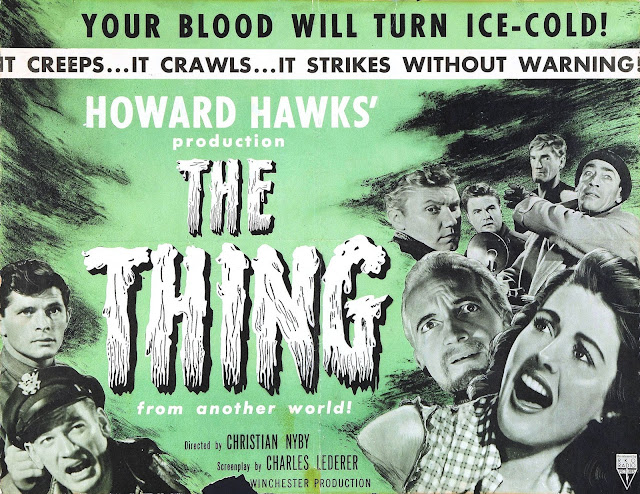 I will say - I was pleasantly not surprised by how well the 50's version works.  It's not necessarily as sheer-terror inducing as the Carpenter version, but - hell - James Arness in heavy make-up was never going to be as scary as the mind-bending freakout effects of the 80's version.

But, like a lot of the best horror flicks pre-Slasher-era, The Thing From Another World is much more about the tension of the scenario than it is about the effects or body count.  That pic above?  Maybe the one clearest pic you'll ever see of the alien.

If you've seen the 1982 version, you won't be surprised to learn the movie is about folks stuck in a snowy climate, far from civilization, who come across what is a crashed space vehicle, and - wisely or otherwise - decide to take the dead alien home with them.  This one takes place up North near Santa Claus versus the Antarctic outpost of the remake.

The Air Force is involved in this version, with well Brylcreemed military folk mingling with scientists, and driving a wedge between the two camps as they try to decide how to deal with a hostile force they don't understand.  Also, there's a romantic subplot - something as far away from the concerns of the 1980's version as I could think of .  Throw in a reporter who is ready to share the story with the world, and who throws himself at the situation from the first report that something is up out there in the white wilderness, and it makes the story about a bit more than man vs. monster.

The movie credits direction to Christian Nyby, but it seems everyone is agreed Howard Hawks was really behind the film.  So, between this and Bringing Up Baby, that's two Hawks movies for me in one night.  Serendipity.  But it's a great example of what happens when an A-List director who isn't stuck in a genre gets their hands on sci-fi material and treats it right.  They aren't taking short cuts, they're not taking anything for granted, and certainly not treating it like "good enough" is good enough.

I'll definitely watch it again.  But, now I want to go back and watch Kurt Russell in a beard.


*I tend to believe we only really become aware of the sheer number of remakes when we get old enough to remake the movies we grew up with, but remakes have been SOP in Hollywood since someone decided sound would add a whole lot to a bunch of those movies they made as silent films.
Posted by The League at 6/21/2015 01:03:00 PM