By the time I was a wee bit older, this was on: 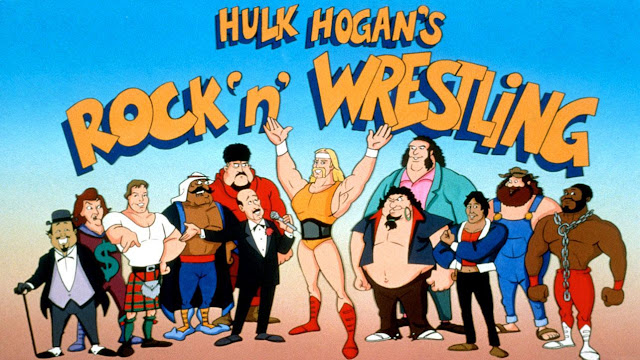 Notice the villains to the left of Mr. Hogan?  Immigrants and Ayn Rand.  Wrestling has it's issues.  But that guy in the kilt was Rowdy Roddy Piper.

He even got a cartoon of his persona as the leader of the bad guys.  That's a thing, y'all.

Flash forward a little more, and I was sitting in a theater watching him star as "Nada" in the classic sci-fi actioner, They Live.  And we love They Live.

Clearly John Carpenter saw some of that "everyman" appeal he was working with at the time, and the movie features that inexplicable fight scene in the middle.

Really, I don't entirely understand why Piper wasn't in more high-profile stuff afterward.  He wasn't going to challenge Dustin Hoffman or anything, but he wasn't totally awful and could have made a bigger career out of B sci-fi movies and whatnot.

I got back into wrestling briefly in early high school, just before a lot of the guys I liked started fading out or dying (wrestling's early mortality rate is astronomical), and even went to two live WWF matches, but Piper was not at either bout.

Then, in high school, I was watching USA Network's late night B-movie program Up All Night (I swear, I was cool!  I was!), and on came Hell Comes to Frogtown, and there he was!  It was a sort of perfect Rowdy Roddy Piper movie... but no one had ever really seen it.

I'll be honest, I hadn't kept track of Mr. Piper in years.  I have no idea what he's been up to, but it wasn't intersecting with anything I was doing.  But it doesn't mean I'm not sad at his passing.  61 is young.  And he was still kind of out there wrestling.  And acting.  And being Rowdy Roddy Piper, in general.

It seems that Roddy Piper has passed.  We're very sorry to hear.  The business seems to take so many so young.

As we bid adieu, here's his WWE entrance video.

Aw man, this sucks. I just listened to him on this podcast and he was as entertaining on the air as he ever was in the ring. He's that guy you love to hate and he was Canadian which made he even more awesome. Take a listen to the attached link for some great stories.