After listening to the audiobook of 2001: A Space Odyssey, I got a rec from one of you (I'll assume it was CanadianSimon, as he reads 3 books a week, it seems) to read Arthur C. Clarke's novel of alien contact in our solar system, Rendezvous with Rama (1973).   In my old age, this is exactly the kind of book that is bringing me back to science fiction after a long, long time of not reading the genre.  But, then again, I was always more of a Asimov-Robot-Novel kind of sci-fi reader and felt like I was really pushing the limits of fantasy with Martian Chronicles by Bradbury. 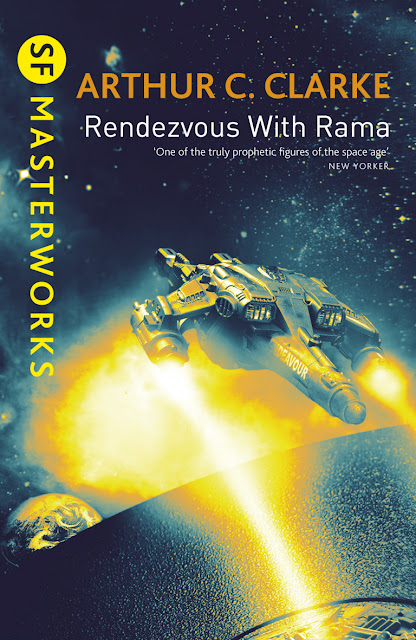 No one is going to accuse Clarke of writing character-driven science fiction, but in imagining both a world in which space travel has become commonplace to the point of interplanetary colonies are treated like nations and how we might react to a truly alien craft entering our solar system (and what it might be like as the crew tapped to take on that challenge) all feels remarkably relevant in 2015 as I am sure it did in 1973 when the book hit shelves.

The story is less abstracted than 2001: A Space Odyssey, and the challenge not so utterly overwhelming that it practically defies human experience and description.  Clarke, here, has imagined both a human technology expansion and cultural shift that is profound, to say the least, as Earth spreads out to the moons of the giant planets and back to Mercury, and the colonies take on cultures of their own.  Space travel is still challenging, but is now comparable to the great computerized vessels of our modern seas.

What is believed to be an uncharted comet enters the solar system, and upon closer investigation, scientists realize the object is cylindrical in shape, and seems machined.  Clarke does manage to give humanity its due, and does not ever give a single point of view to the events as they unfold.  Ideas and fears are debated openly, speculation is tossed around in advance of real information, and, at the end of the day, a workmanlike crew has to land on the damn thing and take a look around.

The ship Endeavour lands on the hull, only to find a convenient airlock, and surprisingly easy access to the massive vessel, approximately 4 kilometers in diameter and 50 kilometers in length.  They will have only weeks to explore, before the ship is expected to go too close to the sun and they'll need to have made good their escape.

Inside, they find an inverted cylindrical world, complete with a sea, curving as a ring inside the ship.  But no life.

From here, the  book is about the frustrations of exploration with no point of reference, of trying to understand the alien world they're encountering that was never set up for them or their reference.  Some mysteries are resolved, others grow deeper.  Exploration is challenging for a multitude of reasons, and, meanwhile, the United Planets watch the continuous feeds coming back from Endeavour with curiosity and trepidation.  Is the vehicle here as an attack craft?  The long awaited sign of the Space Jesus sect?  An exploration vehicle?  Something more?  Something less?

The book gives no easy answers, and yet somehow manages to remain gripping without feeling like an endless tease.

There are innumerable details dropped throughout the book about the state of mankind in this not-that-distant future of a few hundred years from now, some of them tantalizing, some already dated in 2015 (gender parity was not something many sci-fi authors spent much time pondering).  and there's the usual pre-occupation with space copulation, but we do know they're still making OJ from concentrate (Clarke, apparently, no fan of Tang).

I have to say that, while I think Stanislaw Lem's Solaris is a more human and better-written book, for a first contact with an utterly alien world/ culture/ what-have-you, this one is certainly more accessible and asks all the same questions you'd want asked, has pondered both tangible science and unknowables.  It's a hell of a read.

A few years ago if you'd asked me if this could be a major motion picture, I'd have said "it should be, but it never will be.  There's no violence or anything."  But, with the success of some less fantasy-driven sci-fi at the box office in recent years such as Interstellar, The Martian and Gravity, the time is now for someone to throw money at Morgan Freeman, who has been trying to get this produced for about 10 years.  He'd be a swell Captain of the Endeavour, if you needed some star-billing.