It's not always easy living with me.  Jamie has to watch a lot of movies that she might not really care to see.  So, trying to be nice, I selected the Christopher Reeve movie Somewhere in Time (1980), a movie I had seen only one time before circa 1994, and didn't remember particularly well.  But, you know, it was supposed to be romantic and have no monsters or superheroes anywhere in sight, and it has that dreamy Chris Reeve, so I figured I was doing her a solid. 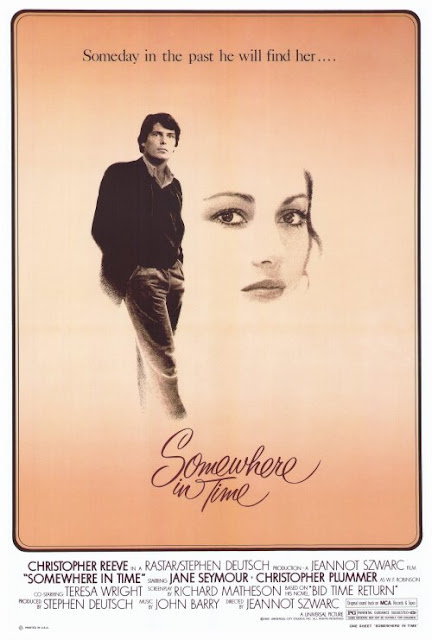 It turns out Somewhere in Time is kinda boring.  It's beautifully shot, and you can't complain that Reeve and his partner in the film, Jane Seymour at her loveliest, aren't doing their jobs.  But...  the script is weirdly hung up on the concept over character.  If I were to be unkind, I'd say that Seymour's entire role in the movie is to be pretty and to stand as still as the photo Reeve's character falls for in the first act.


The movie's premise is far from simple.  In the early 70's, a young Reeve is closing a college production of a play he wrote to great success when an elderly woman approaches him and hands him a watch, telling him to "come back to me".  Flash forward to 1980, and Reeve is now a hot young playwright in Chicago, but his personal life is hollow and a mess.  He heads out of town and winds up at Grand Hotel on Mackinac Island in Michigan.  There, he finds a picture of a beautiful young actress, and he doesn't become so much obsessed as utterly enchanted.  The picture is from 1912.  He does his research, and learns that the old woman who gave him the watch was Jane Seymour.  Upon stumbling onto one of his old prof's books about time travel, he decides to travel back to 1912.  And, indeed, he does.

After that, the movie gets sort of flimsy.  It was like they had this idea, but once there, they didn't really know what to do with it.  They certainly hadn't thought about a character arc for Seymour, she's just kind of perfect.  They're both just kind of perfect.  And the one time there's a chance to learn something about who they are is shown entirely in montage.  MONTAGE.  So, anything we could learn about who they were, why they connected other than "magically" - all done under a John Barry score chained to Rachmaninoff.

Maybe we just weren't in the mood.  Jamie had just flown back in from San Francisco.  But, yeah.  I had my computer out by the 3rd act.

What's frustrating is that all the pieces are there.  An unlikely concept, a great setting, good actors, John Barry... but, yeah.  It's all so kind of oddly frilly and forgettable.  Odd, because it's from the same guy who directed Supergirl.

Of course, I have a hard time pointing to a movie I think is particularly romantic that I actually like.  That's probably something to think about and maybe fodder for a future post.  It's a surefire way to demonstrate yet another way in which I am a dysfunctional human being.

The problem was me, really, because I picked the wrong Somewhere in Time to work with this evening. 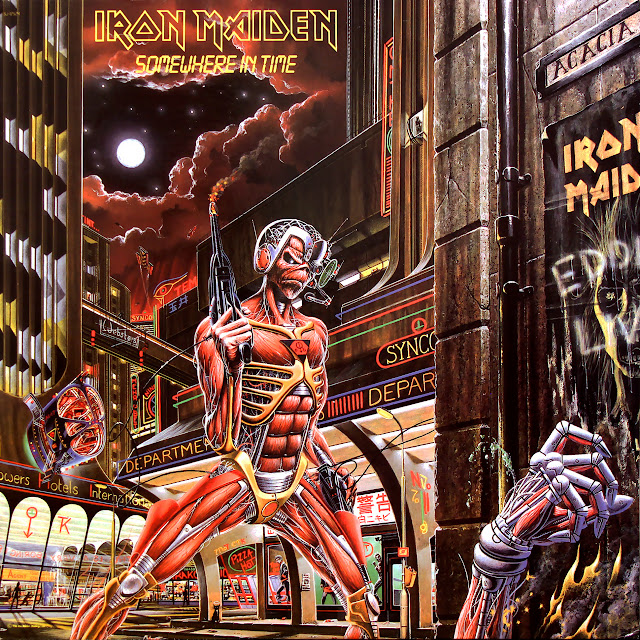 Ugh, what a snoozefest. You nailed my problems with this movie. I do appreciate you trying to select a movie that would appeal to me, and on paper it seems like it should, but it was just. not. good. Getting to look at Christopher Reeve for 2 hours wasn't even enough of a draw.

I remember watching this in high school and thinking it was so romantic but yeah, kind of boring. My friends would likely be surprised as a I eschew most anything that can be described as romantic, but there it is. Caleb says I just like movies where people hit each other. I can't deny that.

The music, though? So good. The bf is playing that piece for a wedding we are attending this weekend. Schmaltzy but good.