That's So Craven! We watch "A Nightmare on Elm Street" and "The Hills Have Eyes"

When Wes Craven died, I realized I'd only seen a portion of his filmography.  Sure, I'd seen Scream and a few Freddy movies, but I'd never seen his two earliest hits, The Hills Have Eyes and Last House on the Left. 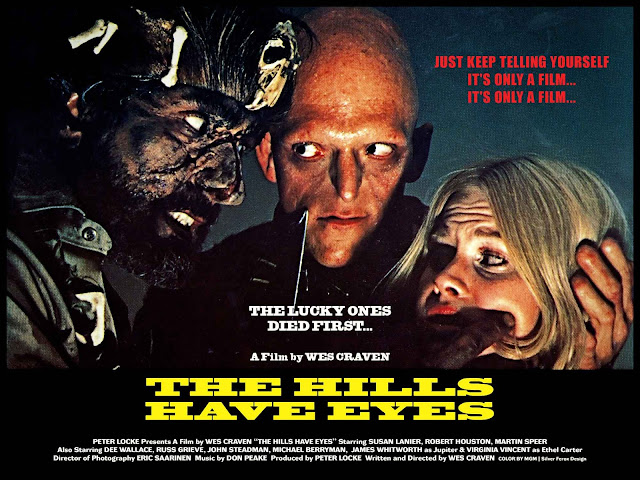 It had been 20 years or more since I'd last seen A Nightmare on Elm Street (1984), and I am pretty sure the last time I watched it all the way through was in high school.  There's no question there is genuine horror and a great bit at work in this movie, but there are also some clunky moments, and we're far from thinking of Freddy as the wise-ass franchise character he'd become in subsequent movies.

First of all, I had absolutely no recollection that the movie's ostensible star is John Saxon, who gets about 10 minutes of screen time, but at the time he was a far more recognizable name than Robert Englund .  The film also flat out states it is "introducing Johnny Depp", and it's really been a mixed-bag with Depp ever since for all of us, I think.

The real star is, of course, Heather Langenkamp who plays the focal teen in our movie about teens getting murdered in their sleep by something that is somehow living inside their dreams, and which is both pissed off and stabby.

I love this idea.  Having someone or something that can get at you when you fall asleep is just a brilliant idea for a horror picture.  And, moreover, having the focal characters as teens who are aware of their situation but who no one will take seriously, perhaps a trope of horror, but it really works here. 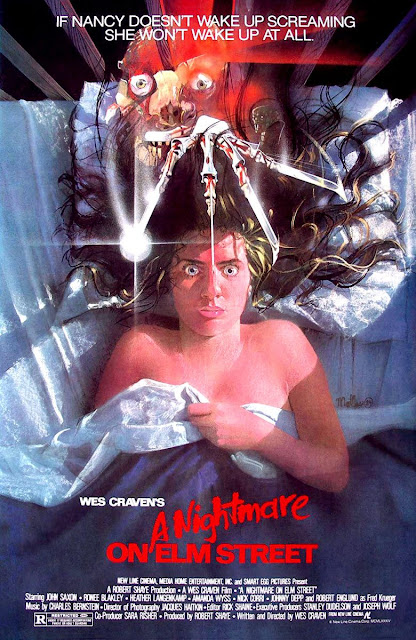 For the first few scenes, Craven really holds back.  I literally had that "well, man, this is way less spooky than I remember" thought as Freddy came wandering down an alleyway with big cartoon arms.  And then Tina gets killed, dragged around the wall and ceiling while her boyfriend looks on, and I said to myself "holy @#$%.  That is @#$%ing terrifying on at least three different levels."

Of course "bodybag Tina" keeps recurring, and that's freaky.  The Johnny Depp Blood Fountain is freaky as hell, not so much when it's happening, which is good, but when it stops and the blood is draining... man.  Throw in that bathtub scene... there's just a lot of well executed stuff here.

If I felt anything was a bit clunky, it was two things:

1.  The reveal of the identity of the killer.  Fred Krueger killed 20 (TWENTY!) kids, and somehow our teen heroes had never heard of him?  I call shenanigans.
2.  On the final night of the story, just an amazing amount occurs in twenty minutes, and I'm not really sure how that slipped past everyone involved.  It seems they trimmed a whole day out of the story or something, but Johnny Depp dies at 12:01, and by 12:20, our heroine is slipping off to slumberland after setting traps, talking to her dad, and a full police investigation is underway.  CONTINUITY, PEOPLE.

I'll forgive that SNAFU, because the movie really does work and uses practical FX to great effect.

I then watched The Hills Have Eyes (1977) which I had never seen before.

Uh, sure!  It was fine!  Not so sure what to say about the movie other than "hey, look!  Dee Wallace and Michael Berryman!"

I'd heard all about the movie before I'd seen it, and so I can't say I was blown away by the premise, but it is 38 years after the fact, so I couldn't really expect a huge surprise there.  What I did like was that it was NOT a bunch of teens getting lost on some ill-advised trek into the wilderness.  It's the rare movie where you'll see a mom who is unforgiveably and annoyingly dumb (which is kind of a brave choice), and the characters don't all get wittled down to a single virginal female.  And our heroes mostly don't make too many illogical errors in order to get mutilated.

The premise is no more nor less far-fetched than any of the "American suburbanites are terrorized when they leave suburbia" movies that still get made all the time, the latest being Eli Roth's Green Inferno (and, arguably, the much-derided Owen Wilson vehicle No Escape in the same sort of premise recast as political thriller).

And there's a bit of Rin Tin Tin in the movie as "Beast", the German Shepherd, is running around saving the day throughout.

I liked The Hills Have Eyes well enough.  It does a great job of building mood, and you can see why it's been imitated so heavily, so I'm particularly glad I saw it in a "movie appreciation" sort of way.  Not very Halloween-ish, as in "haunted house-ish" or "werewolfish", but a good bit of horror of a different sort.
Posted by The League at 10/04/2015 12:27:00 AM

Ruby is a virginal final girl.

Very happy to have finally seen this on the big screen recently, on a film print at that. It absolutely holds up.