Well, this was a nice surprise.  I think a few of you had suggested this one to me over the years, but I'd always look at the poster and think "eh, this is one of those movies with a 'scary' antagonist that's more visually interesting than actually all that scary". 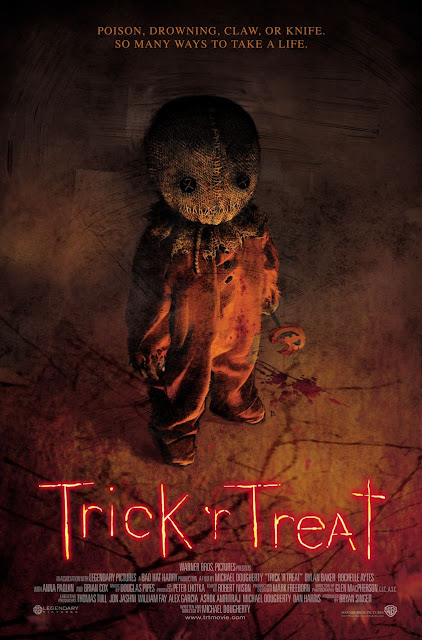 I watched the movie with pal SimonUK, and as the WB logo went up, he said "You know, I think this is going to be one of those movies people wind up watching every Halloween."   Which, about 2/3rds of the way into the movie, I paused the movie and said "yes, I can see why you'd say that, and I think you're right on the money."

If you've not seen the movie and you can stand a little R-rated horror in your life, this Halloween, I recommend you go out and find a copy of Trick 'r Treat (2007).  A lot of horror movies get thrown at me every Halloween, but when I go and read the description, it's really just a slasher movie or a thriller - see: The Hills Have Eyes (1977).  For Halloween I'm looking for ghosts, werewolves, the undead, draculas, haunted houses and castles...  And if we're talking just serial killers, it's at least got to be a wee bit colorful.  I want folklore come to life, weird pagan rites, and people who are not handling it well.  Trick r' Treat delivers on all fronts.

To simplify, it's an anthology movie, but interleaving four stories in a small town on a single night, hopping gleefully between genres and touching on old tropes to make its own mythology out of them all.  And, unlike most movies about a holiday, this one really is intent on being a movie about the holiday rather than people dealing with it or things that happen to occur on that holiday.  From middle-school kids scaring themselves with Halloween rituals to the guy who leaves the bowl of candy out so he can leave, to the girls in suggestive costumes, to the old guy who can't be bothered with all the ruckus...  there's a lot of familiar stuff, and it all goes somewhere.

Our specters , monsters and ghouls are not just out to kill for killing's sake.  They all have their reasons, reasonable or not, and all of them are part of the wider web of Halloween.

I hate to give away anything at all, as I went into this movie completely cold.  And, I'll be honest, the first bit didn't do much for me.  I was ready to grit my teeth and get through it, but as soon as the rest of the movie fired up (really, as soon as Dylan Baker walked onto the screen), I knew I was in a better movie than I expected.

So, see if it's on Netflix or at the Redbox.  It's a good, Rated-R scare that maybe isn't as laugh-out-loud absurd as Cabin In the Woods (a movie I really like, sorry), but it's one I feel the need to share a bit, as I'd dismissed it as another dumb slasher cashing in on a Holiday theme.

And, hey, good news...  There's a sequel planned!  And, before that, from the same writer/ director we get Krampus, an all new horror flick coming this Christmas.  SimonUK and I are already making plans.
Posted by The League at 10/04/2015 08:15:00 PM

If they are not on your list, consider "The Babadook", "It Follows", and "The Nightmare". I think all, but "It Follows" is on Netflix

I was planning to catch The Babadook, It Follows and (I think on your rec) Drag Me To Hell. I'll add The Nightmare!

Drag Me to Hell is a treat. I saw it two days in a row when it played at the Alamo.