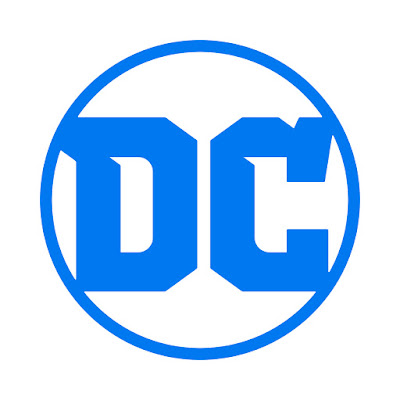 DC Comics has a new logo.

It's certainly not as "we might sell paper like Dunder-Mifflin" as the last DC Logo.  Or as hopelessly detergent-label-like as the prior.  But there's not a lot of standards to go with in this realm.  The big, chunky red Marvel logo isn't really... much of anything, either, so let's not get too excited in the compare and contrast department.

Like a lot of other folks, I looked at the new one up top and said "huh, interesting they went Bronze Age with it".  Because a bit of a throw-back to those early 1970's logos DOES say what you want to say to fans about respecting the past, and the fun of that past - something DC hasn't just had a problem with, but has aggressively trampled over the past 5 years.  But it IS new-er-ish.  They're not just endeavoring into a revival of a period which is remembered fondly, but would make no sense in 2016.  Mostly, unlike the DC Fold, it's also squarely not the sort of thing that would look at home on a box of 3.5" diskettes in 1994, either.  But maybe a loaf of bread from a company that hasn't changed it's packaging since, well, 1974.

But, a logo is a logo and not much else.  And as far as anything I've seen from who is actually working at DC Comics - well, it's hard to get too revved up about Rebirth.  Because it doesn't really matter how good of an idea Geoff Johns had for this one comic - we're now in round 10 with Didio and Co., who have - let's be honest, been given chance after chance in an era when they could have been seeing their numbers explode as a new generation came in to check out comics with the marketing push of the New 52 and interest in comics derived from film (and it doesn't really matter if Marvel movies got them in the store, they're in the store).  Geoff Johns is not writing all of the rest of DC Comics.  And as near as I can tell, no one at DC Comics is losing their jobs right now, so we can still expect the magic of folks like Eddie "Human Tire Fire" Berganza as a Group Editor, just making terrible decisions - both professionally and personally - utterly unable to prove he's done anything successfully with the character that didn't come from him just getting out of the way.

Certainly the promo art for Rebirth suggests a restoration of the pre-New 52 DCU - of some sort.  But, I'll be honest, it's hard to take any of it very seriously.  When DC is willing to bring back the red shorts (and now, the red boots... I mean, wtf, DC?), I'll believe they're at least trying to do something other than, say, change the logo.

While I am heartened to hear Geoff Johns has been promoted within DC Film (after Captain America: Civil War turned out to please fans and critics and seems to have more staying power), that also means Johns isn't going to be spending time at DC Comics proper to help by either writing comics or providing much direction to the materials that will be appearing in the funny books.

I'd say it's worrying, but the overall picture of DC Entertainment has been worrying for years.  I DO think adding Geoff Johns to the film department full time is going to make a big difference - especially as DC Film  re-evaluates the execution of their plans (here's two free ideas, DC/ WB... quit announcing every stray thought you have as a news release, and don't commit to sequels to movies until you know how the first one did).  But, yeah, DC Comics (and Entertainment) has so many obvious and correctable problems in their front offices that no one seems to be willing to address.  Rebirth feels like a bit of panic on the part of DC, they've once again asked one of their "Architects" how to do this comics thing, but Didio has demonstrated again and again, he's no good on the follow through.

What DC doesn't need right now is another stunt or logo - it needs a ground-up overhaul.

I guess we'll see what happens when the new books hit.

Logos are corporate think for strategerie.  I'll believe DC has righted their ship when Superman is back in red shorts.
Posted by The League at 5/18/2016 11:11:00 PM

I don't like it. It's not that I hate it, but I don't like it. And I wish it was at least controversial enough for me to love or hate. Just so bland for a company that's supposed to be selling imagination.

I noticed the Corporate DC site had already put up a more beveled version of the logo: http://www.dcentertainment.com/

But the publishing side is still the stamp: http://www.dccomics.com/

yeah, I'm not in a rush to get a tattoo of it or anything. But I certainly like it more than if I thought it looked like a SanDisk replacement logo.