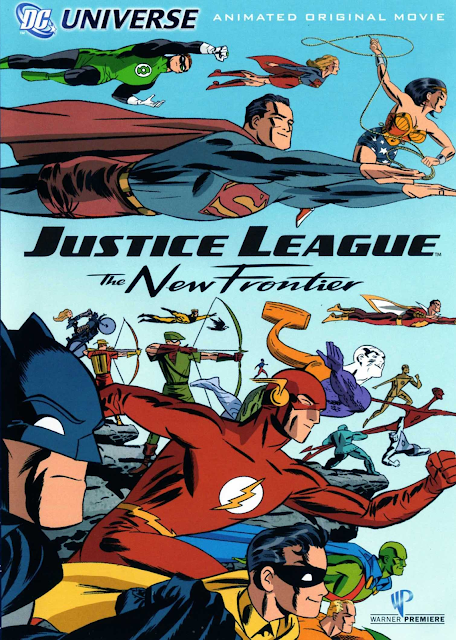 With the passing of Darwyn Cooke, I had my quick appreciation write-up, and on Sunday, as I was eating my oatmeal and pondering the fact I had to work all afternoon, Jamie pitched watching the animated version of Cooke's comics classic, Justice League: The New Frontier (2008).

For a while there, I was purchasing every single new DVD WB Animation pushed out as DC got into the feature-length animated film business.  These days I limit my actual purchases (my last purchase being Flashpoint, which seemed as good a place to jump off DC Entertainment in many-a-ways), but I have a pretty good run of Batman, Superman, Green Lantern, Wonder Woman and Justice League videos.  And, as I type this, why the hell didn't they ever make a Flash movie?  It seems like an obvious fit.

But I don't think I'd actually watched this disk in something like 6 years.


Frankly, I'd forgotten that the threat facing the world in this film is some dark stuff.  For all my complaining about "grim n' gritty", (a) I plan to do a post on just that topic soon, and (b) watching this movie more or less gave me my thesis statement for that post, which may render it moot.

DC Comics have often been scary - and my earliest memories of DC Comics was something of an abject fear of the contents as a young reader.  Something about the "ohmigod, the world is going to end" threats the JLA takes on was discomfiting to me as a youth, from my first JLA issue which ended on a cliffhanger as a seemingly omnipotent guy declared himself 'God" and threatened this Zatanna lady, to Superman dying of a plague and Swamp Thing needing to save him.  It can be some world-crushing, scary stuff to a kid looking for The Super Friends in a comic.

But, as in this story, the climax of the tale is that you can rise up against these seemingly unwinnable scenarios, you can push back the seemingly all-encroaching darkness and be that ray of hope.

The point is - I guess - that despite the threat, despite their differences, the Justice League is about dismissing those differences to pull together and save the day.

The film embraces Cooke's story from the graphic novel, streamlines it and manages it for medium and running time.  It was as close to a straight adaptation as I believe WB Animation had really accomplished up to that point, but some of the sprawling epic feel of the original series was trimmed down, some of the threat amplified and brought to the fore in order to make that "from the page to the screen" translation.

It's well beyond simply a serviceable adaptation, it's downright admirable.  But.  It's kind of like seeing a famous painting on your computer screen or television versus actually seeing the thing in person.  Nuance and context just gets lost.  Even if you see the whole thing, it's not the same as standing in front of an actual Monet water lily or an old master's oil portrait.  Cooke's cartooning is deceptively simple, but those lines in the eyes, mouths, the postures, the flip of a tie or twist of hair is intentional, expressive.  While the characters in the film rely upon Cooke's design and are clearly his, they don't quite ever capture the characters or even the moments and beats in quite the way Cooke brought them to the page.

Still, a hell of a film.  Visually excellent, well paced, and Andrea Romano's voice direction is beyond reproach.  And the movie is simply littered with name talent.