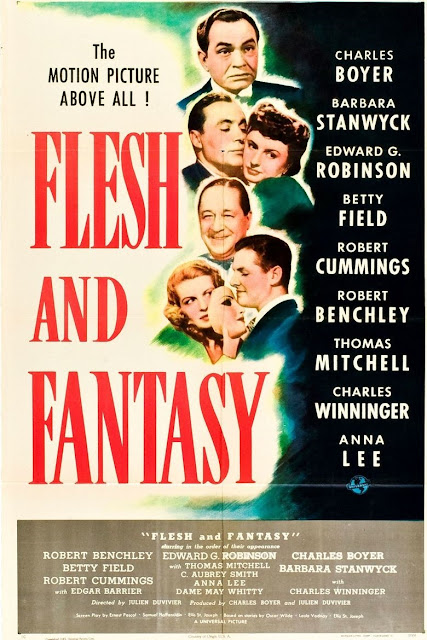 I was intending to pace myself during Noir City Austin, but I wound up getting paced by external forces.  The gameplan for today was to skip the morning shows, sleep in, walk the dogs, go to movies for a few hours in a row, be home around 10:30 this evening.

So, I made it out for the 3:00 - 6:15 double-bill of Flesh and Fantasy (1943) and Destiny (1944), and Jamie had even come to meet me for the 6:45 show of Scarlet Street, but during Destiny, I started getting an upset stomach - which I think was from just a combo of things I ate - and I was all sweaty and clammy and wasn't sure how I was doing, so we went home and I made her watch Criss-Cross instead.

But, man, the double-bill I did catch was pretty terrific, even if Noir Czar Eddie Muller admitted, it wasn't really noir, but more of a rare opportunity to catch a couple of films that aren't really in release anywhere, and that we were watching new prints from Universal.

Flesh and Fantasy (1943) is a fascinating experiment that feels 85% complete, but learning that the film had studio fingerprints all over it explained a tremendous amount.  Essentially three tales hovering between magical realism and pre-Twilight Zone ironic and uncanny, the stories are held together with a studio-created book-ending mechanism of Robert Benchley being read three tales that relate to his current predicament of not being sure whether to believe a dream he had or a gypsy's fortune.

I'm at best ambivalent to Benchley, a guy who was wildly popular in his day, but who's charm and sense of humor always feel a bit like "Avuncular Uncle", and putting a comforting comedic spin on what falls inbetween his segments doesn't bolster the film, it just waters it down.

But the pieces in between are fascinating.  A story of a homely young woman at Mardi Gras who dons a mask to live and try to find love for a night.  Then, Edward G. Robinson as a man told by a palm reader that he will murder someone.  And, last, a tightrope walker who has a vivid dream of falling, and as he falls in the dream, he sees a young woman watching in horror, only to meet that same woman (Barbara Stanwyck) while on a ship en route from England to New York.

In the portions created by the original director, Julien Duvivier, the film is beautifully conceived and - while never feeling exactly natural - does work extremely well in a sort of story-book manner.   It's beautifully shot, never laughs or winks at the ideas of destiny, dreams, or other things a mid-20th Century American was supposed to dismiss out of hand.  Each segment has a clockwork internal logic (much like The Twilight Zone), and stood on their own as short segments.

Despite the Benchley intrusion, I'd still highly recommend the film.  It does feel oddly, barely incomplete, but some context really helps it along. 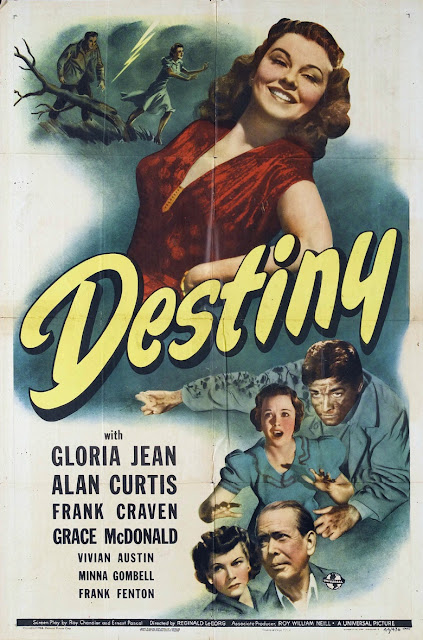 Our showing paired the movie alongside a bit of an oddball supporting piece, Destiny.  Destony featured a portion of Flesh and Fantasy both expanded upon and re-contextualized as an entirely new and standalone film with different directors, etc.. listed.  The original film of Flesh and Fantasy was to be four segments, but Universal cut the first, partially due to disagreeable content that would have caused Code-related issues.  With this odd chunk of film left - not even close to a feature's running time, they decided to expand upon a featured character's backstory and add a different conclusion, all while leaving the original segment intact.

So, for about half an hour we get a movie about a hard-boiled, down on his luck sort of guy who met the wrong dame, got messed up in some heist work by accident, and is now on the run.  It looks like a cheap and quickly shot crime picture of the era, and then the bit shot by Devuvier kicks in, and it's tonal whiplash.  Our accidental bank-robber is still in the film, but instead of the hard-scrabble hills outside of LA, we're suddenly in a magical, ideal pastoral setting and a tale about a low-life coming across a virginal purity so amazing that the young woman is literally in tune with nature.  Snow White's got nothing on this girl.

I can't actually recommend the movie without pairing it with Flesh and Fantasy, but Destiny is a fascinating film not because it's successful, but because of how the artist versus the business people behind the studio so obviously clash - producing this split-personality film.
Posted by The League at 5/21/2016 11:23:00 PM