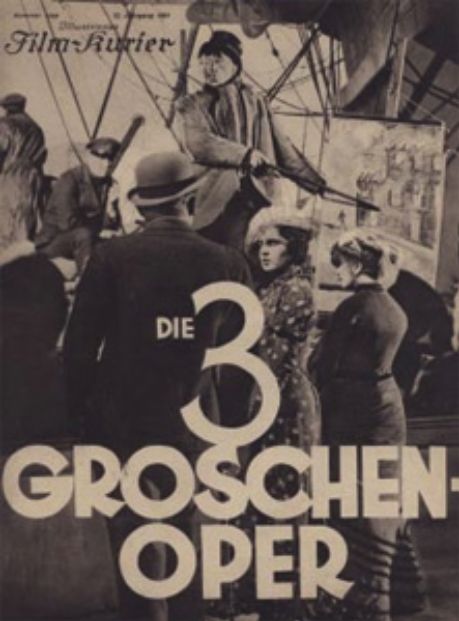 Obviously near-post-silent German film isn't my usual deal, nor Brechtian musical comedy.  The closest I'll get to that is a fondness for Fosse's Cabaret and that I have all of the albums by The Dresden Dolls.  And, you know, Tom Waits and others have carried through the spirit of the movement through to the modern era.

I haven't seen much in the way of G.W. Pabst's directorial efforts, although I'm well aware, from film school, he's one of those names you're supposed to be able to drop.  He was a giant of German cinema in the pre-Nazi days, and brought Louise Brooks out of Hollywood and over to Weimar Germany, and I've seen Pandora's Box.  A contemporary of Fritz Lang and F.W. Murnau, going to the pictures in Germany back in the day must have been something.

The movie is an adaptation of a popular German play of the same name by famed playwright Bertolt Brecht (and music by Kurt Weill), which itself was an adaptation of an 18th Century play, The Beggar's Opera.  In the 21st Century, the most relevant bits of the play still floating around in pop culture, to my knowledge, are the evergreen hit Mack the Knife (which opens the film, with even more brutal lyrics) and the lesser known tune, Pirate Jenny.  Of course, in the film, all is sung in German.

A cursory reading of the play's description tells me there are some changes to the plot from the original play (or the original, original play).  Both take place in England, following an arch criminal named "MacHeath" (aka: Mack the Knife).  He meets and seduces a young woman, Polly, who seems to be slumming in the shady bars where Mackie and his gang hang out.  But at their underground wedding (in a commandeered warehouse in the wee hours), Polly reveals she may not be so naive and may be as gritty as any of the gangsters in her own way.  Her father, it seems, is a sort of King of Beggars who has organized the poor, costumes them properly for effect and tells them where to go to get the most money.

There are singing hookers (see:  Jenny), a sort of chorus that brings us "Mack the Knife", and a few songs from other members of the cast.  This being 1931, the musical form hadn't entirely been worked out yet, but you can feel it's 85% of the way to what it would be.

What's most eye opening about the film is that, clearly, German cinema had none of the concerns of middle-America of the time, and the movie is as bitingly satirical, cynical, and sharp edged as anything produced in the modern era.  If watching older films leaves you believing audiences were wide-eyed and silly - I've got a movie you might want to give a whirl.

No, the form of the movie doesn't feel entirely modern - although it has some stunning camera work and isn't as frozen as a middle-shot as American films of a similar period might have been.  Pabst moves the camera and understands shadow and light in a way still being sorted out in the states, even as they tried to borrow from the Germans.

It's a fascinating bit of film, and I'd be extremely curious to see a live production, especially as the story of the play seems a bit more complex.

Review Hell Comes to Frogtown. Make me understand it.

You need to just welcome Roddy Piper into your heart. Then, and only then, can you see The Truth Path of Frogtown.