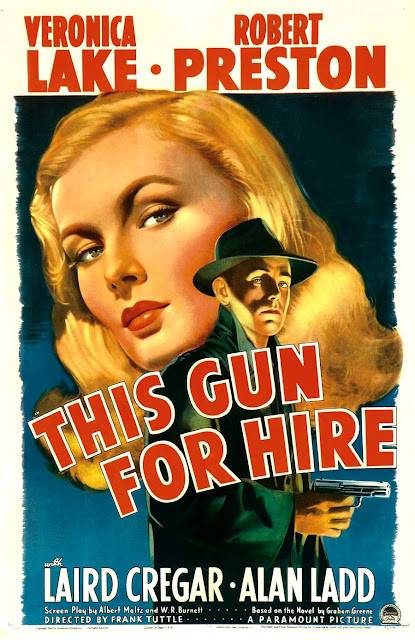 This weekend I'm attending the third Austin Film Noir Fest, or, at least, a good chunk of it.  It's going on down at The Alamo Drafthouse Ritz on Austin's famed 6th Street.*

It's gonna be interesting but a bit of a marathon as each showing is a double-bill, and there are three showings on each day Saturday and Sunday.

The whole deal is hosted by Film Noir Foundation founder and President, Eddie Muller, whom you may have seen on TCM last summer, in interviews about the film noir genre, or popping up wherever film noir is found.  Muller is a terrific author (from what I've read) - writing scholarly works on the genre.  He also works to promote the preservation of film noir, restoring films and uncovering lost movies.  And, I really think he and the Film Noir Foundation have been responsible for a resurgence and growth in interest in noir beyond the 10 or so films folks name-drop when it comes to noir classics.

This evening's pictures included noir staple (and a personal favorite of mine), This Gun for Hire (1942) and a far lesser known film, Fly-By-Night (1942).   The idea is that each bill is an A and B picture from the same time period in the history of noir, so you can see a growth in the genre's development.

This was probably my 6th or 7th time to see This Gun for Hire, starring Alan Ladd, Veronica Lake and the sadly not-well-remembered Laird Cregar, who is perfect as the foppish "Gates" in the movie. It seems I've not watched the movie and written about it at this site - and that's too bad for you, because I have to write up a ton of movies this weekend, and I just can't find the energy to talk much about this movie. 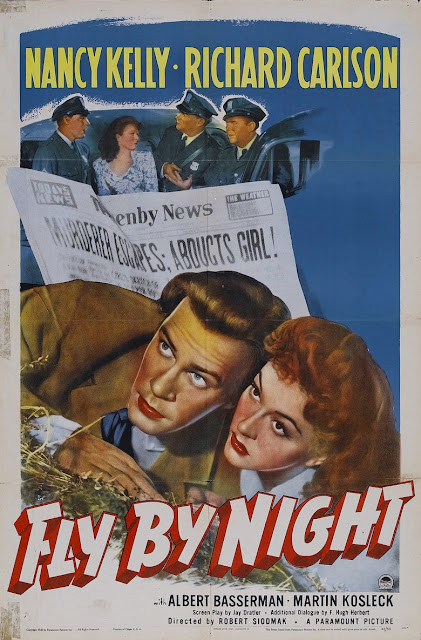 Fly-By-Night was directed by the terrific Robert Siodmak, but you're unlikely to know the stars, Richard Carlson and Nancy Kelly.  I've seen Creature From The Black Lagoon, like, 8 times, and didn't recognize Carlson as in that picture, as in this, he's far upstaged by his female-counterpart.  I did sort of recognize him from It Came From Outerspace, but... yeah.

Anyway, I quite liked Nancy Kelly.  I'm a bit bummed she's not in more stuff I've stumbled across.

It's a MacGuffin film, with our hero chased for having a bag-check slip that holds the mystery of "G-32", whatever that might be.  Bad guys want it, they make it look like he's killed a man who just kidnapped him, and to get away, he makes off with Nancy Kelly.  It's complicated.

Both films were war-time movies, and both rely on the notion of folks stumbling into the machinations of fifth columnists.  Whereas This Gun for Hire is mostly deadly serious, Fly-By-Night is genuinely pretty funny, and I'd recommend you catch it sometime, but apparently we watched the only loaner print on file from Universal, and the film doesn't play on cable and isn't on home video.