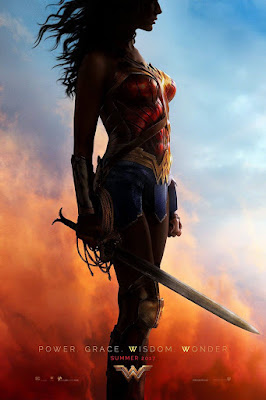 Pretty clearly DC/ WB are reacting to the "why is this Superman movie so miserable?" question that hung over Batman v. Superman (no, I haven't seen it yet).   Matt at Eyes Skyward keeps calling Batfleck "Danny Ocean", but I see it more of a Yul Brynner in The Magnificent Seven.  And, honestly, he seems pretty likable as this version of Bruce Wayne (although I have mixed feelings about him approaching anyone as Bruce Wayne and immediately exposing his identity to people he does not know).

I hate the fact that we end the trailer laughing at Aquaman.  It's the same sort of "I don't know how to deal with this" that led to Superman leveling Metropolis and Batman running over crooks.  It's aimed way outside the comics fans who made that joke on day 1 of comic fandom, and just shows how uncomfortable they are making this movie.

The oddest thing about both DC trailers is how maybe obvious or perfunctory they feel.  We scattered Nick Fury's recruitment of the Avengers across multiple movies, so when it came, we didn't have to spend time slogging through the recruitment of the Avengers and, instead, got right into it.  By the time Justice League arrives, we'll have three characters introduced, but need to spend time on Aquaman, Cyborg and The Flash.

I like the look The Flash here, even if I buy the TV version of the suit a bit more.  I don't know what I think of Cyborg's look.  It's not very streamlined, is it?

After two seasons of Daredevil and a highly successful season of Jessica Jones, I'm less interested in the comics adventures of these characters than I am in what they can do on the small screen.  Netflix has given Marvel an amazing sandbox to play in with their NYC-based characters and it's been some shockingly good TV from right out of the gate.  The kids will never know how unlikely all of this seemed just ten years ago, but here we are - with a full slate of B thru D list Marvel characters with shows coming.

If you watched Jessica Jones, you've seen Mike Colter as Luke Cage, and that's as strong a recommendation I can make for the show as anything.  The guy doesn't just have the physicality required, he has the presence of a scarred-but-smarter hero.  I have no idea what they'll do for a plot here, but with Colter as our lead, I'm in.

Our first of two of Marvel's potential problem with white-washing a character.  I don't really get why Iron First wasn't re-imagined as an Asian dude, as the character was always about co-opting the kung-fu characters of 70's cinema and comics into a more relatable figure for white-bread America.  But with Marvel now well into their character pile, we don't yet have an Hispanic or Asian central figure in the line-up.

I know Danny Rand is a white guy in the comics, but I also don't know how central that was to his character.  Of course, it'd likely be seen as racist to make the one karate guy an Asian dude.

I also know almost nothing about Iron Fist as the character hasn't really been all that popular, and I've never picked up a comic because it starred Iron Fist.

Your guess is as good as mine.

I suppose this looks as much like a movie (right, we're talking features again) that might interest me about a magic dude as is likely to happen.  Yeah, of course comparisons are made to Inception, and that feels fair, but that's some of visual aesthetic, not the plot, I'm guessing.

Folks have been pretty wound up about Dr. Strange's roots in the pulp-ideal ideas of mystics living in the snowy mountains of central Asia and the recasting of "The Ancient One" as Tilda Swinton.  Again, I'm not sure people wouldn't also be hammering Marvel for casting an old Asian guy as an ancient mystic and saying "you could have cast anyone.  Tilda Swinton!  Who wouldn't think that was a good idea?".

Look, the fake-Marvel-world is a complicated deathtrap of your grandparent's ideas about race and magic and your desire for PC perfection.  I can't help all of this.  But I notice none of you freaked out when Batman was learning to become a ninja from a white guy playing a Middle-Eastern guy in those same snowy mountains, so everyone chill the @#$% out.

I am also more or less ignorant of Dr. Strange as a character aside from throwing around a few character names.  As a young Signal Watch, I just didn't see Dr. Strange doing anything I reallyc ared about.  I kind of think stories about wizards have a way of eating their own tail and becoming about the rules they've set up for wizards to begin with, and sometimes that works and sometimes it doesn't.  I just didn't care about a Magic Guy who didn't seem to interact with anyone who seemed remotely human.

We'll see how that translates to the movie, I suppose.  I had the same issue with Thor as a kid, but I liked both of the movies.

It looks to me like they're making the original movie into two films, which actually makes sense.  Peter Jackson tried to expand the original King Kong to fit modern sensibilities and wound up with too much movie.  This gives us a chance for a movie just on Skull Island.

Do yourself a favor and watch the original starring Fay Wray somewhere before this movie comes out.  Then, watch the Jessica Lange version, because that's really solid, too.

What is... surprising is the scale of Kong in this movie.  Seems like they really want the showdown with their new gigantic Godzilla even if it makes Kong taller than the Empire State Building.
Posted by The League at 7/24/2016 09:53:00 PM

Did you know that the Kong movie and the Godzilla movie are in a shared universe? I think there's going to be a Kong/Godzilla movie in the near future.

"What is... surprising is the scale of Kong in this movie. Seems like they really want the showdown with their new gigantic Godzilla even if it makes Kong taller than the Empire State Building."

Ugh. I was overeager. Sorry.