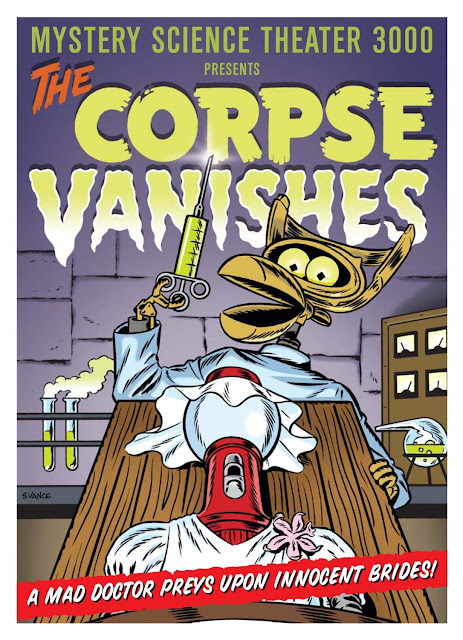 The day I first saw MST3K was the same day my folks told me the family was moving to Houston from Austin.  But, to make it one better, my brother would not be coming, he'd be staying in Austin with friends for his senior year (my folks were oddly progressive and fair-minded folks).

It was a strange day, to be certain.  In order to soothe my nerves, my folks then took us to see Glory, the 1989 Civil War film in which literally everyone dies (spoiler).

A bit shell-shocked, upon arriving home again, I wandered back into the house and turned on the TV.  I was flipping channels and saw a weird shadow on the bottom of a screen.  The shadow was talking to an old, terrible looking movie.  I finally got other folks drifting in the room to shut up long enough to stop telling me to change the channel, and we watched the show with the robots and whatnot, and my day was improved.

I finally tracked down the episode by airdate (clue!  Glory premiered on December 15th, 1989), and context clues (Lugosi!  Mad science!).   The internet states that the episode The Corpse Vanishes (1942) originally aired December 9th.  But I am also pretty sure that The Comedy Channel where the show was airing showed just before another episode, so it was likely a rerun leading into the new episode on December 16th.

The joke I remembered, that seemed so hilarious, was a car taking off with a motorcycle escort, and someone yelling "Ponch!  John!  Follow!".  This joke does, in fact, appear in the Corpse Vanishes episode.

And, hey, what do you know?  The movie stars Bela Lugosi playing a mad scientist living in a spooky old house with a slow-witted assistant and pursued by an eager girl reporter out to prove her mettle.  The plot is distinctly different from Bride of the Atom, which came along 13 years later, but you can't blame me for an honest mistake.

The movie itself is pretty awful, especially in the second half, a low-budget horror flick that points more toward what was happening with Lugosi's career already by 1942 than anything resembling his more famous works.  It drags like crazy and, obviously, is in no way really scary.   When the 4th or 5th bride happens to keel over in her overpriced dress, our girl reporter smells a story, but her editor, of course, thinks that it's all a bunch of malarkey.

Basically, Lugosi is killing brides on their wedding days and somehow using their young-lady powers to keep his wife young and beautiful-ish.

Now that it's been a couple of weeks, I had to look the movie up to see how it ends again, and, eh.  It wasn't all that bad of an ending.