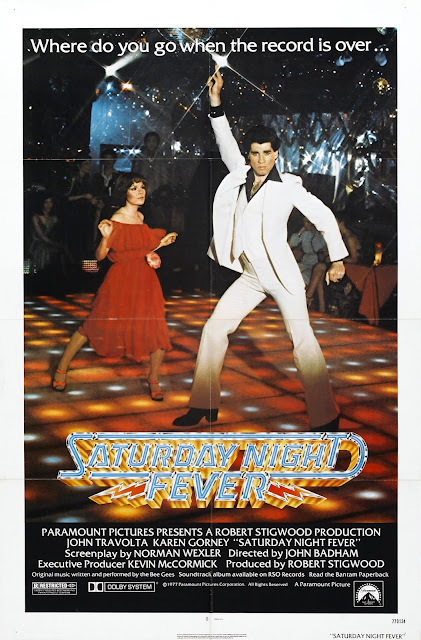 It's difficult to say how or why I wound up watching all of Saturday Night Fever (1977) on a Saturday night.  I will also very quickly disabuse you of the idea that I watched the movie ironically.  After roommate CB showed me the movie in college, I realized it's actually a straight up decent movie about a young man realizing what is and is not important as he crosses the threshold from youth into adulthood.

Directed by John Badham, responsible for a number of projects good and less so, and starring John Travolta (with a small role for Fran Drescher), it's a movie that maybe is a bit ham-handed in handling some mature themes - and can tend to drift into a sort of PG-13 After School Special territory with cause and effect consequences and moralizing I associate with the era as movies stopped talking around issues and addressed them directly.

Really, the movie is about a working class kid with some old school parents who are not-so-quietly struggling with changes themselves and his brother leaving the priesthood.  Plus, girl issues, overcoming some troglodyte-level thinking about sex and women, and a bunch of guys realizing they might not be going anywhere (and not all of them helping themselves).

I'm not sure how much of the movie is based on anything actually happening in Brooklyn at the time of the story, but the high energy dance numbers, sexiness and seeming working-man charm led to an explosion of the disco scene across the US.  Hell, three of the first vinyl records we had as kids included the Saturday Night Fever soundtrack, Disco Duck, and, of course, Sesame Street Fever (with the classic "Me Lost Me Cookie at the Disco").

I do wonder how much of the violent death of disco led to the long drought in the career of John Travolta.  Because there certainly was some inevitable backlash to the genre.

But if you haven't seen the movie and assume it's all camp dancing in a disco - it's only partially camp dancing in a disco.  And, honestly, not only is Travolta an excellent dancer, they do make it look like a pretty good way to spend an evening.  As someone who grew up in a state with Country and Western line dancing taught in PE classes (you gotta get people ready for awkward weddings, somehow, I guess), it all seems a little familiar.  Only with a kick ass beat.

It's probably worth noting that Urban Cowboy is pretty much a direct genetic descendant of this movie, but reflects a lot more about growing up in suburban Houston than we're supposed to talk about.  So, John Travolta cornered the market on these movies, I guess.

If you were around in the 1970's, it's hard to explain how far and wide the soundtrack to this movie reached.  It made huge stars of the BeeGees, and even after the magic of the disco era faded, you would still hear a lot of these songs on soft rock stations favored by moms and receptionists everywhere well into the 1990's.

It's possible that American culture actually hit its high water mark with disco and everything since that has been degeneration. By the 90's the kids were just punching each other in mosh pits.

I leave you to use this information as you evaluate
http://www.cc.com/video-clips/wn3ynw/drunk-history-steve-dahl-s-disco-demolition