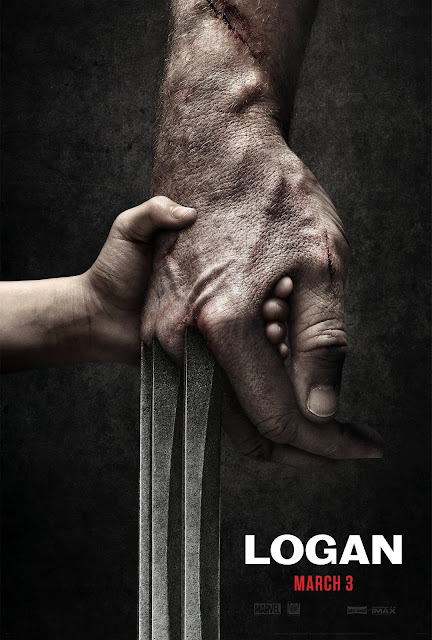 
Set in a near future that has not seen the appearance of another mutant in the genepool in about ten years, Logan now spends his days as an Uber driver in El Paso, crossing the border regularly to aid in caring for an ailing Charles Xavier - the world's foremost psychic powerhouse now suffering from a degenerative mental state and tremors.

Logan himself is no longer the unstoppable powerhouse he once was.  His powers seemed to have diminished, the booze is now working (and being consumed by the bucket load), and even his claws can't get it up like they used to.

A woman approaches Logan, asking for a ride for she and a young girl she has with her, to get them to a safety point along the Canadian border.  Meanwhile, a paramilitary unit outfitted with plausible cybernetics, appears to stop our Marvel Marching Society from going about their business.

What's curious about Logan is that it doesn't operate like a superhero movie or an espionage thriller.  While the powers and abilities and mutant-ness of the protagonists is a driving factor, one can imagine how the script might have worked as a science-fiction parable of another flavor, or - greatly reduced in scope - as a modern throwback to the Western genre (to which the movie gives a massive, unsubtle nod).  As I said - unlike the most recent X-Films, which have done little to retain the state of mutants in society as an analog to existing societal challenges, they've more or less straight up just gone into the movies being about the movies - the greatest sin of comics.

The plot absolutely hinges on X-stuff, we haven't moved into X-Men: On Golden Pond quite yet.  But as in the best sci-fi and fantasy, it's how the characters are brought forward by their situation that makes it work.  Our villain is still a mad-scientist with henchmen, but it feels almost more like the forces of the establishment than an outsider seeking to disrupt the status quo.

I was actually a little giddy to see The Reavers appear in a movie (I kinda liked them as trash X-Men villains in ye olden days of X-reading), and while I'm unfamiliar with X-23 aside from what I've seen online, if you're going to go that route - this was deeply satisfying.

What doesn't hurt is the reduced size of the cast, the unlikely duo of polished Charles Xavier (now heading a cranky grandpa/ reduced mental capacity 90-something) and Logan, a born fighter whose body has quit on him.  But, really, Patrick Stewart and Hugh Jackman get to do a bit more than spew X-Men mumbo jumbo at each other or drop wisecracks.  And they pull it off phenomenally well.

On fb I pitched the idea that Logan is a metaphor for Gen-X'ers (our current crop of middle-aged folk) reaching the point where youth is in the rear window and we're struggling to maintain, even as we're foisted with kids and keeping an eye on the parents.  Comics mostly only dwell in the arena of the teenager to the 35 year old (I'll argue current Superman of the comics is 43-ish, but whatever), making romance less complicated, parents nice people who live somewhere else (or are dead, because comics), and bodies are functioning at superhuman levels.  It kinda works as an idea, but boy howdy, is it relatable to know what you once could do that you'd kill to be able to do again (I remember jumping down full flights of stairs.  Now I take them carefully one at a time.).

Other folks chimed in with overstep of government and living in a world in which we see the erosion of the values we once held dear.  Which:  yes.

And that's the difference between this movie and so many others - it's good enough/ layered enough that it can handle all of these ideas, and isn't literally just about what a terrible idea it is to take on a 70 foot gorilla when you're trapped on Monster Island.

The movie is oddly moving, and not just because I love Shane.  But while I enjoy the X-films for what they are, I don't feel connected, particularly, to anyone but Magneto when I'm watching the movies (they've done a terrible job of making it seem like he's wrong).  The same emotional investment I've reserved for the Cap films (which I feel is earned in every one of those movies) was suddenly applied to Logan here at this late date.  I have to tip my hat to all involved for that.

I am possibly not *quite* as bowled over as many other people, but I absolutely do respect what was done here, and  - if it's true this is it for Stewart and Jackman on the X-franchise - what a way to go out.

There's plenty more to say on this one, but that's what the comment section is for.


*Which, of course, always surprises me - in no small part because the comic book that truly made me a monthly comic book reader was Uncanny X-Men under the pen of Chris Claremont, a guy who may have been master of purple prose and the tortured phrase, but who imbued the residents of 1407 Graymalkin Lane with distinct personalities and character, taking the Marvel formula and expanding upon it in places I *still* don't see replicated anywhere in comics.

Hugh Jackman and Patrick Stewart actually got to do some acting in this flick, and it was a great way to finish out Jackman's involvement with the character. It sort of reminded me of Dark Knight Returns in some ways, both because it occurs later in the life of the characters, of course, but also because it does a great job of creating a logical arc depicting where you might see these people and their world ending up as they enter their later years. I also appreciated the sort of post-modern feel of the movie, with the "real life" Logan snarling in contempt at the way that his life has been fictionalized and glamorized in comic books and popular culture. (The romance and sheen of youthful adventure having long been replaced by a weary awareness of the sacrifices and scarring of battle) I thought that the movie did a good job of portraying the idea, though, that even in his declining state, even though he really wants nothing more than to be left alone, Logan remains the kind of person who ultimately feels compelled to do the right thing, regardless of the cost. More than winning another fight, the real struggle of the movie seems to be that Logan is fighting to define his own life before it ends.

yeah. It's a deep understanding of what makes the character work, which was on full display in the first X-film and got more and more diluted as time went on. Here he's at war with himself and those instincts - I mean, you have to know he doesn't think that helping ever actually works out - but there he is again. It's a hell of a character study.

Saw it last night and was impressed. Affected, even.

Went with a friend my age (early 40's) and he brought his Mom and teenage daughter, so the whole inter-generational theme that played out was very appropriate.