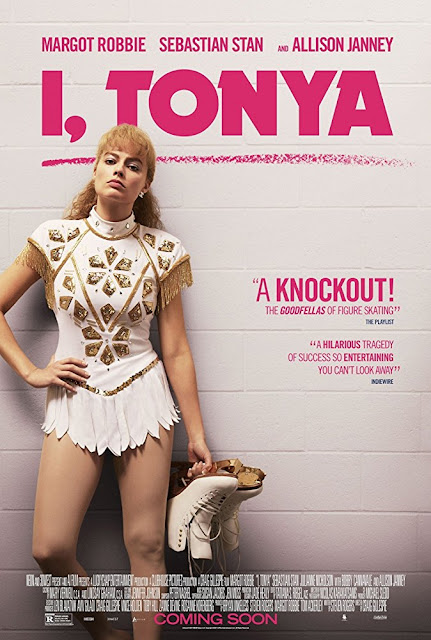 The Tonya Harding/ Nancy Kerrigan kerfuffle was the first time I remember thinking the media had lost their damn mind.  My Freshman year at UT Austin, my roommate brought a TV, and our daily routine (if we weren't in class) was to come home, watch cartoons with floor-mates and then watch the 5:00 national news before dinner.

By this point I was 18 - pushing 19 - not much of a fan of ice-skating or any winter sports.*  Plus, I was in college and wasn't planning to watch the Winter Olympics.  But once the story broke, every night the national news was spending large segments with updates on the story.  We all had our opinions, and they were mostly formed by the spin in the media.  But, it was crazy.  This wasn't HUAC coverage, this wasn't a war in some Middle-Eastern country I'd never heard of.  This wasn't something going on in D.C.  This was tabloid garbage, and it was f-ing *everywhere* for months.  I'd never seen the news cover something of so little consequence to the nation with such fervor - but I was also aware they wouldn't be doing it if it wasn't driving ratings.  I had no idea where it would lead, but it certainly marked the first time I lost some faith in the media.

Back then I was in the right age range - close enough to Kerrigan and Harding - to make some snap judgments.  Not the least of which was an immediate and - as history would play out - not incorrect assumption that Kerrigan was not the angel that the news painted her to be.  She just seemed a bit like a B.  At least Harding just seemed in over her head, and if she'd done something kind of awful, it was at least *interesting*, which was not what I considered figuring skating.**

I do remember that as details came out - Harding was already divorced at 23 but hanging around with her ex husband and his weird friend...  Well, it was all a lot of data that pointed to a particular lifestyle I knew from folks living a bit more "country" in the Houston suburbs.  I started to believe that she hadn't been directly involved.  Everything about the attack seemed like something someone with no sense of perspective or grasp of consequences would do.  A competitor would settle things on the ice.

Once it became clear that maybe Harding hadn't concocted the plan, the press' details got fuzzier  and fuzzier and finally the story got dropped.  OJ came along and we did that for the next year and more (oh, god... the OJ trial).

In 2002, Jamie landed a job in Phoenix, and she moved out there before me while I packed and closed out my job.  During that window (this was on the heels of "Who Wants to Marry a Millionaire?") Fox aired Celebrity Boxing, and one of the matches - and this is the most 90's thing ever - was Tonya Harding versus Paula Jones.  Right out of the gate, angry former pro-athlete Harding just destroyed secretary-turned-professional-plaintiff Jones.

That fight - which I started watching kinda buzzed and in a good mood - made me terribly sad.  It was my first, non-ironic-detachment look at Harding...  and I felt awful for her.  Nothing about it was funny.  By then I knew what it took to be an Olympian, and this was what she was doing.  While Tonya Harding is not the first thing I think about when I wake up and the last thing I ponder as my eyes close for the night, but as details have leaked out over the years of her pre-1994 and post 1994 life, I've wondered what the hell actually happened.

I, Tonya (2017) is a surprising movie, not just that someone thought to make a movie about Tonya Harding at this time (I mean: why?), but that someone decided to actually portray Tonya Harding as a person; something the press sure as hell couldn't be bothered to do in the last two-plus decades.  It is a movie, not a documentary and not journalism.  It features an audacious script, terrific direction and DP work, Scorsese-esque editing, and all-star performances from Sebastian Stan, Margot Robbie, and the always nigh-perfect Allison Janney - it's tough to know how much the movie deviates from facts.

The movie is, sort of, about facts.  But what I'm not a genius for figuring out, because it's in the trailer and in the film's discussion, is that the movie is about truth.  The truth of Tonya Harding's story is - as all real stories are - not entirely the selection of facts that made up the news coverage of 1994 or the years since.   Instead, under the guise of an ironic, cheeky comedy, the filmmakers have somewhat sat us down to bear witness to, to show us a living, breathing person rather than the late-night show punchline she became (if anyone had anything on Harding, did it not occur to all of us that she would have done time?).   It's also a movie in which the audience - at least the audience old enough to remember watching the news and follow the story as it unfolded - is part of the story.  And, fellow people with shared cultural memories of 1994, we do not come off looking super great.

In a pre-Kardashian/ pre-Jersey Shore world, we made our own reality TV through the exploitation of what should have been spotty coverage of a "man-bites-dog" story of the freak attack on a promising skater and the quick unraveling of the circumstances that got us there.   The movie doesn't leap straight there - we get a lot about Harding's personal history, told from real interviews with Jeff Gillooly and Harding.  Interviews portrayed by Janney, I think we have to assume are dramatized.  But the kaleidoscope of takes on Harding's rise holds as it sticks to facts and a shared timeline.   That Harding didn't leap into existence when she leaped into our consciousness meant that maybe we all missed - or didn't care about - the context of what led to Harding's scandal.  And in 1994, assuming anything about someone so obviously White Trash, was even more of a conscience-free enterprise than it is today.

Jamie pointed out, as we drove home, that I'd been making noise about how cinema so seldom portrays anything below upper-middle class***, and that this film, although not exactly fictional, hit that criteria.  I, Tonya was, in fact, mostly about that part of America that makes up so much of the country but isn't how we think of ourselves, if what's on screens big and small is any indication and how it places so much out of reach.  If I wondered aloud if the Foreign Press that vote on the Golden Globes actually get this slice of un-romanticized American working class, it's that I'm not sure folks from outside the US get that it's not all wealth and fabulousness and just like the movies.  Or if they, or ourselves, want to spend two hours feeling vaguely ill-at-ease over everything from income inequality to irresponsible press to the machinations of ice skating to how abuse works.  We were promised a wacky comedy about incompetents, and that's there, but...

The film makes nods to the rise of the 24-hour-news cycle and the media's fumbling attempts to fill the time (the answer was the original format for Headline News.  It was always Headline News.).  Cursory mentions are made of the weak scoring system in place for skating - something obviously either corrupt or utter nonsense to even the most casual observer - taken down by a scandal in 2002 that put an actual semi-objective system in place.  It more or less leaves Kerrigan untouched, a casualty of other events, but not someone to pull focus.  She exists in the film only in pieces.

It's not incorrect to draw comparisons between this movie and Goodfellas.  There's a lot of history that leads to a major event or two.  The management of time, the cinematography, music, editing, etc... seems to have used some of that movie as a template - but it's not a crime picture.  Nor is it an early-Coen Bros. comedy of errors.  But it is terrific to see these kinds of technical chops at work in what could have been (and has been) relayed in TV-movie stiff-straight-forward style.  Frankly it's very nice to see a movie light on CGI (I expect there's plenty to learn about CGI vis-a-vis the ice skating sequences) that is flat-out so technically sound.

Again, the cast is excellent.  Janney is Janney, but I am also delighted that in a few short years, Margot Robbie seems to be able to not just disappear into roles - she's also a producer on this movie.  Smart kid, that Robbie.  She may outlast everyone else.

Some time during the second half of the movie, I had the realization that I, Tonya will find its place within the movies I'll watch any time they show up on TV, any time they're on.  Whether I'll ever own a copy of the movie, I can't say - but it's spot on again and again in the choices made behind and in front of the camera.  That it took a story we all knew and turned it around on the audience so utterly convincingly is no small thing.  And this is exactly the sort of thing I think I'll dive into for a bit, and next thing I know it's 1:30 AM and I'm kicking myself.

Harding herself has been appearing at screenings, and I believe she was seated at the Golden Globes.   That she'd get this shot at telling, decades on, her side of the story is a rare opportunity.  That the film refuses to let the audience off the hook when it comes to complicity in the events of 94 and afterwards is...  kind of amazing.  Whether the film is factual, I can't say.  I'm not going to spend the next few weeks reviewing the case.  That it's a version of the truth, and that Tonya Harding got her say without the management of network news anchors and producers, from tabloid TV and papers...  anyway, I hope Tonya Harding is having a good 2018.


*I grew up in Texas, and ice skating was not on the menu.  For Olympics-stuff, we lived only a few miles from Bela Karolyi's gym, so if I was going to pay attention to something I kind of sniffed at as a non-sport-sport, it was going to be gymnastics.  I saw one or two of the then-name gymnasts around.  They're super short.

**I've now lived with Jamie for just on the edge of two decades, and watched a lot more skating, and I am far more generous to the sport now than I was then.  Now I can't think of any sports I roll my eyes at.  (that said, gymnastics and skating have both de-mystified their scoring systems, and neither  now carries the feel of utter BS)

***I was struck by one of the trailers prior to the film that so many movies of all genres aimed at Millennials feature fabulously wealthy trust-fund type kids or famous-for-being-famous instagram and Vine star folks.  It's f'ing weird.
Posted by The League at 1/08/2018 12:32:00 AM