Of course, in the 2002 Olympics included a huge scandal when someone finally noticed the scores were rigged, leading to the implementation of a whole new system for scoring, and - wackily enough - a more objective system didn't ruin skating and made the medals mean something.

I am sure you'll see some columns this week complaining that the Americans didn't fair particularly well at these Olympics, their medal count roughly fifth place or so last I checked.  The Norwegians destroyed everyone else in medal count, which kinda happens when your country is snowed in for all but two months per years and kids are handed skis as toddlers.

When it comes to things evening up a bit... I don't know how secretive any nation is these days about their training programs, and it sure seems like people from all over train together.  So there's potentially a lot more parity in what people can do to train for all of these games.  It's when they have to pick a homeland to represent that they part ways and claim a particular nationhood, and every country has different rules for who they'll claim as one of their own.  Further, it's no longer the a proxy war for the Cold War with our athletes versus those of the Evil Empire.

Also - I don't care if the US is on top.  If the Olympics are about fair, international sporting and the purity of competition and sportsmanship - may the best twizzle win.  If it is fair, then the US shouldn't have all the medals.  If our athletes choke, we don't get a medal just for finding Pyeongchang.

We did great, btw.  Bronze in team skate.  A few gold medals in Snowboard.  Gold in some downhill.  Our hockey team (women's) won the gold and beat the seemingly invulnerable Canadians.  Some Silver and Bronze across a bunch of sports, including the Shib Sibs on skates.

You know who also didn't choke?  Korean speed skaters.  That team kicked ass.  Also - the S. Korean Skeleton guy seemed like he had rockets tied to him.

Speaking of Koreans doing great, Pyeongchang and South Korea seemingly couldn't have done a finer job of hosting.  I am sure we'll hear some goofy stories later, but unlike Sochi and some other recent hosts, there weren't questions the week before whether the venues were ready and whether this was bankrupting the local economy.


As always, there were some great stories at this Olympics, from a snowboarder winning a skiing competition and snowboarding to the more expected narrative arc of ice dancers Virtue and Moir winning a gold after looking like maybe they were hanging it up.

And if anyone deserves a medal, its been me for keeping my mouth shut about Tessa Virtue for two weeks.

That said - it was kind of funny - the sports that are huge in America and Europe just didn't get the same draw in Korea as Asians, apparently, don't care about ski jumping, so the stands were empty at sports that were packed in Turin and Sochi.  But it looked SRO at Speed Skating and some other events.

And, yes, we did wind up watching a ton of ice skating.

If I have complaints, it's mostly in what's left over from prior Olympics.  NBC brought back Katie Couric to cover the Opening Ceremonies, which she Katie Couric'd her way across, over explaining and just making sure her voice was smothering every spare second of the broadcast.  Honestly, it kind of made the whole thing awful.

America was struck by amnesia, talking about how much Tara Lipinski and Johnny Weir talked over figure skating, but they'd clearly forgotten how Scott Hamilton and Andrea Joyce would Katie Couric over every moment of figure skating, pulling details from athletes' bios and making up narratives, gasping over every jump without any real commentary except to tut-tut skaters at length.  It wasn't fun.  Weir and Lipinski are very polished, and tend to stick to the basics, like technique and point valuation, but they know they can shut up and it's okay.  Hamilton actually was the best I've ever seen him on the NBCSN coverage just talking about ice skating/ dancing with Tanith White, so here's hoping he can keep doing more of that.

NBC used to create these very long packages about athletes that they ran instead of the actual competitions not featuring Americans, spotlighting the entire life story of an athlete.  They specialized in tragedy that would have befallen an athelete, an injury or death in the family.  But you could more or less guarantee that if you had spent the past ten minutes learning about Athlete X, Athlete X was absolutely going to screw up, fall down or get a cramp and not be a factor in that competition.

If they weren't doing that, they were waiting for athletes to finish competition, shoving a mic in their face and asking them about dead relatives.  It was really weird and messed up.  I get they wanted a narrative, but it was always super gross.

Well, they kept all that to a minimum this year.

I strongly suspect NBC is monitoring social media feedback as only once did they did return to form, asking a skier about her father who had recently passed, essentially hurling sand and rocks across her moment of victory.  I know I tweeted them, and I imagine a lot of other people did, too, and I saw mention of it online elsewhere.  Meanwhile, at the skating rink, ol' Andrea Joyce can't help herself, and was still asking annoying if less depressing questions.

At least NBC finally quit running those packages and just showed the sports.

The "scandal" of Adam Rippon having to repeatedly say "I don't want to talk about Mike Pence" became a headline, which seems cheap as hell.  Rippon wasn't making the Olympics about his sexuality, but everyone else brought it up, so of course he talked about it.  And then, of course, any article on the topic of the Olympics had a comment section with insecure people insisting Rippon not rub his sexuality in their face.

Sigh.  We're so bad at this, Planet Earth.

But this guy wants us to do better. 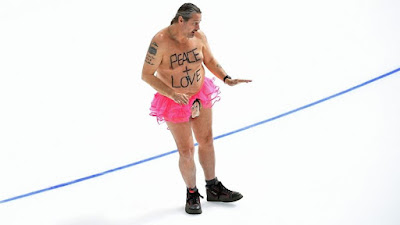 But it's been a fun couple of weeks.  Sure, I'd burn out trying to watch all this stuff all the time.  Snowboarding is still, at best, a novelty to me, and after a while all the bobsledding looks the same.  But for a few weeks every four years, I still enjoy it.  I may have my head around Summer Games a whole lot more, and sincerely look forward to track and field, but give me a good round of speed skating or bobsled any day to give me a shot of vicarious adrenaline.

And, of course, Tessa Virtue. 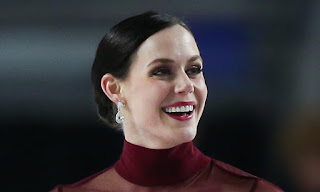 *  I just worry about the young skaters, because holy god - every time the athletes are under a certain age, all those cynical and dark thoughts you have about what their lives must look like barely scratch the surface.  I am increasingly of the opinion no athlete should be allowed to participate in the Olympics until they're 19.
Posted by The League at 2/25/2018 11:51:00 PM