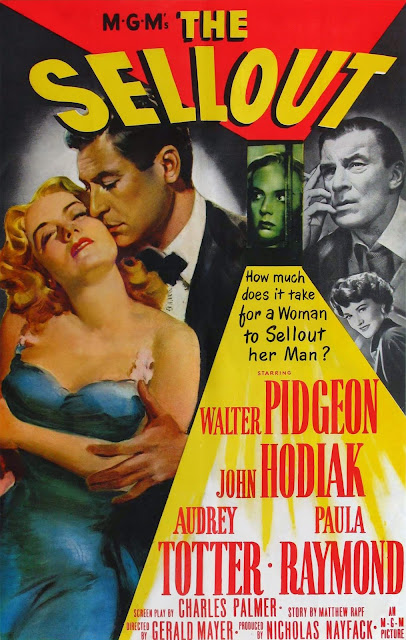 This poster is a particularly odd advertisement for The Sellout (1952).  For all the relevance to the plot, it'd be a bit like putting "will R2D2 reunite with C3PO?" on the poster for Star Wars.   And it's particularly odd, because the story of The Sellout isn't not just focused on whether Audrey Totter will sell out "her man" (he isn't "her man", anyway) - it's a fascinating take on the cancer of political corruption, and the role of a free press (and what happens when that gets hobbled).

Bucking the usual structure, our lead, John Hodiak, isn't introduced until a full 1/3rd of the way into the movie.  Instead, we start with the editor of a mid-sized city newspaper (Walter Pidgeon as Walter Pidgeon) heading out to the 'burbs beyond the city limits to go see his daughter, her husband (a young Cameron Mitchell!  It's super weird!) and their child.  Heading back out, he runs modestly afoul of local law enforcement who shake him down, as well as one of his employees he's driving back to the city.

Pidgeon doesn't identify himself, and so he's witness to the many corruptions of local law enforcement before someone external does identify him, and he's promptly released and begins a string of stories meant to rally locals into voting a corrupt sheriff out of office.  But, suddenly Pidgeon disappears, as do the stories, just as state officials are heading in to check out the situation (Hodiak).   Hodiak arrives to find all the witnesses who'd talked to Pidgeon are now clamming up.  And a very pretty girl in the hotel bar (Totter) tries to make his acquaintance.

This movie was shown as part of Totter's spotlight day on TCM's Summer Under the Stars.  Unfortunately, despite the fact she's quite good in the film, someone coded as possibly a hooker, she doesn't get a lot of screentime as her part (despite what the poster suggests) is supporting, giving Hodiak a woman to protect as the lawyer learning the law isn't just a career climbing  mechanism, it's also about JUSTICE.

The story works surprisingly well, coveying how political corruption manages to survive - especially when that corruption punches down and doesn't impact the folks with their neatly trimmed lawns and can be spun as protecting the good voters.  It's a genuinely strong and perpetually timely reminder of the values we like to think America runs on, but how those values get subverted if our duly elected officials are the ones enforcing the law and the press is cowed (not that those ideas have any relevancy to the events our amazing modern age).

I've gone ahead and tagged the film as "noir", although I don't think it quite qualifies.  I'm willing to hear arguments, but I'd suggest that this is about a guy finding his moral compass along the way, not losing it because of a dame.  Overcoming political corruption and the odds and saluting The American Way doesn't really fit into the same wheelhouse as Double Indemnity.  But it is a murky underworld just this side of a the comfortable 'burbs in 1952 - and that may get it some bonus points.

Spoilers: the titular "The Sellout" of the the film is, btw, Cameron Mitchell, I guess.  It's a nice twist, as the film does hinge on not quite knowing what's happening til the big reveal at the 11th hour.  But for a big part of the movie, I kept thinking "did they just throw that name on this movie and not care that it didn't fit?"
Posted by The League at 8/10/2018 12:25:00 AM