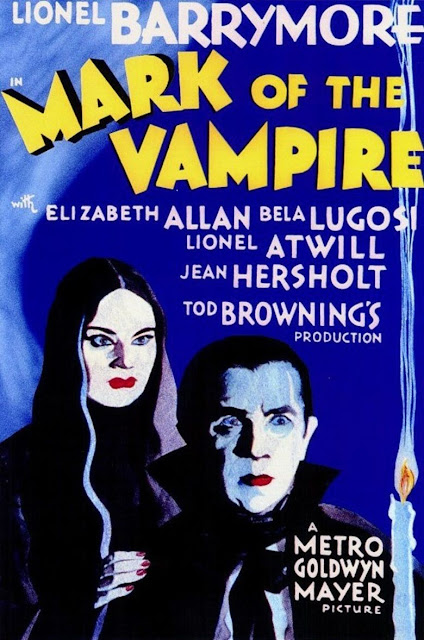 1931's Dracula was directed by Tod Browning and starred Bela Lugosi as a vampire who tries to transform a lovely socialite into a fellow member of the Undead club.  If you've not seen it - for shame.  You should fix that.  In 1935's Mark of the Vampire, Tod Browning directs Bela Lugosi who is playing a vampire attempting to transform a lovely socialite into a vampire.

Yes.  I, too, was surprised by this lack of a turn of events.

Until recently I wasn't too clued into the biography of Bela Lugosi.  I knew he'd come over from Romania at some point, got cast as Dracula in stage shows and that transferred over to Hollywood, and something failed to click with Lugosi and stardom, and he spiraled out into drug abuse and increasingly worse movies.  For an excellent overview, I highly recommend Karina Longworth's longform podcast You Must Remember This in general, but especially her coverage of Bela and Boris Karloff from 2017.  She does cover the Dracula period and more in entertaining detail.

I've already forgotten what sort of deal he had with Universal, but it clearly wasn't exclusive as he popped around from studio to studio making mostly horror films of a wide range of quality.

Further, I'd always wondered what the story was with Mark of the Vampire (1935).  It's a movie you see stills from, but I'd never heard anybody really talk about it or rave about it, and as the movie unfolded, I think I was more curious as to what they were thinking when they made the movie than I was about the story or film itself.

The movie is not a Universal picture - which I suspected had kept it from the usual Universal Monsters canon that Universal still exploits to this day.  It was made at MGM, an odd fit for a horror film.

If you walk into the movie knowing more or less nothing, as did I, but have watched Dracula a dozen times (as have I), the first 4/5ths of the movies is a very strange viewing experience.  For much of the film's runtime, you're wondering just what everyone was thinking other than that, possibly, Browning just wanted to remake Dracula with a better budget and more control, occasionally hewing closer to the novel of Dracula (though not appreciably so), and veering off quite a bit in other directions.

But the film was made slightly later in the talkies cycle, and the vast technical improvements in sound and staging are evident by this movie.  The sets looks right, there are supposedly spooky mammals running around (an opossum?  Why is the goofiest backyard pal of all showing up in this thing?) and lots of fake spiders and bats that more indicate mood than sell it.

The acting is probably technically "better" than Browning's 1931 outing, and the female lead far less dull.  We have some familiar faces from the era, including Donald Meek and Lionel Atwill.  Lugosi himself has almost *no* dialog, which I need to look into.  That's... strange.  He's spooky as Not-Dracula - maybe more spooky than in the original film, but never utters a word til the end.  But the casting of Lionel Barrymore as a Van Helsing-type come to look into the vampire puzzle is like dropping a tornado into Dracula.  The man just fills every scene he's in - and his tone seems somewhat off from the spooky proceedings.

That is, until the weird-o last 1/5th of the movie.  Where you learn that the vampires are stage actors and this is all an elaborate ruse to get one of the party hunting our Dracula stand in back into the house where he may have murdered the father of our debutante where Lionel Barrymore will hypnotize the sap into re-enacting the crime.

Why vampires?  Who knows.  It all has a feel like a weaker Silver Age DC Comic when the Comics Code wouldn't allow for vampires, so inevitably Jimmy Olsen would learn that those ghouls chasing him were really just a mod band trying to get his autograph or whatever.

At the time, I'm sure it all felt very clever, and it is as big a twist as I can remember in any movie, I guess.  It just doesn't really work or make much sense in the amount of effort put in versus what they accomplished.  And, it leaves a perfectly serviceable vampire movie abandoned partway through.  The sorts of things one would choose to analyze  - there are curious bi-curious overtones to the stalking of the vampires, the history of the vampires was apparently cut because it didn't matter, but that in itself leaves some open questions...  - all of that just evaporates into a puff of smoke.

I mean, I laughed at Lugosi's final turn as a hammy actor who was relishing his role as a vampire (it's supposed to be funny and self-referential), but it's the only win.

And despite a few online reviews I read that were really going to the mat for this movie, I suspect that twist is why it hasn't quite endured or made it into the rotation of Halloween favorites.

Maybe on a second viewing I could appreciate it more, but the movie really painted itself into a corner insisting it was one thing and then changing directions in ways that defied logic when a mundane world is what they're suddenly insisting upon.

All in all, the visuals alone make the movie worth checking out.  I do think Lugosi would have been good in this movie if they'd not cut all of his lines - he's pretty spooky here.  And Caroll Borland seems franchise ready for her own creepy films and probably did more to inspire Morticia Addams and the like than any of Dracula's daughters combined.