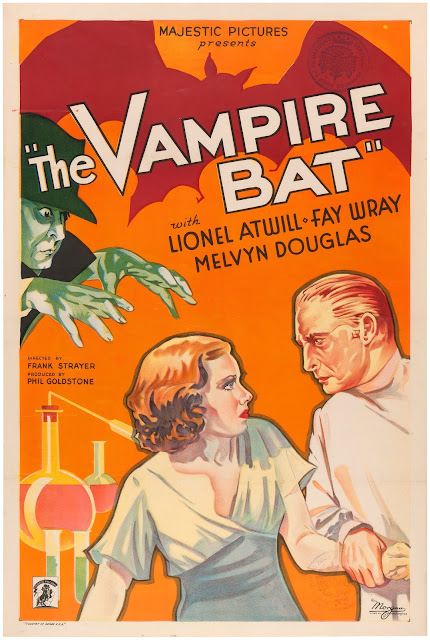 
I know.  I know.  Two vampire movies in a row.  But for "why is there a theme here?", just wait til I start binging my way through all the Audrey Totter films in my queue.  I made mention in my Mark of the Vampire write up of Lionel Atwill showing up - and apparently these two films aired back-to-back as part of Summer Under the Stars - so this is more exciting 1930's vampire action starring (you guessed it) Lionel Atwill who was featured last week.

The Vampire Bat (1933) is a post-Dracula cheaply made independent horror film that relies not just on the good will of Dracula and what it placed into the popular imagination, but literally depends on movie fans to be familiar with the Universal horror properties to work as a story.

Not only did Majestic Pictures ride on Universal's horror wave, they borrowed the sets from The Old Dark House and Frankenstein (both James Whale pictures) PLUS actor Dwight Frye, who played Renfield in Dracula as well as Dr. Frankenstein's sidekicks in the first two Frankenstein pictures (only the first of which was produced at this time).   The studio might have known Fay Wray would explode into stardom with King Kong this same year, but here she's relegated to looking longingly and lovingly at her love interest, the town lawman.

The basic set up is:  people in a small German town are dying, their lives ended by something poking two holes in their neck and draining them of bloooood.  Simultaneously, a whole lotta bats seem to have clustered around the town.  According to local lore, three hundred years prior when the bats showed up, vampires were murdering people until the townsfolks slew the bloodsuckers.

Of course, this is the 20th Century and we don't believe that hogswallop (sp?).

While bodies pile up, our youthful (but dorky) lead is frustrated that he can't crack the case, a Burgermeister really wants to kill vampires.  Meanwhile a kindly uncle/ doctor (Atwill) has an ingenue niece (a lovely Fay Wray - the only kind) living with him.  The Niece is in a super-chaste relationship with the local lawman.  The niece also has an Aunt Gussie (literally) who's comedic relief as a hypochondriac.  And, of course, Dwight Frye plays a local eccentric (honestly, in 2018 terms, he's on the spectrum) who likes the bats and was friends with an elderly lady who was a victim.

The townspeople get all whooped up and ready to start mobbing on someone or something - if only they could sort out what is happening.  Of course, Frye's "Herman" isn't making a great case for himself by telling everyone how lovable bats are - soft like cats!

The movie absolutely depends on the audience thinking there will be a vampire, but instead reveals that the uncle/ doctor is using telepathic mind control (I know!) to get his manservant, Emil, to capture people, and take them to his lab where he uses two needles and a lot of tubing to drain them of blood so something-something-secret-of-life.  The movie manages to refute the supernatural, employ some mad science, and still have an aura of mystery and horror.   And, of course, some good ol' fashioned mobbery.

Neither mind-control nor the swarm of bats are given a rational explanation, but that's amateur hour for failing to explain yourself in comparison to Mark of the Vampire.

It is sort of amazing how *good* this movie looks on the budget it must have had, mostly in part to the borrowed sets and some solid camera work.  The casting of decent actors like Atwill and Fay Wray can carry you pretty far, and a little Dwight Frye goes a long way in a movie.

While I was disappointed this was 0 for 2 for actual vampires in my supposed vampire movies, and while Mark of the Vampire was a better production in most ways, this had the feel of the satisfying short story.

It is interesting that Dracula and Frankenstein both lacked in comedic characters, but already in 1933 we see the trend beginning with Aunt Gussie who is having the time of her life camping it up.  I mean, I'll always be an Una O'Connor man, but she nails what the character is supposed to be and do - even if it diminishes the scare quotient of the movie by half.