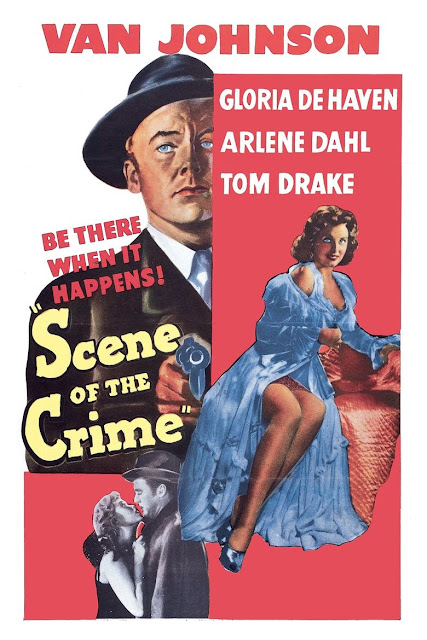 Eddie Muller stated that this MGM produced cop-drama wasn't much in the way of what we think of "noir" in films like Double Indemnity.  But I suspect he selected the film in no small part because the casting of the film is so weird and good.

As he pointed out, Gloria de Haven as a sexpot gun moll/ burlesque dancer is against type, especially when you've got Arlene Dahl in the same movie - here playing the cop's ex-model wife (that's her in the blue above, the poster totally mis-selling how this movie goes down.

The former partner of tough guy homicide cop Mike Conovan (a, frankly, miscast Van Johnson) is shot dead in front of witnesses.  It looks bad -  he's got $1000 in cash in his pocket, and someone is knocking over bookies.  No sooner are they back at HQ when the muckraking press gets interested and Mike is assigned a rookie to train up (Tom Drake), in addition to his current partner, Piper (an extremely well cast John McIntire, who looks at least ten years older than he was at the release of this movie).

With the POV rookie character tagging along, we hear the how's of homicide and police work, including dealing with stool pigeons, etc...

Speaking of which...  the movie may be worth it just for Norman Lloyd as "Sleeper", a smalltime hood and informer.  Just a great, weird and wild performance in the middle of a movie that's in need of some juice.  Yuk-yuk.

What's interesting is that Arlene Dahl, as the wife, actually has a pretty serious story-arc that presages what we'd see in much later films.  She's given up her life to marry this cop, but four years on, she's tired of the late night calls to rush out the door, not sure if he'll come back, and having no life of her own.  In a post-war movie, it's sort of a rarity to see the wife chafing at her role or "duties", and for the man to not just pat her on the head but realize "oh, hell, my ex-model wife is about to scoot".

I mean, he's coming home and telling her he's got to ditch her again tonight so he can take a good-looking dame out on the town so she'll maybe help him on the case.  And, speaking of which, I really dug what Gloria de Haven did with Lili, the "helpless" burlesque dancer.  (spoilers: her heel turn and unrepentant selling out of Mike is pretty stellar).

To cap it off, there's a surprisingly lengthy and violent shoot out at the film's climax, showing this was not one of the Poverty Row studios, but mighty MGM behind the picture.

The mystery itself is twisty and turny, and I tip my hat to the screen-writers.  There's a lot going on here, and had this script not gotten the treatment it did where they seemingly knocked off the edges - it would probably be far better remembered.  But even as it is, going back and looking at what actually occurs and why in the movie is some pretty great crime drama, mixed with personal melodrama.

It's unlikely I'd work hard to watch this film again soon, but it's an interesting curiosity.  And it does have that role played by Norman Lloyd someone should be borrowing from.