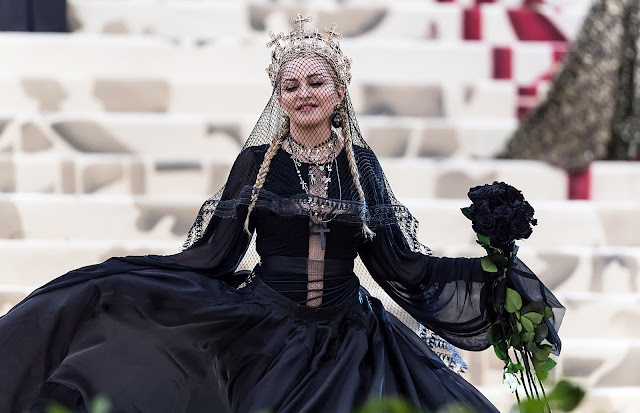 editor's note:  I thought I lost this post, but found an open tab with a draft still available I was able to copy and add to.  This isn't the original post that went out, but I - for the first time in years - accidentally erased that post when I clicked the wrong button.

Apparently yesterday was the 60th Birthday of Madonna.

Here at The Signal Watch, we salute Madonna as the person who told us it is 100% okay to like pop music.  You will not lose your edge by enjoying Madonna.


If I have to introduce you to Madonna, you're either older than my grandparents or one of those dumb kids who thinks all music started in 2015.

To give everyone an idea of the impact Madonna had right out of the box, I still remember the first time I saw her (not heard her).  In the early part of the academic year of 1984-85, we were living in an apartment while construction finished on our house, and every morning was a rush to get driven over to the neighborhood where we would live versus where we did live.  But we *always* had music playing or MTV on the television, and that morning, probably early September of 1984, I was crossing the living room and stopped dead in my tracks to watch Madonna dance awkwardly around a fairly featureless set.  So, like "where were you when X happened?" gets asked and I know where I was the first time I saw Madonna.


For a kid starting 4th grade who wasn't at all sure how we were supposed to be thinking about girls as we're not yet even 10 years old, we sorta stared, didn't say much and then went on with our day.

I'll never say "Lucky Star" is anywhere near Madonna's best song, and, yeah, her dancing in that video is super terrible.  It's really when she's in close-up that you see "ah, there's Madonna".  She's already got her first look down, and - more importantly - she knows how to work the camera.  trying to downplay Madonna's overt sexiness (some contrived, some not) would be a bit disingenuous as she's traded on that one way or another her whole career.

Had it been just "Lucky Star", that would have been one thing, but she had a few singles pretty much immediately and then popped up in movies and whatnot.  Hats off to whomever was Madonna's agent at the time.

Even then I considered myself a "rock" kid, and so I wasn't going to fall into the trap of a bubble gum pop, fly-by-night, one hit wonder like Madonna.  Give me some Van Halen or whatever I thought got me street cred at age 9.

But there she was and she never, ever went away.  I'm calling that a feature, not a bug.

By middle school, you couldn't avoid Madonna, and I remember wondering if one of my classmates was going to get dragged into the principal's office just for wearing a Madonna t-shirt based on the word "Virgin" appearing on the shirt and the fact that Madonna looked like maybe she was sorta in skivvies (that was a lot for middle school officials in Texas).


She quickly became unavoidable grocery store tabloid fodder, marrying Sean Penn and being one half of what, frankly, sounded like an abusive relationship.*  If anything good came of that whole thing, she did put out what I thought was a solid single in "Live To Tell".

But, honestly, my memory of that mid-to-late 80's Madonna has no chronological basis.  There were singles arriving on what seemed like a bi-monthly basis.  Some of them I liked, others were "Cherish".

But as I was discovering "college rock" and whatnot, I was not going to fly the Madonna flag.  Somehow admitting to enjoying a pop star seemed off-brand. That said, this was an era before the internet, music purchases limited by your allowance, and so - just by osmosis of MTV and the radio, you knew all the words to "La Isla Bonita" and especially "Papa Don't Preach" - whether you wanted to or not.

There was that time when she had the huge media push for Like a Prayer, put out a kind of a pop tune full of clumsily mixed-metaphors, and then released an incongruous video that upset a lot of people who were not okay with film-student level messaging about race and the justice system (luckily in 2018, we do not have this issue) and felt the need to clutch pearls over Madonna's décolletage.  I literally could lose all day unpacking what a mess the video was and is, and if it's been a while, click that link and behold.  But the hilarious part was that she'd taken a Pepsi sponsorship in the lead up to the video's release, and they basically had to give her all the money and then distance themselves.

In a lot of ways, Madonna taught us all a lot about real and fake controversy, media maelstroms, and how to skate out of anything when you do not give a @#$%.  And I appreciated that her videos were an attempt to do *something* cinematic in an era when a lot of videos were nothing to look at - just stuff happening on a stage while the performers lip synched.

Of course we hit '89 and I threw all of my reservations out the window.  All it took was a David Fincher directed video aping Metropolis and Madonna to, uh...  you guys have seen the video (starting at about 1:25...  and picking up with a vengeance at 3:13) for me to say "oh, screw it.  If you don't like this, we're going to agree to disagree."


Sure, when I saw Metropolis later the next year, I was a bit dumb-founded that no one at MTV felt like they should mention that this very popular video was referencing a movie we all might enjoy - but that was the joy of discovery in the pre-internet age.

For those of us skirting the edge with Madonna, she was a complicated performer.  She'd do something like "Express Yourself" that would make you say "we should all love Madonna forever!", and then you'd see Dick Tracy and feel like "maybe less Madonna."

I would love to see Madonna in concert, but never have.  Back in the "Blonde Ambition" days, a friend taped her HBO special for me (this was the cone-bra tour) and I watched it a couple of times.  I was less fond of the documentary (Truth or Dare) released that same year following the tour, which I saw at a late night screening at the local dollar theater.  Honestly, not sure she came though it looking as smart as she thought she did.

Simultaneously, I remember "Vogue" hitting while I was a high school drama kid, and being keenly aware of Madonna as gay icon.  That was not a small thing back in the early 90's, just so you kids understand.  Openly embracing the LGBQT Community then was unusual to say the least - and I like to think Madonna opened the door a bit for people to reconsider their prejudices.  So, when a kid at my drama camp from a rinky-dink town in Texas came out to 70-odd drama kids by dancing shirtless to "Vogue", that song earned a place in my heart.

Man, I hope that kid was okay when he went home.

She put out the Sex book that we checked out at the Houston Library when one of us turned 18 and suffered the withering glances of the the HPL circulation librarian (it's super dumb, you guys).  And there were a few other stunts and the awkward "Justify my Love" experiment, which actually was an okay song.

All of the goofier and dicier parts of her career presaged the move to England and Madonna becoming sort of a punchline of "oh god, what now, Madonna?" that would dog her in the post "Ray of Light" days (and I think "Ray of Light" is great, btw).

If I say "oh, Madonna made it okay for me to like pop music" - I'm really pretty unfamiliar with a lot of pop music from the 90's.  You guys, I was too edgy and dangerous for pop music in my youth.  But in the early 90's, Madonna put out The Immaculate Collection.  It turned out to be two volume album of her greatest hits.  And, if it's not in your collection, you are doing things wrong.

It's a hell of a lineup on both Volumes, especially that first one.  Same as we all enjoy pop tunes from prior eras - some hits have staying power, some don't.  Madonna's, somehow, seem to be able to shake off whatever marks them of their era and just be part of our collective songbook.  We should all just enjoy Borderline and especially Open Your Heart guilt-free.

We put a lot of stock in our musical preferences and we like to act like what's in our record collection is an outward manifestation of who we are - and it is.  I hope you've got some decent pop tucked alongside your Buzzcocks and Napalm Death records.  You don't get an award, as it turns out, for being most-edgy.  Plus, who doesn't want to shoulder-dance while driving to "True Blue"?

Heck, I still listen to that collection, and I'm not too quick to join in the horrendous piling-on people want to do for Madonna.  BTW - here's what came up as search facets when I Googled Madonna 2018.

But, seriously, Madonna's had an outstanding career, a few roadbumps aside.  She looks phenomenal - which shouldn't matter, but, I mean.. - and jesus, I find the fact that Madonna's weight is even a question to be a bit maddening.  Further - why does anyone think Madonna is dead?  Now - a tour I'd like to know about, too.

A few years back she did the Super Bowl halftime show, and it was a reminder - after some pretty lackluster hafltime shows (Prince aside) what a superstar looks like.  That's how you remind everyone you're @#$%ing MADONNA.

But as I age and the icons of my youth age, Madonna has done pretty damn well for herself, which isn't bad when you consider how bad the dancing is in "Lucky Star".  More starlets than I care to name have tried to follow her path to success, some better than others, and some with their own angle, still dovetailing with much of what made Madonna Madonna (see Lady Gaga's near unconscious following of her path).

Sure, she's some stuff none of us got or liked.

*I recall some of the stories from the time, and it sounds like Madonna did well to get out intact.  I have no barometer for how true any of those stories were or are
Posted by The League at 8/17/2018 10:50:00 AM