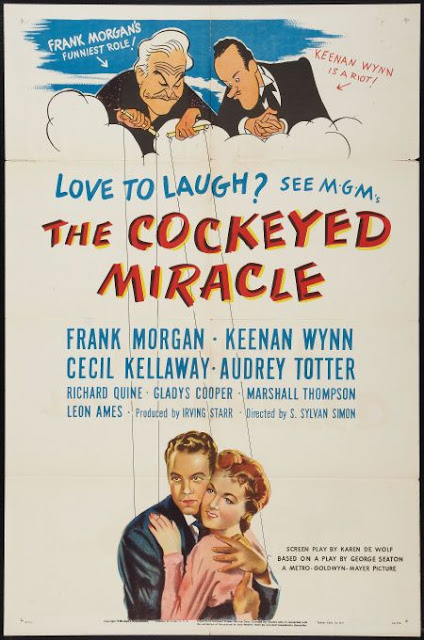 
Apparently The Cockeyed Miracle (1946) didn't do very well when it came out after WWII.  Honestly, it feels a bit like a pre-war film, set in a New England ship-builder's house in the early 20th Century - like an adaptation of a toothless Broadway show that never was that plays by the codified roles of men and women you see more in musicals than you do in even comedies.

The cast includes a lot of familiar faces.  Frank "The Wizard of Oz" Morgan plays the family patriarch who has taken all of the family's money out of the bank for an investment that should pay off and take care of everyone - something he needs as he's got a heart condition and is ailing.  Gladys "My Fair Lady" Cooper plays the family's angelic matriarch.  Leon "Oh, damn, he was in everything" Ames plays the well-to-do, arrogant brother to Gladys Cooper.  And Audrey Totter plays the daughter of Frank Morgan and Gladys Cooper - a librarian in love with the boarder - a promising professor/ geologist (who's a complete nincompoop).  Her brother has also just been told to come to England to land his dream job working for a master ship builder.

There's a lot of necessary set-up in the first act as the big turn to the second act is Frank Morgan's ship-builder dying and coming back as a ghost.  He's greeted by his own father - Keenan Wynn - who is ready to take him to the afterlife, but Morgan has left his family in a financial pickle.  Plus he needs to make sure his daughter gets married, his son goes to England, etc...

I'm fine with stuff that's a slice of made up Main Street USA Americana that never existed.  I mean, if the world ever resembled the psychotic culture of River City in The Music Man, we'd all go insane.  But anytime you see a movie with women in Victorian collars and hair piled on their heads - kids - you can more or less guess people are going to say things about love and romance that sound as if they've never actually met two human beings.  Let's just say that The Cockeyed Miracle finds the line between innocent romance and two people who really need to meet a lot more people (I flatly refuse to believe this clueless boob was the only option in town for Audrey Totter), runs across that line and refuses to stop.

It's not Totter's fault - the role is pretty much boilerplate ingenue stuff, and she even gets to play "alluring" when she's caught in a rainstorm and has to change out of her dress for a bit while it dries. 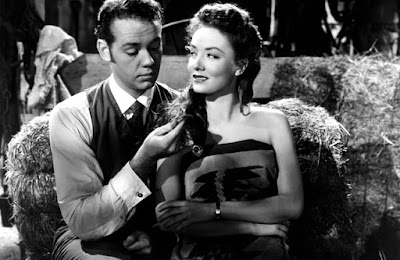 The big gag of the movie is that Morgan is now (a) a ghost who can (b) walk through walls being (c) shown the ropes by his own deceased father (Keenan Wynn) who (d) is younger than him because he died at 38 and (e) knows he had a bad temper in life and is trying to do better.

All of this leads to - I hate to say it - an endless repetition of the rules and whatnot they're playing with as ghosts.  I mean - endless repetition.  There's absolutely no trust in the audience to get "hey, we're ghosts, so, no one can see us".

And the last bit of the movie just... instead of being funny, just grates.  There were probably ten or eleven more satisfying endings possible, and the movie went with one entirely designed to give Gladys Cooper a speech about how she doesn't need money because she loved her husband.  And it's all very plucky, but... doesn't make any sense.

I can't really say I loved the movie.  Audrey Totter is lovely and does what she can as she stomps her feet and bugs her eyes at the thick-headed scientist who loves rocks more than the willing and available girl living in the same house as him.  I mean - that's the role.  Thank God noir directors found her and knew what she could do.

And while these sorts of polite 1900-era movies were far from dying out, it's not entirely surprising that their heyday outside of the musical wasn't destined to last.
Posted by The League at 8/16/2018 12:58:00 AM