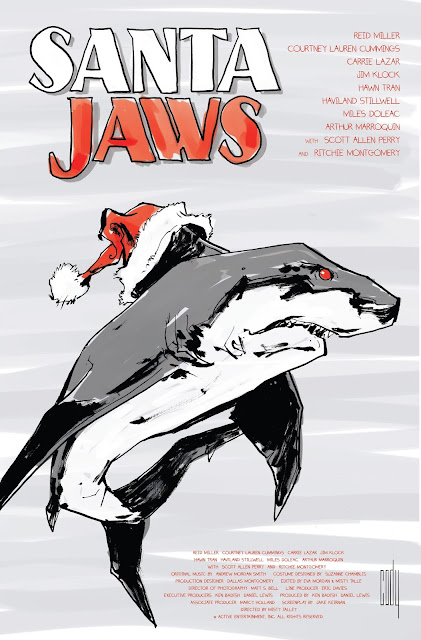 You know, every once in a while it feels like the universe says "hey, let's do Ryan a solid and just make something exactly the way he'd like it."


If my basic cable watching habits of bygone days were tracked, and they had sat back and listened to me and JAL pitching ideas back and forth in film school, it's entirely possible Santa Jaws (2018) would have been the exact result of that formula.

I've made no bones around here about my deep appreciation of the cheesy made-for-cable holiday films that will start in about two months and run for more than 1/6th of the year (now including July where Hallmark went ahead and ran Christmas movies the entire month, we're up to a full 1/4 of the year).   And in days-gone-by when SyFy had a different, Asylum friendlier format, I watched plenty of mutant and giant shark movies.  Heck, I've seen all of the Sharknado movies the day they aired. 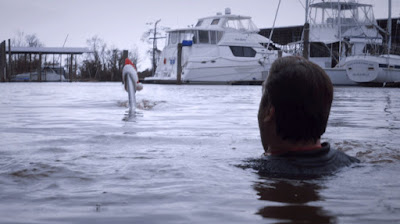 Add in a wish-fulfillment plotline about kids who want to draw comics, and you've got Santa Jaws, a movie that - and I am not just saying this - I think has a genuine shot at becoming some sort of holiday perennial for SyFy.  Which, yeah, I mean they aired in in August the first time, but they weren't moving Sharknado Week to Christmas.  Now that just wouldn't make sense.

I'm not even being snarky - Santa Jaws isn't the usual "so bad it's good".  It's a movie that is absolutely straight-facing a movie about a magical shark swimming around with a Santa hat on her dorsal fin, who is attracted to all things Christmas, be it a holiday tune or egg nog.  This could have been a "ha ha, okay, we got the joke in the first five minutes" sort of things - but, no, indeed.  Literally to the finale, they keep finding new ways to look through the prism of Shark + Holiday Movie.  It's kinda magical.

Honestly, it would not be very Christmassy to spoil this movie for you.  Or sharky.

What I will say is - I know a lot of you feel uncomfortable snickering at movies and stuff like RiffTrax makes you uncomfortable,* but this is the opposite of that experience.  This is a movie that did the cleverest stuff possible, understood holiday AND shark movies incredibly well, put them in a blender and came up with the best of all possible outcomes.

I was honestly having a bit of trouble livetweeting this gem because the movie kept making my jokes one step ahead of me. This was way more entertaining than I expected and kudos to everyone involved for giving it their all.