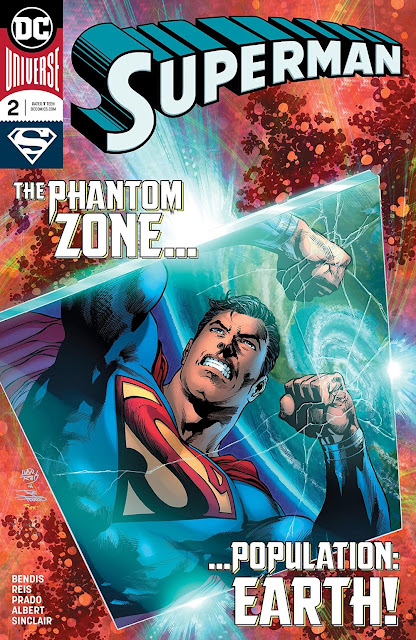 
I love that DC has a stable of artists who can work at the level of Reis in a terrific, illustrative style, can pair them with inkers like Prado and get colors like Sinclair.  I mean, those first few pages opening with a Tamaran/ Thanagar conflict is absolutely unreal (and part of why I tune into comics).  Flip to the next pages with Superman in action, and, hoo-boy.  That is some gorgeous stuff.

The comic is printed again on the non-slick, pulpy paper, and I've not been reading enough of the internet to find out "why".  And I don't know anything about the printing process, so I'm still going with the "makes Sinclairs' colors pop" answer, until someone tells me otherwise.

Superman doesn't "have" to be drawn in ways that reverberate for me the same way a good José Luis García-López rendering delivers (I'll write up Cat Staggs on the online Death of Superman comic soon),  but it is fun to have this work on the stands.

As indicated by the title, this issue delves further into "what is happening" with Superman post Man of Steel.  And, of course, end of last issue Superman found that Earth itself had been drawn into The Phantom Zone.  Pretty big, exciting stakes right out of the gate (and here's a moment of appreciation for that full page rendering of Superman pondering Earth from far out inside the Phantom Zone).

Bendis doesn't shy away from the notion that the League leaps into action when something like this occurs, and he acknowledges that both the Earth and Superman could fall apart and fail in this environment, neither exposed to the sun, exactly, and who knows what the physics are inside the Phantom Zone and how they'd impact an entire planet.

We also get some of Rogol Zaar's perspective - his fury at being chucked into the Phantom Zone and the much hyped first comics appearance of Nuclear Man, lifted from Superman IV: The Quest for Peace.  Bit of meta-commentary here from Bendis as Nuclear Man goes unnamed here in the comic, but Rogol Zaar eyes him while pondering how the Phantom Zone is where Kryptonians throw their embarrassments and failures.  I won't ponder much more upon the character, because who knows whether that's it for him, but it's kinda nuts to see Reis' drawing of the guy.

But the surprise to me - It wasn't Rogol Zaar who'd figured out how to draw the Earth in to the Zone.  So...  what else is at play?  (trumpet sting of mystery!)

The Justice League goes mostly unseen, except in telepathic link and with The Flash making an appearance (which reminds me I need to catch up on my Flash comics that have piled up) - but something is impacting them physically as the issue concludes.  And, hey Max, they include Plas in this version of the JL.

Other than a synopsis, it's difficult to say much about the arc of the story and where it's headed, which is actually fun.  I like a meaningful tale working in allegory and learning a life lesson from Big Blue as much as the next reader, but "fun" is not a bad feature for a Superman comic.  I am not sure *I* need the synopsis of what came before this issue, but it's probably not horrible to remind folks of relevant details in a monthly format or to assume they read what came before.  After all, this is a building year for Superman, and I've often theorized part of why Uncanny X-Men did so well during the Claremont era was that the man's writing was the embodiment of "every comic is someone's first comic", or, at least their first on reading that title.  Can't hurt to keep folks up to speed.

It's wild to see Starfire's dad and the Tamaranian army, and we did get a hint that, hey, at one point, Rogol Zaar's face was intact and he hadn't had his nose and lip torn away.  Whether that goes anywhere... we'll see.  But I'm willing to be patient.

I suppose at this point my misgivings about Superman under Bendis are melting away, and, hey, I'm back to driving to the comic shop a couple times per month to pick up the latest.  Prior to this, I was a monthly visitor where I'd collect my pulls (and maybe longer in between during New52).