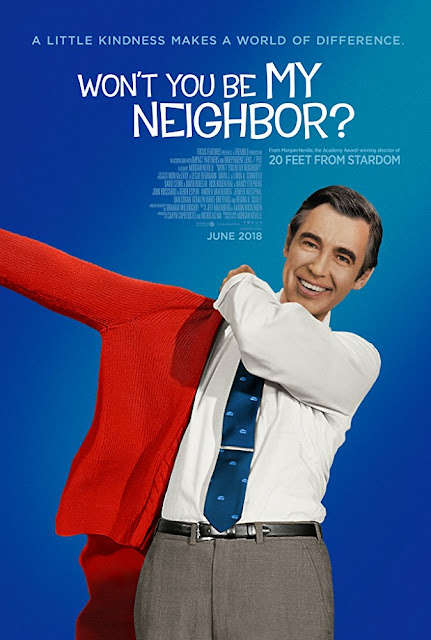 
Even folks 10 years my junior won't have grown up with 3 networks, PBS and a few UHF channels - you'd likely have had cable and therefore options.  Not to mention VCRs and maybe even laser discs.  But in the mid-70's when I graced this plane of existence, there just weren't that many options for children's programming, and so it was that most of Gen X was raised on fairly similar media - or at least within a narrow range.  And most of that - in an era when watching TV was a given - was outsourced to PBS.

Certainly PBS likely had other shows on the air for kids, but Sesame Street and Mr. Roger's Neighborhood were the big two.  Won't You Be My Neighbor (2018) presents a portrait of Fred Rogers, a Presbyterian minister who hung up his collar and a church for the opportunity he felt TV provided to reach out to kids and tell them they mattered and help them feel the world was a good place if you worked to make it that way.

Filled with interviews of colleagues, of family (seeing Fred Rogers' grown, late-middle-aged children is mind-boggling), guests from the show, and more - it's a testament to the genuine character of the man who seemed too kind to be true, who was always working just a little bit parallel to the world the rest of us seemed to inhabit.

Admittedly, this is at least the second Mr. Rogers' Neighborhood-related documentary I've seen this year, and, frankly, I'm glad I had seen the one on PBS that aired during pledge week (enjoy my money, KLRU, I'm enjoying my tote bag) as it filled in historical gaps and talked more about the production of the show, where this doc focuses on Fred Rogers, the man - and may leave some gaps, historically, in its laser-focus on unpacking this omnipresent person who wasn't a celebrity, exactly, and therefore - no matter how many interviews he did - always seemed to leave adults with more questions than answers.

Fortunately, the doc goes ahead and addresses some of those urban myths (spoiler: they're bunk), and some of the spoofs of Mr. Rogers - at least Eddie Murphy's SNL skit holds up.

If I took exception to anything - it's that the value of Mr. Rogers' Neighborhood is placed at odds with pretty much all other childrens programming, rolling clips of familiar kiddie faire from across the decades as regrettable trash in comparison - which, look, we all grew up on both, and it almost shakes the movie from its foundation if you put too much thought into a compare/ contrast and who remembers more about which shows.  And, yeah, I know this is a Superman-related website, but the doc goes in for some positively 80's thinking, suggesting superheroes are a physical danger to kids  who will try to emulate Superman and fall out a window.  Look - any deaths or injuries is too many, but it felt a bit tone deaf in the era of every kid carrying a Captain America backpack.

But the central message of Fred Rogers as a man with an impossible burden, who faced often ridiculous criticism in his lifetime as his simple message of love and kindness is a desirable thing was misconstrued intentionally or otherwise - it does raise the haunting question of what it means to be a good person in a world that reacts with near violence to the notion of unqualified acceptance and love, in the Judeo-Christian sense (and often by those who use their bibles as a cudgel*).

If you missed it on the big screen, as did I, no worries.  Most of the footage is TV footage, anyway.  It may be you'll feel less self-conscious when your eyes get hot and wet in the privacy of your own home.

But aside from that, I leave you to the doc itself.  In this era of constantly traded barbs and cuts to which we've all become thick skinned and cynical - considering kindness as a pursuit in worth time and reflection.