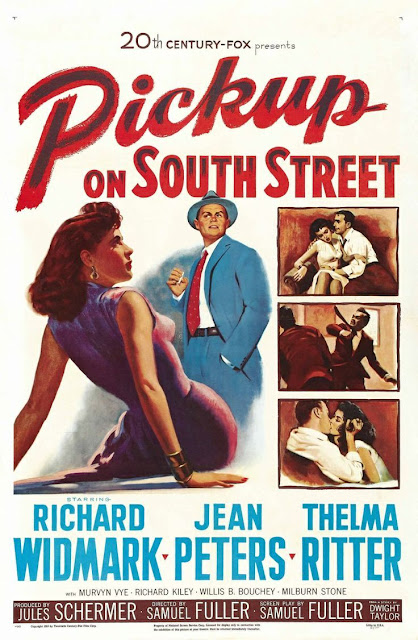 This evening Karina Longworth, host of the much-discussed You Must Remember This podcast, came to Austin for a book signing and screening.  Longworth has a new book available, Seduction: Sex, Lies and Stardom in Howard Hughes's Hollywood, which she's promoting.   If she's coming to your town, stop on by and see her and pick up the book.

For the film selection, Longworth and the Alamo programmed Pickup on South Street (1953), which starred Jean Peters, one of the main figures in Longworth's book.  The film also stars noir star  Richard Widmark and high-quality character actor (and multiple award nominee but never the recipent) Thelma Ritter.


Directed by Samuel Fuller, the movie stays where Widmark's characters usually dwell, in the shadowy underground of hoodlums so far from the respectable world, cops are capricious, hilarious and inevitable forces of nature and a code of conduct and rules apply that has nothing to do with polite society.

Widmark plays a pickpocket you lifts the wallet of (possibly former) call-girl Jean Peters, who is acting as a courier for her former boyfriend - believing he's involved in corporate espionage.  Unfortunately for Peters, he's actually sending stolen microfilm to the "Commies"*  Where Peters remains unaware of how big this is, Widmark is dragged in and gets clued in on what's happening by a G-Man, but rather than support Western Democracy, he decides what he'd like is a big payday from the Russkies.  A stoolie, Thelma Ritter, who identified Widmark gets caught in the middle, but works her advantage, touching everyone for $20 here, $50 there as they seek info.

Fuller isn't one to go in for the preachy classroom politicking of the day - Widmark may be causing headaches for the US Government, but when you're a three-time-loser, its hard to be on the side of law & order.  Where some might go in for speechifying that wins over our morally dubious leads, these characters aren't operating in ways us law-abiding types might, but they have their logic.  And in a shadowy world where you can fall in love with someone overnight, even as they're spinning lies to match your own, it's a wicked little world.

If you don't know Thelma Ritter, you likely remember her breakout role as the tired mom in Miracle on 34th Street who can't believe what a great racket Macy's has thought up, sending people to Gimbles in the spirit of the season.  She also appears in movies like All About Eve, and I'm particularly fond of her part in The Misfits.  After I bought the tickets to see this show, this article appeared on the Criterion blog - and I'll just suggest you read it, because it's all true.

This movie is not without morals, but it is about the different ways the classes of characters think of what is right and wrong and why.  That the angriest clash of the film is not necessarily between capitalist and communist but between a man furious that the cowardice of others in their supposed global scheming led to the injury and worse of people who happened to cross his path and care a bit about him - it's a curious statement to make in the HUAC-happy 1950's.

The movie has it's flaws - the romance between Widmark and Peters feels unmotivated, even if I wanted to start spinning up excuses - they wouldn't hold.  The cops make some bungling errors that suggest incompetence.

But all in all, the movie has some surprising meat on its bones, and even Peters shines pretty brightly in a role that could have caused issues for her thanks to the not-too-subtle suggestions of who and what her character is in an era where they couldn't even use the word "hooker" in a movie.  I've only seen a handful of other Fuller movies, but I appreciate his ability to tell stories about these characters without romanticizing them and with a healthy dose of empathy and appreciation of circumstance and how it shapes a character.

Anyway, thanks to Karina Longworth and the Drafthouse for making it happen.  It was a great evening out.