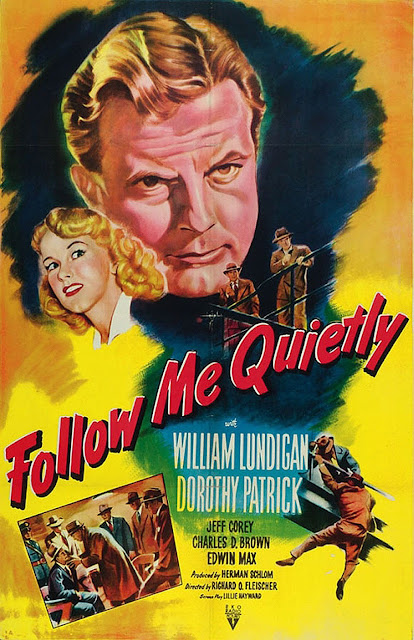 
If you're ever looking for a movie that well exemplifies the original definition of "B Picture", but still want to watch an entertaining police procedural and finish in an hour - Follow Me Quietly (1949) is the noir flick for you.

No real star power, a tight budget, but still telling a fair cop yarn and succeeding mostly in directing and management of the story (credit to Richard Fleischer in an early outing at RKO).

A murderer stalks the streets of Any City, U.S.A. (Los Angeles, I guess), killing when it rains - murdering people for their "sins".  The cops are on the case, looking for the Judge and with no real clue who it could be as there's no real connection between the victims and the Judge seems to have imagined the sins of the victims.

A plucky reporter (Dorothy Patrick) finds the cops on the case and inserts herself into the investigation thanks to the fact that she's very determined and terribly attractive and even our hard-boiled lieutenant is not made of steel.

No one in this movie is a terrific actor - especially our leads, so it's up to quick patter and a faster-moving plot to keep the ball rolling.  But as a police procedural - while there are no major twists (and, believe me, I was waiting for one) - and so it gets down to cops collecting evidence as bodies pile up.

One major component of the movie that frankly doesn't make a ton of sense but they sure liked was that the detectives get someone to make them a dummy based on the physical description of the killer, which they've compiled from various bits of evidence, but have no face.  So we get this: 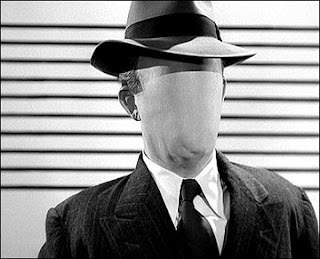 Yeah, I know.  Suddenly it seems Steve Ditko's bizarre creation of The Question's signature look may have had a bit of cinematic inspiration.  Not that you can't just say "well, he drew a guy without a face and liked the results", but...  Yeah. 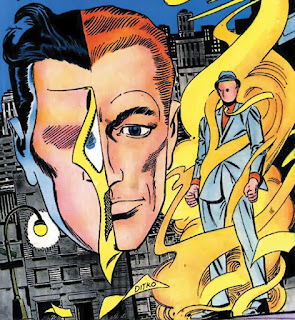 Before I had a chance to see the movie, believe me, people were already tweeting about the resemblance.

The dummy keeps showing up in the film, and in about 1/3rd of the shots, I'm pretty sure that was a real guy in a mask, and I want to know more about this dummy.  Someone get me dummy information!

She's only in the movie for a minute, but I loved Marlo Dwyer's turn as the waitress.  And then realized she was the cute drunk in Sniper, which I'd also just watched.  She doesn't have much of a filmography, but, I realized who she was in Caged and Crossfire.  She was basically playing a lot of good-time-gals and floozies.  Henceforth, I'll be looking out for Marlo Dwyer.