If I'm reading the internet correctly, today marks the 40th Anniversary of the release of The Star Wars Holiday Special. 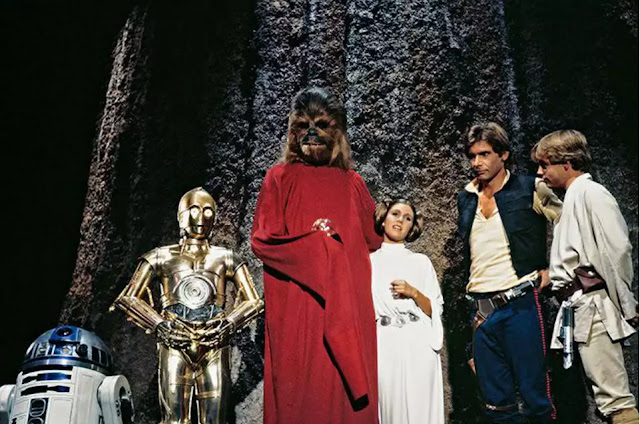 We look back now at the Star Wars Holiday Special as the trainwreck that it, indeed, is.  But I also think it's worth mentioning what a @#$%ing miracle Star Wars itself was when it was released, and that these same actors in the same wardrobe were totally capable of making something absolutely, insanely awful.


I am curious if this show is the only 1970's era variety-style TV the younger generation has ever seen, and so they may be unaware - look, most 1970's-era TV was just incredibly, terrifically bad.  And people loved it that way.  It was completely self-aware of its terribleness, but as long as you went on camera with a good attitude and a smile, you could carry a lackluster bit of programming for years, telling corny jokes, putting sexy dancers on stage, and having a respectable looking band in the orchestra pit or stage left.

Hee-Haw
Mandrell Sisters Show
Donny and Marie Osmond Show
Legends of the Superheroes - no, really, this is a variety show they did with the Justice League

You'd be surprised how many of these shows were on for 2-3 years at a time.  Never very good, but the reality TV of its day as cheap to produce and a good way to fill network time with TV-level celebrity.

I was around when the Star Wars Holiday Special aired, but had no memory of it.  I think the first I heard of it was circa 1999 or so, and I recall Jamie and I rented it from Vulcan Video in 2000 or so and struggled to make it through.  What I did learn was that The Wookie Storybook Jason had picked up in a book order at school actually came from somewhere - basically the book was a continuation of the characters introduced in the Holiday Special.

Yeah, Art Carney.  And then a parade of late 70's contemporary TV celebrities who all appear in corny skits or performing corny songs, because that's how things worked then.  My guess is the producers promised a handful of blow if celebs showed up and did a bit, and at the time a sort of cool, ironic detachment had already settled in where everything was a laugh if you shot it on video.  And especially if you were an adult and participating in superhero or sci-fi stuff.  That was dumb kid stuff, and you got to treat it as third class material. (I want to point out - this just was how things were... you kids have no idea what it's like to live in an era where everyone takes something like Avengers and Star Wars seriously.  Sometimes I think they had it right in the 70's, but that's for another day.)

The basic plot is that it's Life Day on Kashyyyk, and Chewbacca wants to go home to see his family, but the Empire is occupying the place and keeps checking on Chewie's house knowing that's where the rebel scum might show up.  The family includes a wife, Malla, a weird, weird looking kid named "Lumpy", and a grandfather who is positively grotesque, Itchy.

Luke, Han, Leia, Chewie and the Droids all show up by shows end, as well as in a cartoon which is the first appearance of Boba Fett, and the whole thing looks like a wonky take from Heavy Metal.

Unsurprisingly, Hamill looks raring and ready to go - very excited despite the weirdly small part he has in the special.  Ford looks miserable to the point of maybe looking queasy, and Fisher - while lovely - I'll argue looks like maybe she's been eating handfuls of pills (this is the best take they could get of Carrie on this day of shooting).

Most infamous is the wretchedly written and adequately performed Star Wars Holiday Special Life Day Carol brought to us by Princess Leia herself.

The whole thing takes on a weird spin if you've read Carrie Fisher's book and know this is probably the first time Ford and Fisher had seen each other since their illicit affair during the making of the first movie.

I mean, if the Star Wars cast had no idea how good or bad the movie they were working on was, it's fair that they didn't really get how bad the special would be.

What I do know is that - after it aired - Lucas killed the thing as fast as he could.  There's a reason that in the 80's and 90's, people didn't really talk about it - there was no way to get ahold of it til bootleg copies started showing up at Cons and whatnot.

So, yeah, I take Star Wars fairly seriously, but every once in a while I think about Bea Arthur as an alien dishing out tough love and insults (Maude in spaaaaaace) and I think "yeah...  keep this in mind.  This is also Star Wars."

I'm just glad it ever existed, that it's out there and we can all awkwardly cringe our way through it.