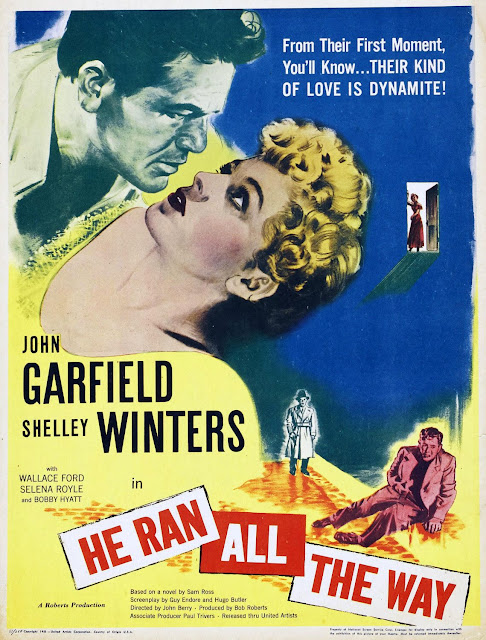 
I admit - I started watching this movie a while back shortly after it aired on TCM and then got busy and forgot to finish watching it, until now.  And I'm very glad I did.


On paper, He Ran All the Way (1951) will sound like your typical noir potboiler.  A thug gets in over his head on a heist, he's now wanted for murder, and he has to hide out.  Fortunately he meets a young, naive woman - desperate for affection (read: sex) - and she falls for our criminal.  The crook hides out in her family's apartment, holding them hostage (sort of) while he waits to make good his escape and tensions mount as the crook waits to get out and the hostages start to push back in small ways.

From The Petrified Forest to Key Largo to name-your-film, the trapped, desperate crooks holding someone hostage is well worn territory.  But what sets this film apart, I'd argue, is the tight scripting and stellar performances of the small cast.  And while the name "John Garfield" doesn't mean much to modern movie audiences, classic film fans tend to be in the know about the ahead-of-its-time character work Garfield did, how he elevated the performers around him, giving them something to work with other than canned line readings, and - really - how Garfield crackled with energy on the screen.

In a script by Dalton Trumbo and directed by John Berry (Tension), Garfield's slow revelation of his true nature and how that comes up against loving parents and a girl in need of attention - there's a lot to work with as the paranoia, narcissism and inability to cope kick in.  There's a level of the sociopath or psychopath that don't immediately appear in the film, but via his interactions with a pious family seeking to live in peace - violently disrupted - and his relationship with Shelly Winters' confused romantic (talk about having your illusions shattered) we get the rapid unravelling of a guy who thinks of himself as a good-guy in a bad situation who... is not a good guy.