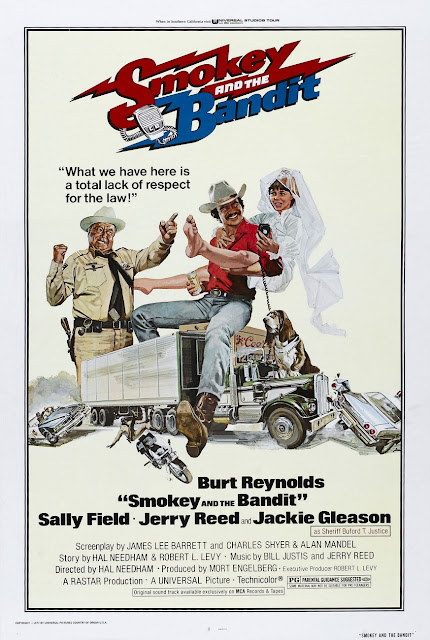 
If there's one truth about movies, it's that the 1970's were a really, really curious time for American cinema.  A lot of factors converged all at once, from a generation of people who emerged from the first film schools to financial dire straits and a sense of competition driving innovation to a sense of experimentation as a welcome formula to whatever was in the zeitgeist of a Jimmy Carter-era America.  This same decade gave us The Godfather, Taxi Driver, Star Wars, Cabaret, Alien and Saturday Night Fever.  Or name a dozen more.

Smokey and the Bandit (1977) is the Southern States, good 'ol boy answer to all this heady doom and gloom and retro-future space wizardry.  I'll never entirely understand how or why, but there was a pocket wave of movies in this era about working class folks, often centered around cars and beer and girls, and with a soundtrack ripe with 70's era Nashville (this is not a complaint).  Even Clint Eastwood dabbled a bit, adding an orangutan to the mix.  Most of those films have been forgotten or lost, but a few artifacts remain - and Smokey and the Bandit, a near live action Looney Tunes cartoon featuring Burt Reynolds in the Bugs Bunny part to Jackie Gleason's Yosemite Sam - is the sort of the greatest artifact of the movement/ genre.

Directed and partially written by former stuntman Hal Needham (The Cannonball Run), you sort of get the feeling that Bur Reynolds, Jerry Reed and Needham were sitting around thinking of a way to make a lot of money without doing much work, and somehow talked producer Mort Engelberg into giving them money, cars, a truckload of beer and not a lot of oversight, and in return he got a lazily scripted movie that relies at least 30% on then-romantically-involved Burt Reynolds and Sally Field to just improvise at each other while they drove around.  Add in another 30% for some car stunts, 30% on casting Jackie Gleason and just letting him be an asshole.

Look, I'm not sure when I last watched this movie all the way through.  College?  Probably.  Jamie had never seen anything but bits and pieces, so if I have watched it all the way through in the past 23 years, it was by myself, which sounds about right (next time you think I'm being a snob for not liking something, just know I'm being *arbitrary*).  It's not particularly great, and - frankly - for auto-related mayhem, The Blues Brothers has it all over this film.  But with Reynolds's passing earlier this year, and the film's relative unavailability in that moment, I was glad to give it another go.

But it is a slice of Americana that doesn't get much play in Hollywood - a working class movie out of the Dirty South that doesn't treat the locals like villains.  I may never have had much use for the particular flavor of Southern culture the movie is selling - but it's usually treated as an exotic, dangerous or frightening underbelly of America threatening our heroes, so it's at least curious to see a take that's at least so in the middle of it, the culture doesn't even get a comment.

As someone mentioned to me on social media - Smokey and the Bandit is an artifact of its time in a way Star Wars (also '77) is not:  in a pre-cell phone era, it's all about CB culture* and the slang used by truckers that crept into everyday use.  Coors is not yet a national brand and arcane laws prevent its transport to Georgia, where it is not sold.  Paul Williams is still acting.  Sally Field is banging Burt Reynolds.

Speaking of - Burt is absolutely at the height of his powers here.  I have questions about whether he had a script or not, how this movie was shot from day-to-day, etc... but there's no question about who Bandit is in this movie (it's Burt with another name).  And whatever chemistry Field (who was, is and will continue to be phenomenal) and Reynolds had makes for a pretty great dynamic as they zip along country two-lane blacktop

It'll never be the movie I liked as a kid (which I believe I watched at a neighbor's house and later on broadcast TV) through the eyes of an adult who may need, like, a plot.  And I'm not sure it's a good movie, but there is something oddly watchable about it, even if you can't be sure why or how this is even really a movie.  At least Jerry, Burt and Sally look like they're having fun.

*for the kids, in the 70's it was faddish for car owners to install Citizen Band radios where you could listen to chatter up and down the road, get warnings about cops in speed traps, etc...  In an era before internet "handles", CB'ers had "handles" first.  Heck, I remember being told my handle was "Red Rider".  I have no idea why a 3 year old needed a handle, but I had one.
Posted by The League at 12/22/2018 12:43:00 AM

Some movies required me to sort of grow into an appreciation of them over time. This is one I've grown out of.

yeah - I still laughed a couple of times watching it, and Burt and Sally are certainly charming, but... there's a reason my height of appreciation for this movie was in second grade.

I watched this a few months back (with sone comment on this here blog), and afer a bit of tine thinking about it, it still feels weird that this movie was only beat by Star Wars for top grossing film.

At least, now that I'm older and actually paid attention, I understood the setup for all the shenanegans.

The film did have another character you didn't mention - the '77 Firebird. This movie turned it into the car most every boy and dad wanted.

I dud enjoy seeing the Rat Fink car when the common folk did their part to stop the fuzz.

we're too young to really understand the zeitgeist of 1977 and why this seemed like such a good idea of a movie. But certainly it landed during the zenith of Reynolds' film career, but the happy outlaw business obviously appealed quite a bit (I mean, I don't think it's a mistake we got Dukes of Hazzard shortly after this).

When the Trans-Am showed up, I actually turned to Jamie and said "man, everyone wanted that car when we were kids". You're right, I think all of us had some form of Hot Wheel or plastic car that was as close to that car as we could get. As per adults - you DID see a fair number of these on the roads through at least the mid to late 80's. I would assume this was the "Dad is Having a Mid-Life Crisis" car now, but maybe it meant something else at the time.