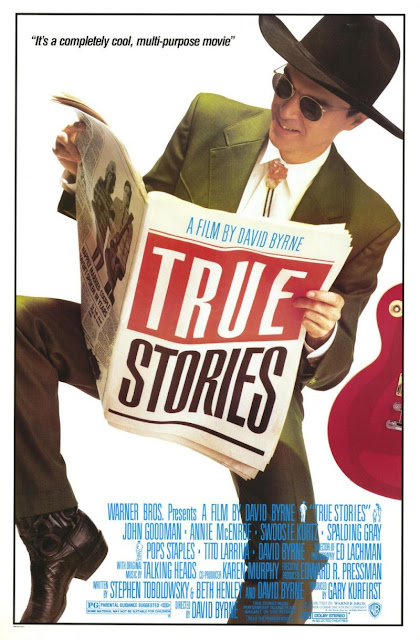 I remember liking Talking Heads growing up, stuff like Burning Down the House seemed kinda weird and out there when the videos hit MTV in the early 1980's.  I can't remember how I knew some of their other songs of the mid-80's, but I watched a lot of MTV in those early days and listened to a lot of radio.

In 4th grade I started in a new school which had a full-time art teacher, a novelty for me.  In the first weeks I was in the class, I first earned extra points by successfully stating "that's Picasso" about a Piscasso print he showed the class, and being aware of Picasso's cubist period because my third grade teacher at my prior school, for reasons I cannot begin to fathom, decided we should all read up on Pablo Picasso and his different phases.

That same year saw the arrival of the Talking Heads concert film, Stop Making Sense, which the same teacher then had running during class (I shudder to think what he shelled out for a personal copy of a VHS tape at the time), and asked us if we knew who this was and, yeah, I sure did.  Again - MTV - and found it weird my classmates did NOT know them.    But I recognized David Byrne's big suits and that this band had that lady bass player.  I did not know this was considered one of the finest concert films to date (and remains held in exceedingly high esteem), or what the deal was with the movie.

Anyway, I always wonder what that art teacher thought I was doing and up to as "kid into Picasso and Talking Heads".

By 1988, I used my allowance money to buy one of Talking Heads' final releases, Naked, from the local music shoppe, and that was it.  I was a Talking Heads fan, for sure.  By my second year of college I had all of their work but The Name of This Band is Talking Heads and listened to Stop Making Sense incessantly.

But, circa 1989 I was in Dallas for a gigantic convention of Lutheran teenagers and wound up in a diner which had a framed subway poster for what appeared to be another Talking Heads movie (see the above image).  I thought it was cool as hell, but I never came across the movie at video rental places, at least not until college, and no one I talked to had seen it.  Eventually I tracked it down - probably at I Luv Video or Vulcan, Austin's indie video stores (Vulcan still exists).

True Stories (1986) is a sort of fake-documentary about a week in the fictional town of Virgil, Texas.  We arrive, with David Byrne as our guide, as the locals are prepping for a weekend of celebrations, mixing local boosterism with the 150th Anniversary of Texas Independence - a very real thing - which we called The Sesquicentennial.  The town of Virgil referred to their event as a Celebration of Specialness.  David Byrne plays a sort of Marlin Perkins for the North Texas environs - characters derived from headlines of grocery store tabloids like World Weekly News.*

That's selling the movie short - there's a lot going on in the margins, maybe entirely in the margins.  It's episodic, following the path of a few townsfolk - not the least of which is Louis Fyne, a gentleman who wants nothing more than to find love and marriage, going so far as to advertise on television, explicitly stating that he's looking for a wife.  It isn't going well.  Louis is played by a young John Goodman in what is arguably his first major film role.

The movie also stars Swoozie Kurtz, Spalding Gray, Jo Harvey Allen, Pops Staples, John Ingle, and Tito Larriva - all playing characters pulled from the tabloids but given a sort of three-dimensional life, more than the articles.  As the town heads toward the big town talent show that's a showcase of "special-ness", Byrne as narrator tools around in a red convertible making observations that are both general and sometimes feel wildly Texas-specific from a certain era.

And while the movie is an absurdist cartoon (the fashion show is a terrific highlight) there's a weird element of truth to the movie.  It's not a movie out to make fun of or mock this growing Texas town, which has recently seen a lot of growth thanks to a computer factory coming to town in the past decade.  It's an exaggeration that never feels like an obvious or mean-spirited caricature, it's a commentary that's also filled with a sort of wonder about people - something Byrne has recently returned to in his music.  He may not believe in everything the characters are saying, but he believes in the characters.  Even Jo Harvey Allen's "Lying Woman".

Byrne and Co. were all art and design majors, and Byrne has never stopped creating or incorporating arresting visuals.  The first time I saw him play, he was wearing a unitard that looked like The Visible Man science toy you probably had in a middle-school classroom.  True Stories was conceived first as images and then as a story, or maybe both, given Byrne's non-linear thinking.  Set against the flatlands of North Texas, the screen is bisected into sky and land, with few trees present, a sea of grass and prairie I had/ have little love for, but recognize as part of my home state.  The tableaus establish and comment upon what action will take place.  Sometimes Byrne comments upon what we're seeing, but less so as the movie goes on. 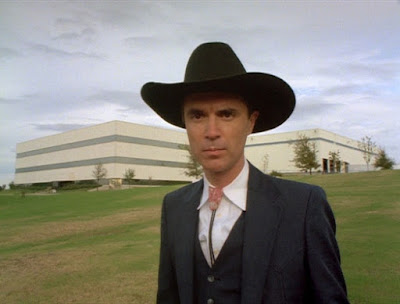 Of course, I was a kid in Texas during this same window, and there's no small amount of what I recall about Texas from this period when I'd moved to Texas at age 4, arriving in the Richardson area which was closest geographically to the filming locations.  By age 7 I was in Spring (north of Houston), and by 11, I was living in Austin.  Always at the edge of town in those suburbs built on dreams, houses imagined where a field had baked in the sun for a million years prior.  The people of Texas had been here for millennia before the White people came in - that 150 years of Texas more or less marked "since no longer Mexico" and the change of what was to what is.

The people in this movie look like the people I knew in Texas growing up - the drillteam costumes are what the girls wore at football games, the 4H kids could have been kids I knew at church (I didn't do 4H).  The un-varnished, un-polished people of the flyover states are living fine, dreaming their own dreams, unsure of what to make of the changes technology will bring to what was an agrarian town - unmentioned in the film, Red Oak was becoming part of the Dallas Metroplex, if not already well considered so at the time.  But it takes a while to shake off what was here before the malls and the large boxes where we put the people to work.

If the movie is a cartoon of what that's like, well.. I was 11 during this era, and finding everything increasingly absurd, anyway.  If anything, Byrne's look at Texas in 1986 is an outward expression of what I thought was going on under the surface, anyway.

The movie is worth watching for any number of sequences - from the "Dream Operator" fashion show to a monologue by Spalding Gray to a karaoke line-up that became a music video for "Wild, Wild Life".

These days, the "Puzzlin' Evidence" sequence in a church has gone from a 1980's mash-up of interlocking conspiracy theories and religion to... well, check in on twitter sometime (keep in mind, Austin spawned Alex Jones).  This contrasted with the voodoo ritual and Papa Legba sequence performed by "Pops" Staples, a call out to the unknown for love rather than fear - just great stuff.

I can't judge the movie anymore, and that's fine.  It's one I love watching, and I'm thrilled Criterion has put it out.  Shout out to NathanC who purchased the BluRay for me and sent it my way.  The disc comes with some terrific extras, both new documentary and video from the era.  There's a tabloid paper insert, and a CD including the non-Talking Heads performances from the film of the Talking Heads songs, the only version available, really, for the past 30+ years.

But, yeah, whether you're a Talking Heads fan or not, give the movie a spin.  One of my favorites.

*It's worth noting that World Weekly News was a sort of side-gig for a lot of comics folks, from what I understand.  So, imagine the same folks who were thinking up adventures for The All-Star Squadron also trying to come up with headlines that were hysterical but also led to longer storylines.  Example:  Bat Boy!
Posted by The League at 1/18/2019 10:47:00 AM

I Luv Video still exists too. The Airport location is still going strong.

that's great to hear! Here's to rent not going up at their location.