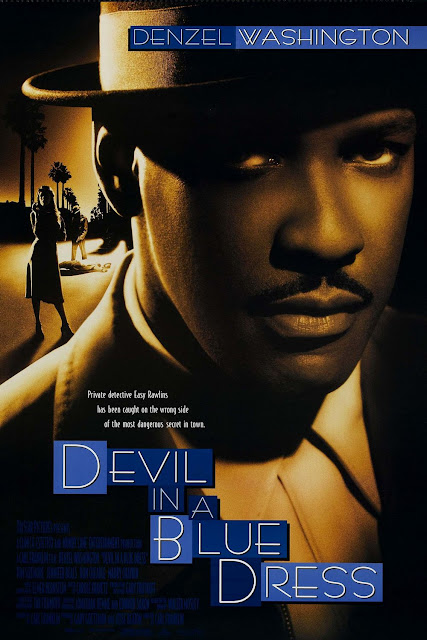 I'd intended to see Devil in a Blue Dress (1995) during it's theatrical run, and I don't really know how I didn't.  It was a wide release and ran for a bit.  In the intervening years I've watched more noir of the original era, not necessarily watching what came out as noir and neo-noir at the theater.*  The 90's and 00's saw a fair number of mid-century crime and costume dramas and glossy neo-noir films that I think a lot of folks today see in their mind's eye more than actual films of the original noir era.  Some of the films were pretty good (I love LA Confidential), others were less so (I really struggled with The Black Dahlia).

There's a lot to recommend Devil in a Blue Dress, even if it feels like writer/ director Carl Franklin was more intent on establishing a string of movies based on the protagonist's exploits than he was in actually getting into the why's and wherefore's of the story's central mystery.  It's one of the extremely rare Black-focused noir films, and does a phenomenal job of world building, leaning on familiar noir tropes and giving us new spin based on the Black experience of mid-Century LA.


Devil in a Blue Dress adapts Walter Mosley's novel, directed by Carl Franklin and with notable DP work by Tak Fujimoto.  It stars a laundry list of notables, beginning with Denzel Washington and includes Jennifer Beals, Tom Sizemore, Maury Chaykin and Don Cheadle just blowing up the screen as our protagonist's deeply unpredictable friend from back in Houston.

There's a mayor's race in the offing, people looking for a beautiful missing dame, hoods with itchy trigger fingers and a pretty good checklist of crosses and double-crosses going on at any given time.  But, in many ways, it's clear this film is intended to be the origin story for a private detective, how a blue-collar airplane mechanic with a well-formed sense of right and wrong falls into the private dick business and decides it's something he can do (and why).

While there's unmistakable 90's gloss to the look of the movie (which is exaggerated all the more by the weirdness of mid-90's filmstock), the detailing of sets, costuming, etc... is pretty terrific.  Just a  look around Washington's house has a lot of interesting details calling back to minor events in the film.  And inspiration is taken here and there from mid-century African American painters, which would be obvious even without the opening credits shot over an Archibald John Motley, Jr. painting.


Between the design and character work, there's enough there, even if the story, honestly, feels like it could have easily been worked out a whole lot more.  Whole character bits get *told* to the audience rather than shown, which... is weird.  But, also, honestly, maybe a bit obvious for folks who are familiar with the form?

Bealls doesn't get much to do, is maybe the weirdest part.  She's not a bad actor, but for a titular character, I was expecting a whole lot more.  Things happen around her, but she rarely gets a chance to do anything on screen herself.  Which is a shame, because director Franklin does well when he gives Washington, Cheadle, Sizemore and others room to work.  Even Chaykin's few moments on screen land more memorably than anything Bealls is able to do.**

In comparison to Sam Spade, Marlowe or the Continental Op, Washington's Easy Rawlins shares the same moral center in a world that doesn't care much for people doing good.  He's a deeply imperfect guy, but he's got a sense of right and wrong that almost everyone else in the film is lacking - typical of the Detective Novel, I guess.  But the subtext of Rawlins finding a way to do right by others with this detective gig, as he lands at by the end of the film, falling backward into it at the beginning, is some interesting stuff.  If the cops are the infamously corrupt dirt-bags 1950's LA is famous for, then who watches over the neighborhoods of Black families transplanted to California?

As a detective origin story, this works fine, and I would have watched a second or third one of these to see where they were going and see this unexplored side of post-war LA.

*since the early 90's, it's seemed like the primary driving force for many taking on noir was to talk or show explicitly what the films of the 40's and 50's couldn't, ie: weird or taboo sex.  We can play Chicken or Egg with Basic Instinct on this one, but it basically ended up generating a lot of fodder for Cinemax

**spoilers - with the current TNT drama I Am the Night airing, I'm curious how many films play on the woman of mixed racial origins "passing" as the crux of the mystery.  Hell, it's the story in Showboat.
Posted by The League at 2/27/2019 08:07:00 PM

Very underrated movie. No one I know seems to know about it, but it's one of Denzel's best. Carl Franklin directed another hidden gem in the 1990s called One False Move, with Bill Paxton and Billy Bob Thornton. It's an excellent thriller, and I don't understand why after directing these two high quality, if smaller films, why he didn't get bigger movies through his career.

I would like to watch this alongside fellow 90s noir, L.A. Confidential, sometime.

Yeah, given how well it embodies noir, I'd expect more chatter about it in noir circles as an examplar of neo-noir, or more talk about it in film critic circles, but it just didn't get that traction. But who knows? Enough people blog on it, maybe we can turn this around.