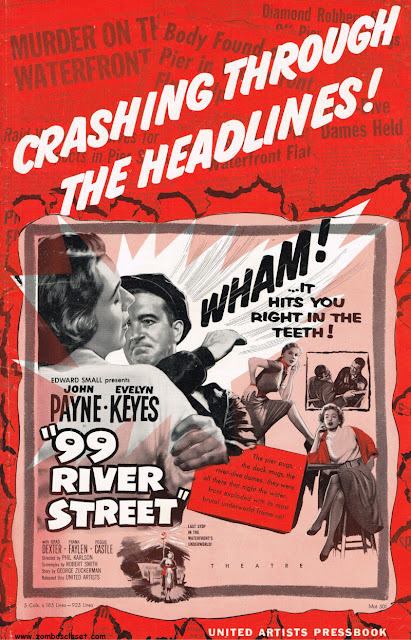 I've written up 99 River Street (1953) once before, and watched it something like 1.5 times before, but I genuinely really like this movie.  Starring John Payne as a former champion boxer, now a cab driver - he's trying to adjust to a world of broken dreams and settle in with the dishy blonde he married at the height of his fighting days when he finds her cheating on him.

In a twist of just insanely bad timing,* a pal - Evelyn Keyes - lures him to a theater to show the body of a man she accidentally killed when he tried to #MeToo her during an audition.  Just to make matters worse, the guy Payne's wife is running around with is a jewel thief who just heisted $50K in diamonds.


It's a lot for one guy in one night, but that's part of what makes the movie work so well.  It's not just a single force at work, everything collapses around Payne in a matter of hours, from his marriage to his faith in people.  While noir film is full of people pulling schemes and heists, there's something about the sheer thoughtless pettiness of others in this film - that, maybe if any one thing had hit Ernie, our ex-boxer, he'd have rolled with it.  But all at once, and you kinda feel for the guy who looks like maybe he's going to set fire to the world.

Evelyn Keyes falls into the category of the actor who had lots of talent, but somehow never quite got the breaks - either her character in this film or in life. Here she has a monologue that's... frankly pretty incredible and unusual for the genre where people tend to speak in bitten off soundbites.  She's almost the anti-femme fatale in this movie, given a strong part of a gutsy, intelligent woman who needs to clear her conscience.

I hate to give too much away, because the plot is an excellent, winding number pulling all of the elements together. And while Payne and Keyes really are top-notch (I've heard people say unkind things about John Payne, and those people are nuts), the supporting cast is also pretty great.  Brad Dexter should have been used a whole lot more in this era as a shark, but we do have Jack Lambert as a heavy (did he play anything else.  ever?), and Jay Adler as yet another brainy guy working a crime amongst hoodlums.  As the wife, we have Peggie Castle, who is photographed like a special-effect, but who is more than legs and platinum hair in her scenes.  And, last, good ol' Frank Faylen plays good 'ol Frank Faylen, running the cab dispatch in this movie rather than driving a cab in Bedford Falls.

This movie would be a good chance to show those newer to what constitutes "noir" how the notions of a failed American dream, a dangerous woman (x2), ruthlessness and a shaky system all work in context.  Heck, there's actually a lot of detective work by our lead as he tries to sort out what the heck is happening, if you think noir requires sleuthing.