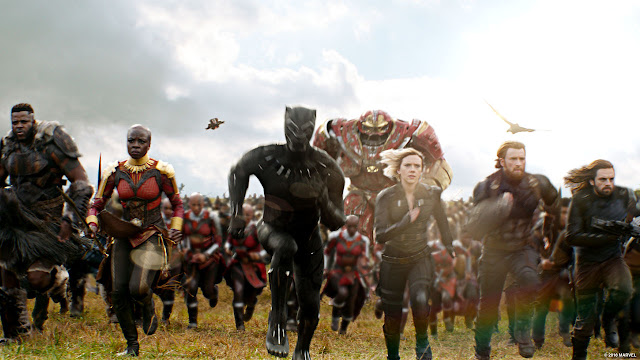 We re-watched Avengers: Infinity War (2019) not to blog or podcast it, but more as a refresher before heading into Endgame next week.

There's an incredible amount of good stuff in this movie, and as much as others are dumbfounded by Avengers pulling together a superhero team on screen, this is the one that I watch, dumbfounded.  Getting people on the same screen is a matter of money and scheduling  Getting a storyline to work across 20 movies over a decade while being purchased by Disney is... well, you try it.

Unlike most actual comic book superhero cross-overs - Infinity War actually works.  Characters remain in character, everyone's arcs line up and get them here, and even in the small bits we see them, we understand who they are, where they're at, and how they fit in.  If Hickman's Infinity failed to deliver, it was because it felt like a jumbled mess of heroes in costumes in non-descript locales performing meaningless tasks while shouting under fire with no real relation to who was saying what. Somehow, that is not what we have here.  Everything is specific, even new places and characters.

Part of comics reading that, to this date, we never really saw translated to the big screen, is that sometimes our heroes lose, man.  Even when they win the big battles, there's often fallout, sacrifice and calamity to deal with.  Infinity War apparently freaked out a whole lot of people who don't read comics, who expect that reset to the status quo to wrap up the story every movie.  But that's not what cross-overs are for, when done right (which is why every ten years is probably the right frequency for comics cross-overs of epic scale, Big 2 publishers..., not every year.)