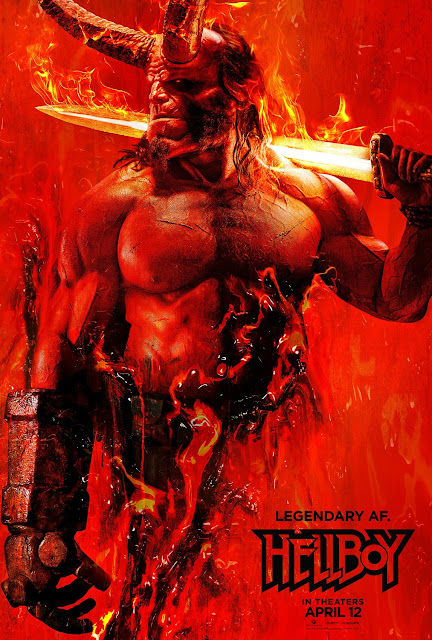 Stuart's flight was canceled, grounding him in Austin til tomorrow and I was planning to see Hellboy (2019) at 7:20 with SimonUK, so world's collided this evening as SimonUK and Stuart met, sat on either side of me and then both proudly announced their fealty for director Neil Marshall.  Truly, these two dudes are two peas in a pod.

So - yeah, I'd heard Hellboy was supposed to be terrible, which is a good place to set your gauge when watching the movie.  It both earns the bad reviews and maybe defies them a bit.


What I said to the fellows when the movie ended is that watching Hellboy was a bit like seeing what superhero movies would be like if Marvel movies had never happened.  It's a tone-challenged, water-downed version of a comics-concept (as I understand it, I'm not a Hellboy comics reader) that doesn't ever quite succeed at being the original thing or another, new thing.  Money went into designing our hero, but even there - I've got quibbles.  And the budget isn't quite there to do what they're trying to do, so everything looks kind of... bad.  Like, I hear people complain about the CGI in Black Panther, and I want to sit them down for the runtime of this movie and just Will Smith in front of the screen.

The CGI, which is, like, 35% gore, never actually feels any more like gore than playing Doom in 1993-4.  Like, I *know* that's supposed to be blood and guts, but...  since it looks like renders from 1999 or so, it's just hard to be impressed, and maybe feel like they're kidding?

There's literally a scene where Hellboy fights three giants (don't ask, it has nothing to do with anything) and it literally looks like the bad motion of a not particularly important NPC in name-your-game from about ten years ago.

The make-up isn't always convincing.  There's a Baba Yaga puppet/ CGI mash-up that they clearly thought was going to be more convincing than it is.  Hellboy himself looked better as Ron Perlman - Harbour almost looks... wet... all the time, and the headpiece is so big he looks a bit bobble-headed in profile and like someone's acid trip whilst looking at pics of Glenn Danzig from the front.  And the arm looks @#$%ing awful and doesn't work - dangling a good 10 inches below his real arm so you can tell there's some sort of device Harbour must have been able to manipulate to make the fingers open and close.  I suspect the judges on Face-Off would have been pretty critical.

Our story is roughly that in the 6th Century, an immortal witch (Milla Jovovich, who is weirdly the best cast person in the film) was cut into pieces by King Arthur.  In 2019, a grumpy pig-man somehow is the first to find and reassemble the pieces in the hopes that the witch will give him power to defeat Hellboy.  Meanwhile Hellboy is sent to England to help old friends of a terribly miscast Ian McShane playing "Father" hunt giants.  But everyone is getting spiritual texts from the dark realm telling them the world will end and its probably Hellboy's fault.  With the help of a plucky spiritualist named Alice and lantern-jawed Daniel Dae Kim, Hellboy tries to unravel the mystery.

For the not-greatness of the effects, the movie is mostly about the effects.  There's a character arc in there for Hellboy, but at best I think the movie makes a convincing argument that maybe he really should become the Demon King and kill everyone on Earth both because of the human v demon oppression and also because the fantasy sequence they put out there is boss as hell.  But, yeah, every scene is fake bodyparts strewn about, loads of terribly realized CGI blood, squishing heads, etc... all of which is so cartoony, I'm not sure what they were on about.

All of this plays into a tone issue with the movie - is it supposed to be funny?  Worse: is it supposed to be serious?  Or, much like superhero movies of the 1990's to X-Men, no one actually cares and they're just making this thing to have "comic hero movie".   Thanks to the fact the movie begins with an untold tale of King Arthur, at first I thought that the film was going for an Army of Darkness sort of thing, and had the passing thought that the movie had maybe been misunderstood, but... no.  It's not that, either.

I'm not a fan of Neil Marshall, I guess, but it's hard to say that the film is his fault or problem.  I heard the set was an unhappy one and it's clear whomever cut the movie had almost no sense of pace or story and was just cramming scenes together to make sure everything that was shot got at least some time (even when details contradict themselves - is Daniel Dae Kim's character an ex-soldier or ex-actuary?)

The truth is, though, I didn't really hate Hellboy.  I might even watch it again.  It very much reminds me of when I would just go to the movies in the summer and have zero expectations and if I found something to like in a genre film, I considered it money well spent.  Having had seen plenty of worse movies, this one was... forgettable, sometimes entertaining, pretty dumb in a lot of places, and worked so hard to ensure we'd all want to watch a sequel - staying for the post-credits scenes was totally worth it, just so you know they are absolutely not going to get those sequels into production.

The problem is: we do have good superhero movies now, and at least Hellboy the first can be considered among those movies.  This is in no way an improvement, and fairly genericizes the specific world Del Toro brought to the screen and fails to capture what's interesting about Mignola's style.  And, as I'm 44, I saw the Del Toro one as a voting-age adult and have fond memories (and a DVD somewhere).  This just feels like a SyFy channel original packed with swears and gore to earn a Hard R rating (despite a lack of nudity).

Most bizarre: the film casts American actors in key British roles while being filmed in Europe.  Yeah, I don't get it either.  But Superman and Spider-Man are British actors, so I guess it's all good in the neighborhood.
Posted by The League at 4/18/2019 12:44:00 AM

I lol'd at the Will Smith graphic. Thanks for the movie night, it was a great time.

Yeah! I was sorry you didn't get home to Katie and the kids, but glad for me so we got to catch a movie together. Hope you're not too wiped today from the early flight out.

I agree the movie makes a better case for Hellboy wiping us all out than not. I also had to wonder why they set it in modern day and still kept his origin in the 1940s. That makes Hellboy almost an octogenarian; a little old to be going through this coming-of-age my-father's-not-really-who-I-thought-he-was stuff.

But I still had a good time with it.

yeah, agreed on the aging thing. The movie wouldn't have been better or worse set in, say 1980-1990. Maybe they just didn't want to mess with it with extras and figured the few lines about "magical slow aging for everyone" was enough. It DID give them opportunity for Hellboy to have seen plenty by the time we meet him, but, yeah... the character and interpersonal stuff all felt stunted.