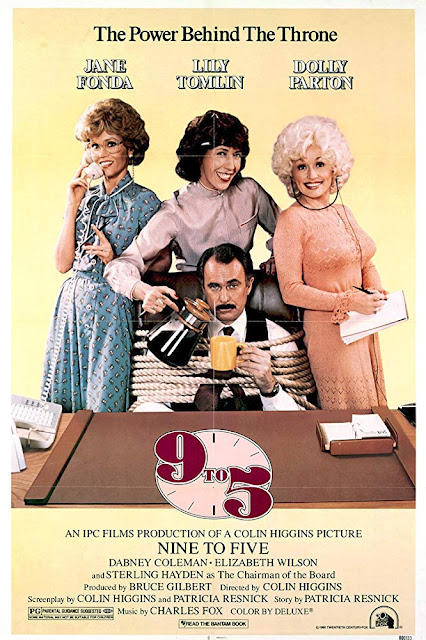 
I was about five when 9-to-5 (1980) came out, and the theme song by co-star Dolly Parton was everywhere for about a year or two, remaining a staple of radio play to this day.  Because the movie dealt with non-space-battle, gorilla or robot related issues, and I think was an R-Rating in the era of G, PG and R, I did not see the movie at the time.  I was pretty sure then that it was not a sex romp based mostly on how many people went to see it (it was huge), and just never got around to seeing it as I grew up.

Which is weird - I'm not a giant Jane Fonda fan, but I find Lilly Tomlin brilliant whenever she's on a screen in front of me, and... I mean, Dolly Parton!  If you don't love Dolly Parton, I don't want to know you.  And Dabney Coleman was a thing back in this era - people loved him (he might have been a great take on J. Jonah Jameson in a 1980's-era Spidey movie if a studio had gotten its ac together.  I'm just saying.)

From a purely sociological standpoint, it's fascinating to see a movie about the women of my parents generation who were going through the first phases of a lot of what we deal with today, but based upon the rules of the era where women were housewives, teachers, nurses and... secretaries.  And we've all seen the role of secretaries on Mad Men (or should.  Sucks to your GoT, give me ad executives drinking on the job).


Jane Fonda plays a woman going through divorce after her husband left her for his secretary - a button down square who is taking a job as a secretary of sorts herself (it's not clear, and kind of unnecessary to know, but I suspect her role was eliminated by the late 90's thanks to computers).  Lilly Tomlin is a widowed mother of four who busts her ass and has seen her male colleagues promoted around her while doing less.  Parton plays the direct secretary for Coleman, who is aware of her boss's cruder intentions but is an expert in fending off advances while keeping the man's ego intact.

One bad day gets lands them all at the same bar, forging a friendship.

I don't even want to get into what follows because it's a spoiler on a three decade old movie, and while it can feel a tad meandering at times, it absolutely works - there's more narrative economy to the film than I understood as the film unspooled.  And some great fantasy sequences as each consider how they'd do in their sleezebag of a boss.

There is a refreshing "working class" aspect that the movie brushes against - that just because you aren't working in a factory doesn't mean this isn't work.  Especially for women (I'd forgotten the phrase "pink collar" til this movie) who have to do all the heavy lifting to keep a place operating and who receive little credit beyond being seen as swappable drones.  The 1970's liked to romanticize gear-heads and whatnot, and this movie falls somewhere between that and mid-80's sexy corporate workplace movies (see: Working Girl).   But there are a lot of people in those buildings who are plodding away, hoping for advancement, not immediately leaping from mailroom to boardroom and silk sheets with Helen Slater (shut up, Michael J Fox).

What's interesting about Coleman's character is that - while portrayed as cartoony (the whole movie works this way in a tone pretty familiar to the era) - his character is mostly a machine that repeats all the old saws you hear from actual humans in positions of power in the workplace when it comes to their reasoning around promoting the dudes ahead of the ladies, rationalizing pay discrepancy, verbally abusing their subordinates, etc...  If anything has changed in the 40 years since the movie showed up, it's that the dialog lifted from articles in the paper and magazines is pretty well baked into the public consciousness and many people know it when they see it.  But... all of it still exists.  Aside from the fact the desks don't have computers on them, everything in this could be done today (and I'd argue you could remake this movie and not change a thing aside from a less-white cast).

If the movie accidentally undercuts itself, it's that there's such a wish-fulfillment aspect to the finale that the hard-fought gains seem almost fantastic.  In the third act, our heroes sideline their boss for weeks on end, and implement changes that do increase productivity (stuff that would absolutely work IRL) but it's hard to see implementing on-site childcare as a realistic idea when you're mixing in animated vignettes and our boss's comeuppance is suggested to end in his hilarious demise off-screen.

I don't want a preachy finale - this is a solid comedy and I really found it funny - but it's also speaking truth to power and I'm not sure it didn't coat the ending in so much frosting that you could dismiss the whole thing as a romp/ fantasy.

I do want to go back and see what was said about the movie at the time.  I'm sure there was a wide range of "getting it" to "oh, those daffy gals in the workplace!".

Anyway - men, we can do better.  It's worth a watch of the film just to know when you're straying into Dabney Coleman territory and see what people are hearing when you think you're saying reasonable things.
Posted by The League at 5/06/2019 10:59:00 AM