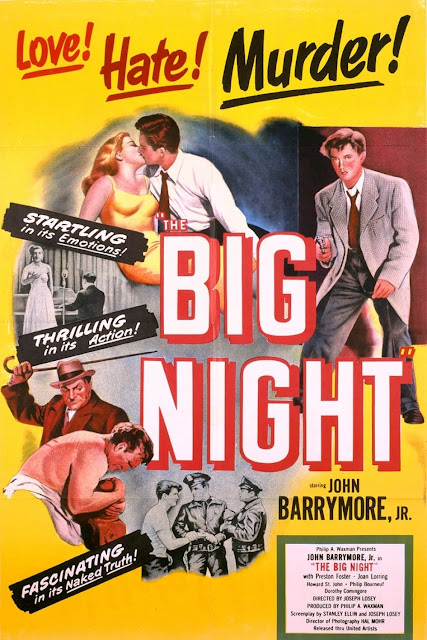 A movie full of interesting ideas and what I'd give a solid B- for execution, The Big Night (1951) follows a sweet kid as he spends a long night trying to get back at the man who humiliated and beat his father in front of a crowd of people.

On his 16th birthday and believing himself to be entering the world of manhood, Georgie LaMain returns home to his father's Bar & Grill where he's met with a small, sad party made up by the tavern dwellers.  Moments after the candles are blown out on his cake - with little explanation - local sports writer Al Judge enters the place and orders Georgie's father from behind the bar and to remover his shirt.  He then beats him mercilessly with a cane and takes his leave.


Georgie swears vengeance and stumbles out into the night, going to a boxing match where he figures he can find Judge.  Here he meets a professor of journalism, Dr. Cooper (Philip Bourneuf) who - despite an affected refined persona and a certain usefulness, is a problem unto himself.  They bounce from bar to bar, meet Cooper's disaffected lady friend, and wind up at her apartment where Geroge meets her sister (who mistakes George as a fella old enough for her).

We get the inevitable confrontation, and, of course, twists and turns.

Oddly, and remarkably, the biggest gut punch of the film has almost zero to do with the actual story.  Exiting a bar, a drunk George runs into a Black torch singer he just saw perform, and wants to compliment her, but winds up dropping a racially charged back-handed compliment.  It is the exact sort of @#$% drunk young dudes do all the %$#@ing time, but at least George realizes his mistake.

The core of the idea - of a swell teen who decides he needs to avenge a wrong, and who thrusts himself into a late-night world of adults with adult and noirish lives and motivations, and played straight rather than for laughs (ie: 80's teen comedies), is fertile territory for an examination of the shadow worlds just out of sight - and as a "loss of innocence" story, it's even more fascinating as the kid really only has himself to blame for falling down the rabbit hole.  And, of course, pushing for answers, he finds he can't even hang on to the picture he's held his of his father, or his own past.

The role of women in the movie could get a chapter in a thesis - it's some complicated stuff, from the dad's AWOL girlfriend, to George's mother to the barfly and her sister.  Even the purity of the younger sister is kind of odd and twisted by the smell of desperation.  But the role of a young man's idea of masculinity and what he feels is his responsibility is worthy of someone's critical eye.

Maybe it's all a lot for a single night, and it certainly isn't of the calibre of movie-making of, say, Night and the City (recommended!), but it's just kind of so weird and dark - and I genuinely did not know what was coming next - I've seen worse.
Posted by The League at 1/22/2020 11:09:00 PM