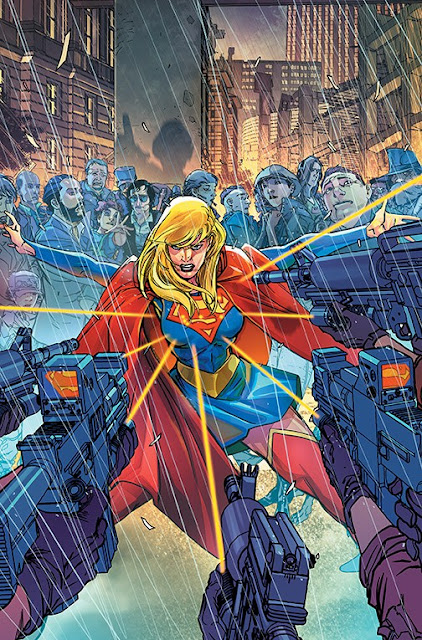 
While it's impossible to figure out how many people are watching Supergirl - the TV series - thanks to streaming, stealing, DVRs, the nonsense that was and is the Nielsen ratings, one can assume: probably hundreds of thousands of people are watching this show.  Meanwhile, the comic book of the same name and - ostensibly - same character moved about 11,500 copies in December.*

I have no doubt that inside of 24 months we'll see a newly launched Supergirl series, and, frankly, the character needs it.

I gave up on Supergirl after one or two issues of the New 52 relaunch, which was just lazy and bad.  Maybe not as holistically broken as the Supergirl series launched after DC brought back Kara Zor-El in the early 00's and decided she was going to run around the DCU weeping uncontrollably and creating a lot of property damage while in a tummy shirt (I never understood who that series was for).  But part of DC's curious lack of planning and/or editorship inherent to so many of their titles was on full display when Rebirth occurred and no one was ready for it at the Supergirl office - those early issues were just a continuation of the New 52 Supergirl's backstory, making it a terrible jumping on point.  Made all the worse by the fact that it was *action* for those issues full of characters who'd received minimal exposition for us just dropping in.

I will give credit where it's due:  A quick attempt was then made to establish a status quo and supporting cast, all of which was abandoned within, I think maybe a year.

Look: this is the problem for virtually all non-Superman and Batman books at DC and this is (a) the source of the problem DC has with sliding sales numbers over the long term, (b) the thing they cannot seem to learn from television, and (c) why I don't really bother with anything but the select titles I pull every month anymore.

Pretty clearly, writers and artists are coming onto these books with a minimum of prior knowledge of what was happening previously and a minimum of interest in making Supergirl (or, name a title) a flagship book at DC.  Because sales were previously low-ish, ignoring prior world-building gets ignored and our hero is tossed into new circumstances.  In the case of Supergirl, that's very, very often without any notion of her working to establish a home, a civilian name, friends, family, etc...  Or having the writers do that heavy lifting.  Instead, Kara spends each issue in costume.  She is *only* ever Supergirl, which means the comic becomes about the action scenes, but those occur in a context-free environment.  She has absolutely nothing at stake other than "I am a hero, thus, I must do this".

As mentioned, the TV show has been going on for several seasons, putting out roughly 22 episodes, each 45 minutes in length.  Characters have stuck with her over the run, some leaving and some returning.  She has a human adopted sister.  She hangs with Martian Manhunter.  She's frenemies with Lena Luthor.   She has an apartment.  A mom who sometimes shows up (both birth and adopted mothers).  She's got a lot going on in addition to the threat of the week.  In this context, Kara Danvers and Kara Zor-El have/ has people to talk to, and it isn't always a new conversation with someone she just met.

The supporting characters have had a chance to grow, too, and find strength in each other.  And this isn't a particularly dazzlingly well-written show.   This is the incredibly low bar for the basics of an ongoing, serialized story.  And that can and should be what someone should expect picking up a comic book with a number on the cover that is not #1.

Look, I enjoyed Andreyko's storyline that took Supergirl into space, but she came back to absolutely nothing.  We saw her adoptive parents who are now sidelined by participation in the Leviathan storyline, but any cast members the series had tried to insert before got no real mention (I think I do remember a panel or two of one of the characters and a "have you seen Kara Danvers?" poster).  But the many months of their storyline before the arrival of Bendis interrupting everything?  Does not matter.

The point is:  The only thing the inconsistency breeds is a consistent shedding of readers until you restart with a new #1 and the chance that *this* time, they'll find a way to make it work.  It's remarkable how they just kinda don't even try to build a core audience via the storytelling mode of TV.  If you're going to do what DC did with Supergirl around Rebirth, you need to at least pause for a beat to let your audience catch up, but then, fine, go forth.  I can always track down those older stories and enjoy the continuity if I feel like it.

I'm likely to always pick up Supergirl titles, at least for an issue or two to give them a shot.  But, man, when I think about how this works and how it's reflective of the vast, vast portion of DC's line of comics... it's just depressing.  Supergirl has been canceled over and over since she became the headliner in comics like Adventure and had solo titles a few years on.  They'll try again.

Maybe the 12-issue maxi-series format is the way to go for supporting characters or not-Batman.  I'd support that idea.  It's working for both the Lois and Jimmy series.  And maybe it's worth looking at only doing one of these series when there's enough story to tell that it warrants 6-12 issues.  Having a running, ongoing series isn't what I'm asking for, necessarily, but what I am asking is that DC have a hard look at what they're doing when it comes to telling a coherent story in a serialized fashion.  There's literally no reason for how low they set their own bar.

I do get the problem of "too much continuity".  But I also know most of us walked into *name your series* at age 11 or so and were able to piece things together and stick with the title for the long run.  And part of that was longtime characters discussing what happened previously - not just characters who existed in the moment of the story.  Context clues!  They're neat.

What's not at all surprising is that what's making the main Superman stories work better than they have in decades over in Action and Superman (despite some clunky ideas and herky-jerky execution) is a mix of Bendis' overall world building/ restoring the Daily Planet as the center of the book, complete with supporting characters, and his knowledge of how to have character moments that do not involve punching.  He may be causing unintended ripple-effects in ancillary titles, but he is doing *something* right here.

DC can do better, but until there's some serious retraining of editors and rethinking from top down, the patterns are going to remain the same with the same diminishing returns.  And there's just no justifiable reason for it when you could put some effort in and get better results.


*for some depressing news, the 10th best selling comic in December was Superman #18, which only moved about 66,000 copies.    But if you really want to be depressed and further understand today's comics market, everything above that was pretty much "grimdark for kids in black t-shirts" stuff.
Posted by The League at 2/16/2020 11:08:00 AM

I really like the 12-issue maxi series. It's like a long term relationship, and not a marriage. You don't have to feel bad or dread dropping the title. It's just over. It says so right there on the cover 12 of 12.

yeah, and I like that they probably had a beginning, middle and end in mind before they ever put pencil to paper. 6 issues is too short, but 12 feels like a full-length story. If you need a sequel, go for it. But it offers up a kind of sealed story with closure, even if the characters are ongoing.