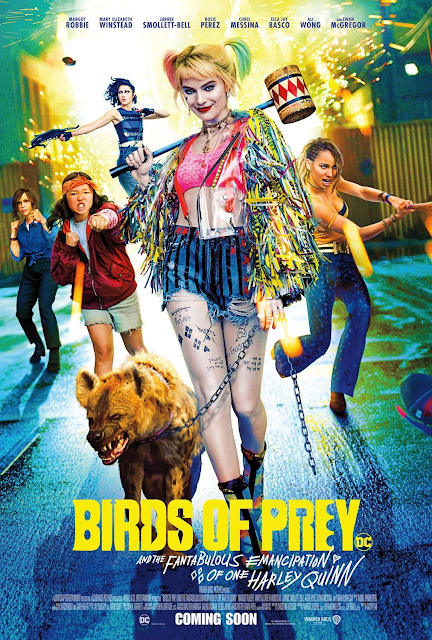 
So, look, it's on me for going to see a movie featuring a character I'd already decided wasn't my cup of tea.  And, hey, funny thing, not much changed about that between 2016 and 2020.

This is a movie that has a mission statement to let you know it is wild and crazy and hilarious, but I never quite felt like it managed any of those things.  Part of that may have been that the movie decided that the thing Suicide Squad did where the movie started 3 separate times could be expanded upon, and rather than tell a story, it kind of just keeps starting for about 2/3rds of the run time.  What would have been 2-5 minute bits in another movie using movie-short-hand to get the story across (and no one in the movie has a particularly original backstory that couldn't be summed up in 2-3 sentences), as Harley narrates the film she can't tell the story in order (but somehow knows background she has no way of knowing for each character, but whatever), the movie just keeps introducing us to our heroes.

Full disclosure:  I read almost the entire first run of Birds of Prey the comics series featuring Oracle, Huntress and Black Canary before the cast expanded.  I was 17 or so when Batman: The Animated Series came out, and saw Montoya and Harley Quinn become characters we saw come to the comics.  I picked up the first issues of the Harley Quinn series (and subsequently sold them for too little money).  I read the entire run of Gotham Central, all of 52, and every Montoya as Question comic I've stumbled across (she's currently appearing in Lois Lane as a main character).  I read a variety of Batman comics and other series where Cassandra Cain appeared and became Batgirl.

I am not currently much of a Batman comics reader, but, anyway, it would be impossible for decades of comics-reading and cartoon-watching not to color my impression of the characters because, hey, how characters get translated to film is of interest to me and part of how I judge a film.  And DC mostly has just stuck to the 1990's take, which is "we are going to actively ignore the source material", missing every vital lesson of Marvel's success.

The greatest deviation is "Cassandra Cain", here cast as a young lady who is supposed to be a world-class pick-pocket, and seems kind of teen-cranky.  I know Cassandra Cain as the near-mute young woman trained from birth to be an assassin who turns her skills to the side of the angels.  And while I'm always happy to see Rosie Perez getting work - the point of Montoya was that she was a detective on the curve to do well in GCPD and stuff falls apart for her, eventually she takes on the identity of The Question.  If the plan is to have a BoP movie, as much as I want to see The Question on screen - sadly - I really want someone younger and on the learning curve, not someone who should be counting the days til they can collect their police pension.

Both Mary Elizabeth Winstead as Helena Bertinelli/ Huntress and Jurnee Smollett-Bell as Diana Lance/ Black Canary are close enough echoes of their characters that whatever personal spin they put on them (MEW's social awkwardness is a non-aggressive brand of what's in the comics) that I can get behind the changes.  And, frankly, when we do get to Canary Cry - that scene works, man.  I would have been far more interested in the movie about Huntress, BC and Montoya than the very supporting roles to which they were relegated - and I do have a few questions for producer Margot Robbie on that front.

Our villains are Black Mask and Victor Zsasz (and literally every male in Gotham City).  And, if nothing else, I enjoyed watching McGregor play Black Mask - because he was clearly having a good ol time and had quite the curious relationship with Batman all-purpose psycho, Zsasz.

The movie is set in a Gotham that reflects the vibe of a lot of modern comics - there's a goofiness to it that is at odds with the wish for grown up violence to sit alongside it.  Which kind of makes sense - comics are pretty goofy, but we still want to bring in the sorts of threats from our villains that raise stakes as much as any action-thriller, but post-Deadpool, wackier comics have become a haunt for charming ideas to take roost, the tonal dissonance part of the package.  I get it - I read comics about a gent in red underwear and cape who has a flying dog but has to stop the world from annihilation on a bi-weekly basis.  I'm just not sure I find all of the same things funny that the makers of this movie find funny (I think I laughed three times during the run time, and I know one of those was at Ewan McGregor and another at Bruce the Hyena).

The movie is also Rated-R, DC's new go to after seeing Deadpool make a mint of money, and I do genuinely wonder if some of the excesses of the film didn't need to be there and if a PG-13 film would have worked marginally better - but they did seem to want lots and lots of bone-splitting violence alongside their stuffed beaver in a tutu.

I wouldn't say it's tonally inconsistent, because the film is definitely consistent with a certain jaunty, glittery sense of joie de vivre paired with a super-villain's sociopathic disregard for anyone but themselves.  It's a vibe I think a lot of people find fun!  Me, maybe less so.  And I'm not sure what might have sold me more on what they were doing.

But, yeah, it's a weird movie.  There's all this set up, but we don't get our characters into the same room - the titular Birds of Prey - until the 3rd reel.  They don't know each other and have no shared experience - it's all through the thread of Harley's misadventures that she points out how they're all tied up with the siege playing out outside their window.  And then they fight for 20-25 minutes.  It just feels like that "hey, we're all in this together" bit needed to come about an act earlier, and then build something from there.  Because the denouement just... sort of occurs, like "hey, you'll come back for a spin-off, yeah?"

There's just no real gelling of the cast - it's a few people thrown together and working through an immediate problem, not people coming together and finding the worth in each other, which is perhaps appropriate in both 2020 and a movie where the lead is Harley Quinn, who, the day before the movie, was a gleeful partner-in-crime to a psychotic killer.  I'm not actually *entirely* sure how the events of the movie are anything but a distraction from her romantic woes.

In short: I think this should have either been Harley's movie minus the BoP, or it should have been a BoP movie, but "what I would have done" is sort of an ugly argument.  It's just a byproduct of what I felt like were a lack of adherence to how we usually get to know characters - the whole "show, don't tell" stuff.  And this movie tells.  A lot.

The good news is that the final fights are actually pretty good.  There's some great stuff in there.  It's a romp with some all-new things I'd never seen on screen when it came to stunts and ideas for fight-stunts.  But there was a point when I got the same weariness I experienced during John Wick 3 where I just wanted them to get from point-A to point-B, because they kinda have to for the movie to work, and this extended fight (the evidence room brawl) just keeps going.

This movie is going to have furious, ready-to-punch defenders, as all DC movies seem to have.  Heck, people were saying Shazam was the best superhero movie in years (it was not.  Not even close.).  But it does fill a niche and appeals to a demographic that is not me.  That's the glorious thing about comics movies in 2020 - there's so f'ing many of them, there's kinda stuff out there for a more diverse audience than I ever thought possible.
Posted by The League at 2/10/2020 12:45:00 AM