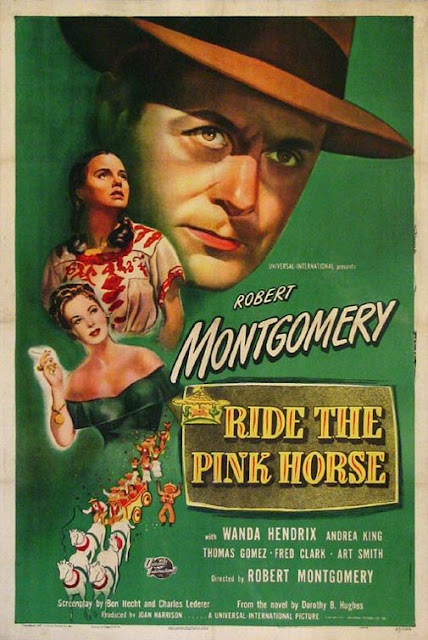 I've been meaning to read some Dorothy B. Hughes, and now I'm deadly curious.  She wrote the novel this movie - a gritty, all-in-one-night (well, two nights) - is based on, and it sounds like the book is even meaner.


Far from the usual noir setting of a bustling coastal or Midwestern city, the story unfolds in New Mexico in a small town where the roads aren't all paved.  Major characters are (supposed to be) Hispanic (and most actually are), speaking Spanish in an era when I can barely recall this happening - even in the film Border Incident.

The film stars Robert Montgomery as a gunman rolled into town to get revenge for the death of a friend, killed back East at the orders of a locally powerful mobster, played by "that guy" actor Fred Clark.  The film co-stars Wanda Hendrix (who was very Anglo) cast as an Hispanic girl from an even smaller town who falls for Montgomery's gunman - not that he's trying to woo her.  The breakout performance is by Thomas Gomez, playing the owner/ operator of the carousel and who I last saw in Force of Evil playing John Garfield's brother.  Utterly convincing in both roles and vastly different in each, Gomez received an Oscar nomination for his part here as Pancho.

Montgomery directs himself again, as he did in Lady in the Lake, but to much better effect when you can actually see the actor and aren't constrained by the gimmick of subjective POV.  And, frankly, I found the direction solid throughout.  Produced by Joan Harrison, Hitchcock's former partner, the film feels like a skewed version of noir that's escaped the confines of the coasts and found itself in the Southwest.  Class and race infiltrate every scene, the privilege of the White characters surrounded by the lives going on around them, the two separate and colliding in Hendrix's Pila, Pancho and Montgomery's Gagin.

The backdrop of the small city never feels quiet - Gagin arrives as the annual Fiesta is set to begin, and it's music and crowds in the street.  Trumpet music proliferates the backdrop of the tough-guy conversations and displaces our Anglo leads.

While not exactly Night and the City, Gagin's path is full of twists, oddball alliances and betrayals.  It's a tight narrative.  After the picture wrapped on TCM, and I'd been thinking how much *better* Montgomery was in this than in Lady in the Lake, Muller posited "what if we'd had actors X, Y or Z" in the role, and you do wonder how much stronger this film might have been, and how much more of a reputation would it have today?  Montgomery gives himself plenty to do, and he's buyable, but I'm not sure what, say, a Bob Mitchum would have been like here instead.

What's curious is that the story breaks from the singular POV of a white, male character undergoing a noir-ish descent and is as much or more the story of Pila's rescue of Gagin as he falls further and further down the hole he's in with no expectation of reward.  She's the anti-femme fatale.  Fate would deal Hendrix a hand that would sideline her path to superstardom, but she is sympathetic in the role - if it's bizarre in 2020 to see her among crowds of actual Hispanic people.  If she's *good* in the role is a tough question, depending on what you're looking for and the complications of Hollywood under the Hayes Code, which forbade even a hint of romance between actors of different races and led to frequent questionable casting to allow for interracial romance on screen.

But Ride the Pink Horse never quite makes it to the screen kiss.  The subtext of the film becomes the text in the final minutes as Gagin wraps things up (not dead, as I assumed) and looks to head out of town.  No happy endings for folks in this movie, but Pila goes from little lost girl to woman who stood up to gringo mobsters in the eyes of the neighborhood.