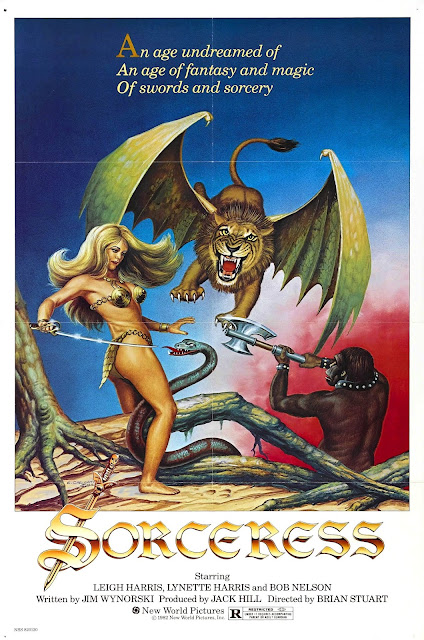 On facebook a friend (Hi, Laura S.) asked if I'd ever seen Sorceress (1982), and I was pretty sure I hadn't.  When I went to look it up on Amazon Prime, I realized I'd once watched the first two and a half minutes of the movie and then gave up.  People - this was a mistake.

The poster above does absolutely nothing to relate anything about the events or actual characters of the movie.  There is a sort of lion-winged thing, a blonde woman and an ape guy.  A snake appears on screen for about five seconds.  But there are two blonde women: that's the entire thing of the movie.  And it seems like that should have made the poster.  The titular sorceress of the film: not shown.


Sorceress is a sword and sorcery movie made in the wake of Conan the Barbarian, arriving in that era alongside a host of knock-offs of popular genre films, including cheap dystopian future movies.   This one features lots of people in a variety of rented robes or armor, or wearing lots of fake fur and making comic-booky proclamations in jenky Middle-Earth speak.


I don't really want to spoil the movie for you.  If I previously argued that you can't judge a movie based upon it's genre but upon execution, this one you can absolutely judge and feel okay about it.  The script is basically a mix of fantasy cliches, nonsense prophecies and poorly executed fight scenes. 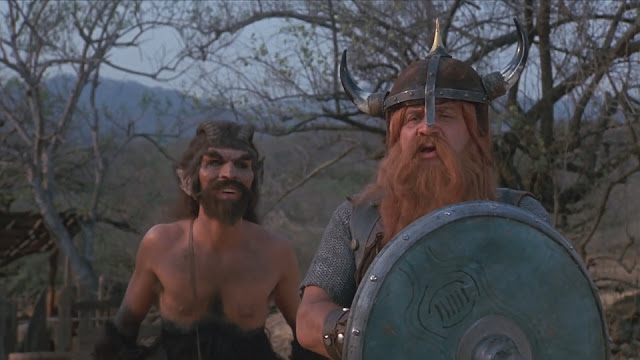 There's a sort of rebellious barbarian prince who is a main character and has a terrible, terrible perm you have to keep looking at.  And an evil wizard who is the father of the twins who is very, very loud about his chastity.

There *is* a sorceress in the movie - and it's the 80's so you can easily spot her as the one who is not blonde but Corman-movie-level attractive.   She wears a sort of gold boob covering, which is a lot more than a lot of the extras get.  She's definitely in the movie, but is not a or the main character, so I have no idea why the movie is called Sorceress.  It *does* sound like a Tangerine Dream or Yes album name, so there's that.

The movie does have the benefit of both being very, very not-good but also full of amazing things that do not seem like the thing you would want to do next, which keeps the movie full of surprises.  I mean, this happens in the final reel just because and with minimal explanation but with massive consequences for every character in the world of the movie:


Let me be clear, this is no Starcrash, but it does have echoes of the same qualities of a genre movie made by and for a specific audience - and that audience was me at age 11-13, although the film does contain enough boobs and vaguely other adult content to be a hard R.

Final note - I wondered what happened to the twins who starred in the movie.  The internet is more or less clear of any history of the the pair after 1991 or so.  But prior to '91?

Apparently the novelty of topless twins was not enough for the two to make it in Hollywood and they returned to the Midwest where they then popped up in a court battle in the late 80's.  Apparently they'd both been "dating" an octogenarian millionaire, who lavished them with money and gifts, and this drew the attention of the IRS when said old man went on to the next dimension.*

Sure, there's a name for the relationship the ladies had with that guy, but I believe they were eventually exonerated of criminal wrong doing.  And that's all I could find.

It's been a few years since I've seen this particular piece of cinema. The best I can describe it is "awkward". Nothing really works in it. I felt like they had a junk drawer of stuff and ideas that they threw together.

The excess of boobs goes beyond what was expected at the time. The satyr makes me uncomfortable whenever he's on the screen. The Viking I guess was supposed to be dwarf but they didn't know what those were. The main guy isn't likeable, let alone a lovable rogue. Even the cover looks like they couldn't be bothered (they pulled from the first line of Conan the Barbarian - "Between the time when the oceans drank Atlantis, and the rise of the sons of Aryas, there was an age undreamed of.").

They *really* went to town on the boob-factor. And I mean, at the earliest opportunity in the movie.

I would be curious to read what the writer was up to, if anything. The rest I can piece together through the power of Roger Corman. Except for the satyr. No idea why they committed to that idea.