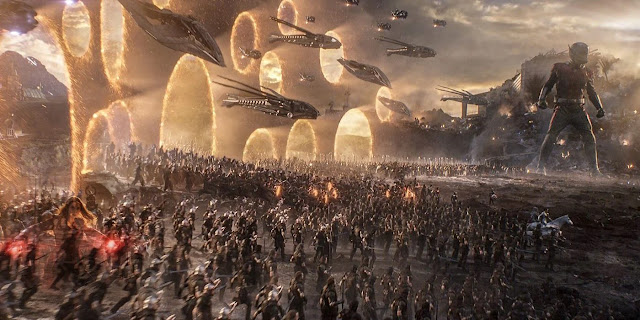 For Jamie's birthday she wanted to watch Avengers: Endgame (2019), one of her favorite recent movies - even if spring of 2019 now seems like it occurred several decades ago.

In a time when we're in lockdown, watching a movie about a group of people reeling in the face of loss, disaster, tragedy and personal failure that impacted a universe is a hell of a thing.


We recently watched the Marc Maron special on Netflix, End Times Fun, and he has some really good bits about how Marvel is a religion for some people.  I'm on the same internet as the SnyderCut nerds, so I get some of his perspective - it's exhausting to listen to people who want to fight on twitter about something that doesn't matter (to you).  And, even *I* get that the Avengers, Star Wars, Star Trek and all of our nerd franchises are crafted media, intended to appeal to certain demographics for certain reasons.  I also get that the younger adults don't take, at least, my Star Trek and Star Wars as seriously as they take their Harry Potter, which gives me a spin on how people of Maron's generation thought of what was important story telling and mythology building during the height of art-house cinema and important-movies-for-adults.

In part from working on the podcast, I've been thinking a lot about "why do people watch movies" to "why do we have fictional stories"?  What is the inherent value in a story about two people going through a divorce and watching them in close-up in an apartment over, say, a teenager bit by a radioactive spider who now has to fight a master of illusion, allegorically deconstructing the illusions of the world as he heads to ward maturity.  I don't want to argue one is right and one is wrong, but I will fight over dismissing either approach - and I'd like to agree that it has far more to do with execution than it does whether you can or can't tell a meaningful story with space ships (frankly, I think if you dismiss those stories, you have a tragic lack of abstract reasoning, but whatevs).

When a story works in the realm of space gods, super soldiers, wizards of magic and technology, etc... you're really talking about working in a mythic realm.  The stories work as allegories or they do not work at all.  And Avengers Endgame, which I hadn't watched as a stand-alone movie, is going to resonate more and less depending on the state of the world, or the state of a viewer's personal world.  At the end of the day, the movie is about trying to find hope in crushing circumstances, and all the forms that hope can arrive - especially when we assemble for the common good.  And that's a hell of a thing to consider right now.