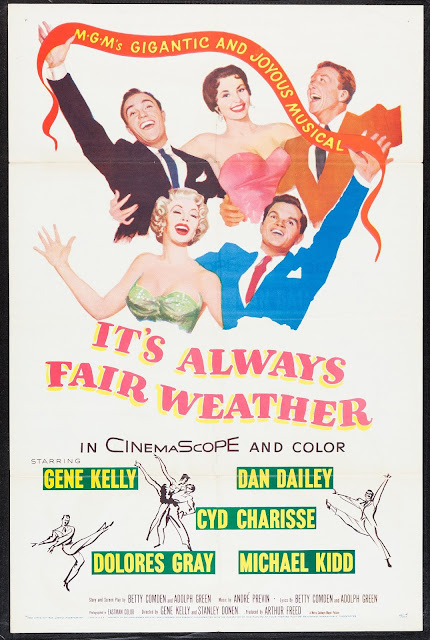 This movie had a lot of things converge to recommend it.  It's from the same writing team that did On the Town from a few years prior, it was directed by Stanley Donen and Gene Kelly, it *starred* Gene Kelly, and, if I'm being honest, Cyd Charisse.


But if you listened to our Xanadu podcast, you got to hear Jamie and me wow at how good Gene Kelly was on skates.  Well, we found out pretty quickly thanks to Nathan, Gene Kelly had done a whole number on skates in this film. It's amazing:

I also declared during this scene that my Roller Derby name would be "Gene Kill-y".

It's Always Fair Weather (1955) doesn't ever quit take off like the best of musicals and hasn't managed to generate any American standards yet, so I think that's an indication of where the music lands.  But it is remarkably watchable, and has some terrific talent in front of the camera.

The plot is pretty simple:  3 GI's return from Europe in 1945 and make a pact to remain pals and meet at the same bar in exactly 10 years.  They lose track of each other immediately but do all show up at the bar agreed upon, only to find - they no longer have anything in common and call it a day.  But they do run across a producer for a live TV show (Cy Charisse) who needs content and decides to trick the three guys back to appear on the show she runs.

Unlike On the Town, only Gene Kelly and Charisse find love along the way as the characters split up, but that's kind of okay!  One guy finds the guy he used to be, another realizes who he is is okay, and, hey, Kelly lands Charisse.

There's also the host of the TV show, played by Dolores Gray, who I don't think I'd seen before, who was both hysterical and a heck of a singer/ dancer.  But, she's only got about four movie credits and seems to have stuck to other aspects of show business, which is a drag.  I really dug her.

The film tries to spoof television, something Hollywood did not want to take terribly seriously in 1955, and which was often crass and ridiculous - much like today's basic cable and network programming.  It doesn't work as well as Singin' In the Rain's spoofing of the silent film transition, but it's still an interesting cultural artifact.

If I can pitch one more thing about the movie, Charisse doesn't get any big ballet numbers, but she does have a great scene in a boxing gym.  This is the second part, and shows off how, geez, she could dance.