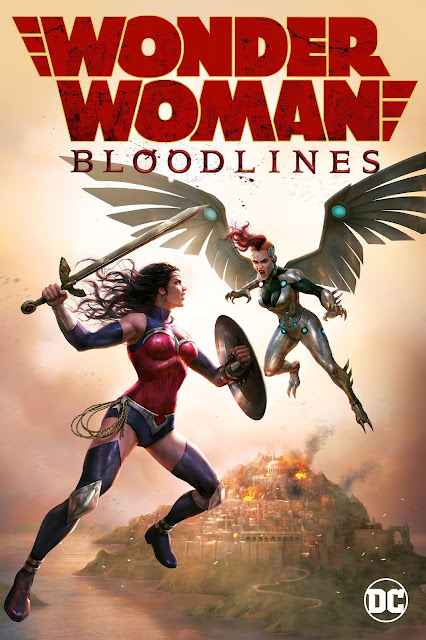 I don't watch DC Animated Films like I used to, but the Reign of Supermen film last year was okay, and I was curious how they were going to handle The Silver Swan, who was on the poster for this movie. Plus, I am not like to avoid a Wonder Woman movie.

For anyone who reads Wonder Woman comics, the story borrows from the Perez era, the Jimenez era and the Rucka era - plus whatever the continuity derives from the DC animated movies, post Flashpoint. I watched with Jamie who has read a good chunk of Wonder Woman comics, but not as much of the Perez era, so I was surprised how many gaps I was mentally filling in which, for her, were larger story gaps.


And it is a *lot* of story, weaving together multiple threads, and trying for a thematic tie of mother/ daughter relationships, a sense of belonging/ being loved and whether one can come home again. The stories as originally presented took place years apart and with a lot of water under the bridge. A mixture of placing the story elements together in bullet-point fashion and an unnecessary (and telegraphed) plot twist keep what could have been a two or three movie arc that might have worked well from ever really gelling in the 90ish minute run-time.

There's a lot to like - seeing Etta, Steven and Diana in action together is pretty great. There's good use of some WW villains and the introduction of Veronica Cale. As has been the case with this era of DC films, they know how to direct action very well. The fight choreography is pretty impressive, the geography and layout of the fights is better than in some of the live-action stuff. Of course, your brain also isn't parsing "what is FX, what is real?" as you're watching a cartoon, so Giganta popping up just works.

I feel like the artists on these films also figured out the designs better than I remember, and Wonder Woman was never their greatest offender, anyway. Steve Trevor is designed and written well - the sort of Steve we've seen a lot of since Rebirth. And Etta seemed to come from this same cloth (but not a single "woo woo"? For shame, movie.)

But there's no arc to what's occurring - our final boss villain just sort of appears from nowhere because someone liked that issue of Rucka's WW. It's just weird - it doesn't fit in with the overall theme and seems like it's air dropping in a new storyline when we're hitting the big battle scene. Yes, it was a cool fight, but it didn't make much sense to introduce an entirely new character in the back 1/3rd as the major adversary. Nor any idea what or why that character is there.

And, yeah, since Andrea Romano left, DC's voice acting - by legit actors like Rosario Dawson - has an odd flat effect to it. It's like the actors aren't imagining they're in any space but a sound booth and have limited time. I am not overly familiar with all of the voice talent - but there's veteran actors in there who've done plenty of VO work, so I don't really get it.

But... I didn't dislike the movie. I just felt like they shortchanged the Kapatelis family in order to rush into the story, and both Vanessa and Julia were mischaracterized for the sake of narrative expedience. There really isn't much like the Diana/ Julia/ Vanessa relationship elsewhere in comics, especially superhero books, and shortchanging Vanessa for "strict mom leads to homicide" was way too many shortcuts, and really undermines what a shock it was in the comics when Vanessa appeared as Silver Swan - and the impact that had on Diana. There's just too much shorthand and too many other distractions baked into the story to make any of it really work on an A-level.