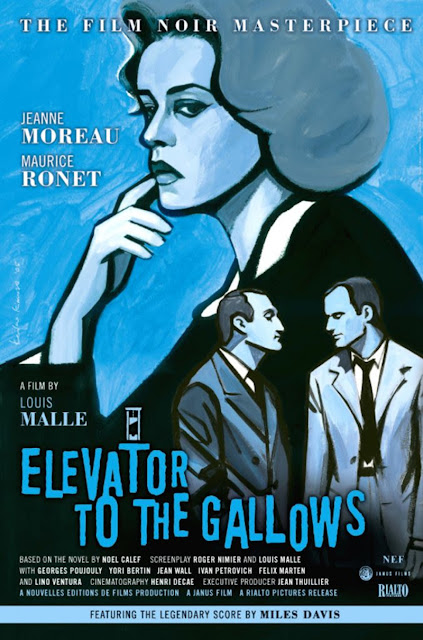 
TCM offered this one up with two hosts for Noir Alley, both Eddie Muller and the terrific Alicia Malone.  One of the interesting things about the post-Robert Osbourne TCM with multiple hosts is that they all have different slants, even within the world of TCM, and they all seem to get along very well.  Malone is a classic film buff, through and through.  She brought the film to Noir Alley as part of her interest in French film, and it's not like Muller can't talk New Wave, which they discuss as generally not including this movie, but... maybe should be?

Elevator to the Gallows (1958) follows roughly a day as a businessman (and former member of the Foreign Legion) manages a daring murder of his boss/ the husband of his lover, the lovely Jeanne Moreau.  But something gets mistimed/ screwed-up, and he gets stuck in the building's elevator as they turn off the power for the weekend - the dead body of the boss still up in the office.

Meanwhile, his car he had ready to go is stolen by a shitty young hood and his enabling girlfriend, and the killer's lady-friend is abandoned, with no knowledge of where he's gone, until she wrongly believes she's seen him as the hood and his girlfriend pass by on the street.

In case the title wasn't enough to clue you in, the movie is a slow march for all of the characters as things turn south in various ways.

I did, in fact, quite like the story itself, which would have been styled incredibly differently in the US in that same year.  But - in France, a year before Breathless, the film plays less like the tightly scripted drama it is - where our leads barely interact - and, instead, manages to feel natural - shot against the city streets of Paris, following three main threads that pull together even as the character's lives unravel.

The Miles Davis score feels a decade ahead of its time, something it's difficult imaging in an American movie til the studios crumbled and let the inmates take over the asylum.  And, despite the fact I think of Davis as very American music, it absolutely works, creating and enhancing the mood of the Jeanne Moreau as she peers through the shop windows, and our characters head into their paths of self-inflicted destruction.

I'm not a connoisseur of French film or the New Wave, and I lack the tools to properly break down and discuss the movie - and I really would suggest you check it out.  It's an experience of a film. 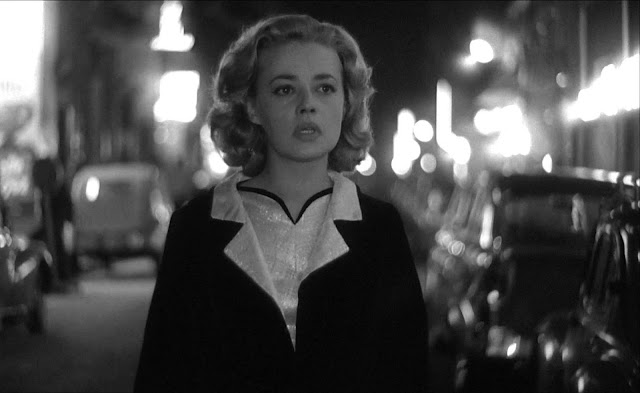 Because it is so relentlessly downbeat, it can be easy to give a movie like this bonus points for realism or daring something - which I think, in 1958, in American cinemas, this movie would have stuck out for those qualities.  I hesitate in 2020 to give it the same nod I would have in my own teens or 20's for the nihilism which wraps the film - I don't know that a bummer of an ending means a movie is smarter or contains, inherently, more depth.

What I *do* appreciate is the deftly assembled narrative that operates in these discordant stories that manage to pull together in just three or four scenes to give us the final shots of the film.
Posted by The League at 7/19/2020 11:32:00 PM