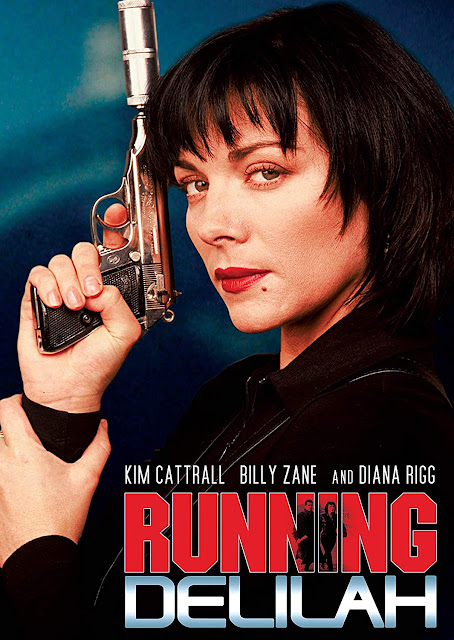 I think this was intended to be a pilot for a very 1990's TV show, probably in syndication.  What's weird about it is that all the pieces are there for what could have been a serviceable stand-alone movie.  In 1993, stars Kim Cattrall and Billy Zane weren't huge stars, but I knew who they were.  The director, Richard Franklin, had handled a couple of mid to low-cost films I'd similarly seen - FX/2 and Cloak and Dagger.   This came out in the wake of La Femme Nikita and multiple RoboCop films.  Instead, it's a reminder of what telefilm and a lot of television looked at during a certain window, and that sci-fi was not always well-served by this sort of production.

Cattrall plays Delilah, an undercover agent for a US law-enforcement agency (I never caught who), , collecting evidence against a Greek arms dealer (who seems to really want to see her eat Greek food for some reason).  Her handler, who is "running" her, is played by Billy Zane.  And the two spend about 7x more time talking about the fact they aren't going to bonetown than they do the case at hand.

Delilah is found out and the baddies take a flying attempt at killing her with lots of bullets.  Zane retrieves the almost-dead agent, and because he loves her (but phrases it as wanting to go to bonetown, because 90's), does as you do and brings her to a French cybernetics guy who happens to work in his building.  There's a bit where she, of course, believes she's a monster.  Remarkably, she gets over it really fast when she finds out she's now the Bionic Woman and can do all kinds of things within budget.  This is one chipper cyborg!


What's kind of kooky is that Zane and Cattrall are good actors.  And it's not that you can't tell - they do well - but the movie feels like a pilot for a TV show that was never to make it to network broadcast. Like, the structure and pacing feels they were just getting us set for either a series of these TV movies (maybe part of the forgotten Action Pack concept), or a running TV show.  But the script and editing don't provide a lot of arc for either Zane or Cattrall.  We're only a few years off RoboCop here, so we have a playbook for how one goes through the  dehumanization of their own body - and that a narrative usually has them coming to terms with such as they overcome the obstacle in the third act.  NOT HERE.  I mean, I give Delilah credit for just going "well, I can never eat food again and the show may be suggesting I have the anatomy of a Barbie doll, but holy cats, I can also do super-karate and play 3-bar blues!  I'm good."

Look, no one is surprised that a movie with two bankable names that has been buried for 25+ years isn't very good.  And, it looks like (a) they shot in Paris, and (b) Diana Rigg is in it trying on an American accent, playing the head-honcho.  So I just have so many questions, but I assume everyone had a good time.  When they weren't going through Zane's kinda painful dialog about the three things he thinks about:  sex, food and death.  Yes, it's as awkward as it sounds and is cutting room floor liner that mysteriously finds its way into the final product.  Maybe because it's the only scenes showing "yes, we went to Europe".

There is a bit of a flying attempt at 1993-era girl-power feminism that doesn't land completely flat, but is on a different frequency than the current convo as they discuss how Rigg's character rose to the top of the ranks.  And they do actually deal with Billy Zane realizing his not-girlfriend is now able to perform normal human feats better than anyone on earth.

But if you go in expecting this to look like even network TV sci-fi of the era, set your expectations slightly lower.  Think USA Network dramas of the mid to late 90's, just before CGI made all things possible and gave us Cleopatra 2525.  This is more in the world of, say, Knight Rider, where it's basic set-up stuff with a touch of superheroics - say, the Six Miillon Dollar Man or Knight Rider.

It's fascinating to think "what if this had taken off?" because it's at odds with Cattrall's career as the only fun one on Sex and the City.  Would Cattrall be doing Comic-Con these days?  She was already in Star Trek VI and Big Trouble in Little China.