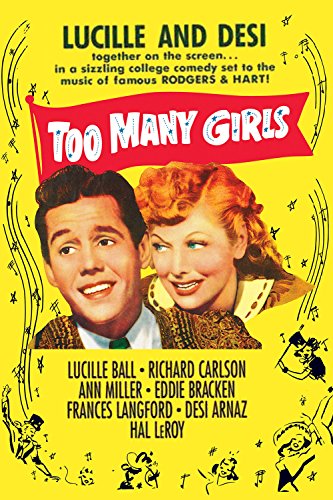 Watched:  09/08/2020
Format:  TCM on DVR
Viewing:  First
Decade:  1940's
Director:  George Abbott
I'd forgotten this was living on my DVR and I needed something to watch on the elliptical - and it starred Lucille Ball.
Too Many Girls (1940) is a particular breed of Hollywood musical that was about big dance numbers loosely tied together with characters working through a paper-thin plot, and really an excuse to get a whole bunch of characters on screen at one time for song and dance numbers.  The better ones are the ones choreographed by Busby Berkeley, and then there's stuff like this with dancers sort of just running around a lot.
There's nothing wrong with a Rodgers and Hart musical, but it's absolute fluff.  Lucille Ball plays a society girl who returns from Europe under a cloud of minor scandal (she'd been kissing boys or some such).  Her father recruits four All-American football players who happen to be nearby into acting as Lucy's bodyguards, but without her knowledge.  The job sends them to a small college in New Mexico, Pottawatomie.
The school is supposedly 10:1 women to men, which is mostly an excuse to have lots of showgirls on stage at any given moment.  But only Lucy really gets a character, and they never really do anything with the idea other than suggest the lead males are popular.  The film co-stars Ann Miller, who gets a credit - but I think she has 3 lines and does some tapping.  It's a reminder that Miller lied about her age, depending on circumstances*, and she was probably about 16-or 17 here, and she's a great dancer already.
One of the players falls in love with Lucy (ironically, not Desi Arnaz, who co-stars.  And this is where the couple met, it seems).  And the guys find their way onto the football field, leading the team to a National Championship or some such.

There's some kinda funny stuff in the film, but I'm not going to kill myself selling you the movie.  It's largely forgettable except for the final dance sequence, and that's mostly the crazy editing.

Anyway - it IS an interesting window to pre-WWII attitudes about college, football, etc...
Oh, and the girls go to the games wearing big corsages that look like Texas Homecoming Mums, which I didn't know weren't a thing elsewhere until years after high school.  But they are a THING, man.
*Miller was working as a dancer in clubs as early as 13, I believe - and no one knew how young she was on the set of You Can't Take It With You, when she was about 15.   So, yes, child labor and all that, but you gotta eat.
Posted by The League at 9/09/2020 12:43:00 AM