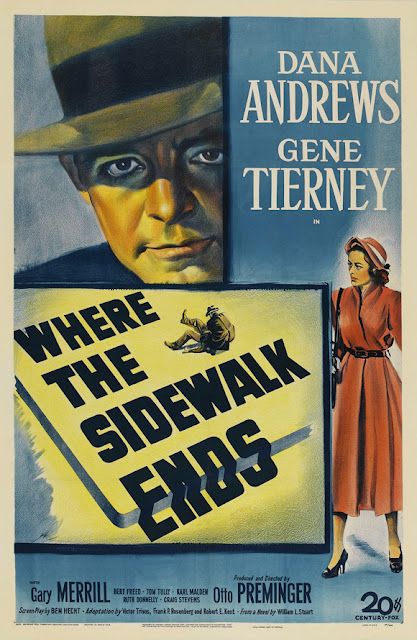 Watched:  10/08/2020
Format:  Noir Alley on TCM
Viewing:  First
Decade:  1950's
Director:  Otto Preminger
Before watching, I had a general awareness of Where the Sidewalk Ends (1950), a movie I've seen listed here and there as a noir-buff favorite.  Starring Dana Andrews and Gene Tierney and directed by Otto Preminger, you'd think I'd have prioritized the film.  I did not.  No idea why.
And, of course, because noir buffs don't tend to oversell movies, the movie does not disappoint.
It's a taught thriller of sorts that places the audience on the side of a cop on the edge, played by a rough-and-tumble Dana Andrews.  He's in career trouble; his colleague (Karl Malden!) was just promoted, but he's getting demoted for complaints of violence, etc...  Which, when you see Dana Andrews in this film, is oddly believable.  He's not the slick charmer of Laura or even While the City Sleeps.  Andrews (at this point having a genuine problem with the bottle) seems to be at a constant low simmer, and with the law backing him up, he's inclined to let himself come to a boil when he feels justified in doing so.
He and his partner are called to a murder scene, and following leads, the pair split up.  Finding his suspect, Andrews and he trade punches.  Only - Andrews watches in shock as the man he just socked (bigger and taller) is on the ground, dead.  In a panic - Andrews - a smart cop - figures how to deflect suspicion and get rid of the body, making it look like the guy split.
The guy was split but not yet divorced from Gene Tierney, who had been with the suspect earlier.  But things get darker and desperate and more muddled as Andrews and Tierney feels sparks.  But trying to cover your tracks can just make things more complicated.
I don't want to give too much away - because I really would recommend you check this one out.  Preminger is working from a Ben Hecht script, and the dialogue is perfection, just as the narrative is taut and won't let you go.  There's something about watching a character try to get away with something they shouldn't (and your unconscious desire to root for them as they do absolutely the wrong thing).  Especially when suddenly Gene Tierney is in play as the love interest.  And, yes, of course I kid about it, because... well Gene Tierney is nothing to sneeze at.  But also - she's perfection in the role of the girl who knows and accepts people who are imperfect, but she's a bit untouched by the grit around her (see: Night and the City).
It's an interesting film to watch during a period where police culture and use of force is experiencing renewed scrutiny.  The film lets Andrews exist in a sort of moral twilight zone - this is noir after all.  He's not exactly murdered someone, it's manslaughter, I think (lawyers, step in and tell me where I'm wrong).  He's caught in a corner while also trying to both solve a crime and maybe find a way to pin the whole thing on the wrong guy.  It's not an unsympathetic look, entirely, but you are watching a lead who freaked out, and the movie makes the assumption that the NYPD would not have his back and assist in a cover-up.  But we also get a police department that wants to rush to a conclusion and just throw a man in jail (and it's taken for granted that he can't win in court, as even the high-rolling attorney they try to get won't help as the case is doomed).
All a little surprising in the Hayes Code-era where cops are supposed to be squeaky clean unless they get their share of justice.  Of course, noir always seemed to find ways to play with that idea, and here I assume the good influence of Gene Tierney driving Andrews' final decision was enough to give the Breen Office a reason to ignore some things and give the movie a pass.  But it is also indicative of the bar we held for cops in movies and, perhaps, in society, that this was the conclusion.
Anyhoo...  terrific film.
Posted by The League at 10/10/2020 02:34:00 PM