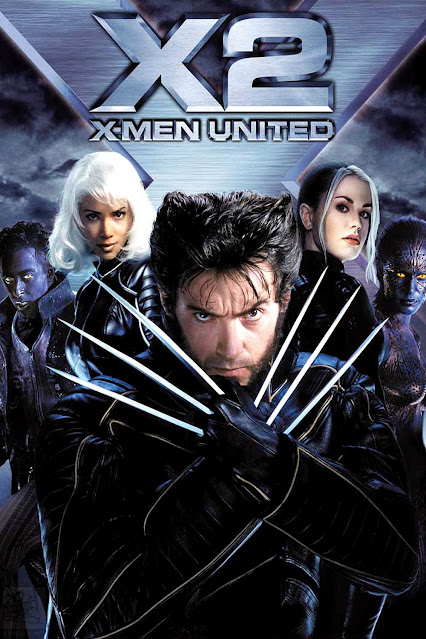 Watched:  03/25/2021
Format:  Disney+
Viewing:  Unknown
Decade:  2000's
Director:  Bryan Singer
Until Logan came out a few years back, I'd argue X2: X-Men United (2003) was the *best* X-Men movie, which may be a sign of how quickly I felt the franchise devolved, but it does wonders to build on the original, expand the world, mine the premise for narrative gold, and set us up for both continuing X-Men films and potential Wolverine spin-offs.
Jamie was asking me if the movie was based on stuff from the comics, and while I could definitively say it was, I also don't know exactly when and who wrote them.  I didn't get to Uncanny X-Men until around issue 170, with the kind of third incarnation of the X-Men, but - and here's my argument to the Big 2 why you just go ahead and keep on your Chris Claremonts as long as you can - all of the stuff from those stories 50-100 issues prior still had impact in what I was reading years after the fact.  The writer knew and remembered the important stuff, and it was woven into the character's lives and informed how they behaved and thought about things. *
This is the one where Nightcrawler (Alan Cumming in weird teeth and a German accent) shows up, mind-controlled by William Stryker (Brian Cox!) into attacking the President so the President will consider some anti-mutant executive measures/ give him funding and a strke force to attack the X-Mansion.
This is the film that doubles down on the mutants allegory subbing it for homosexuality in one painful scene as Iceman comes home with Rogue, Pyro and Wolverine in tow.  It pits our peace-seeking mutants against cops, a military unit, and, occasionally, brain-washed pals. There's some unresolved romantic tension with Jean and Logan, and Rogue and Iceman trying to figure out how to neck without Iceman dying.
Mostly, it's about bad-actors forcing the issue of a potential war between humans and mutants (versus Magneto's plan to make decision-makers into mutants and make it a non-issue) and exploiting the paranoia of anti-mutant forces who want mutants not just identified, but culled.  Especially since their own child was a mutant and there were disastrous consequences.
But also it gives us a picture of the Brotherhood partnering with the X-Men, and it's an enjoyable (if tense) partnership.  I still get a kick out of Magneto and Mystique hanging out at the back of the bus making fun of the nerds up front like catty high schoolers.
In general, my only real beef with the movie is the issue that would blossom into a staple of all future X-films - in this movie, it takes form in the shape of Kelly Hu's "Lady Deathstrike", who has no lines and no one calls her by a name during the course of the film.  By X3, it became more important to show everyone's favorite characters from the comics rather than actually make them characters, which mostly just ended in doing a disservice to characters and story rather than providing much more than a quick jab of fan-service.
Comics like Uncanny X-Men 205 were seminal bits of my comics reading, and this tosses that aside for a "we need an evil opposite" that is - despite a solid fight scene - a dialog-free near automaton is a whole lot of disappointing compared to the original stories.  I would literally have a generic baddy or no Deathstrike if I can't get some of what made the character the character in the first place.  What made X-Men what it was, was character, and while powers informs who they are, it's about personality over their particular set of magical powers.
My other beef is:  Why doesn't Magneto just crush the whole underground base that looks like it's all made of metal?  All the effort seems kinda kooky.  But the X-films always seemed kind of afraid of the implications of Magneto's powers, so...  I dunno.  It's hard to know what he can and can't do in these films.
But, all in all, there's a ton of clever stuff in the movie, and it *feels* like X-Men.  Just a bunch of mutants doing their best in a world that hates and despises them.
*I long ago abandoned X-comics, but it sure feels like they're still circling around characters and plots that Claremont brought to the table in the early 1980's, and made important enough that in 2021, the comics still can't escape the gravity well of those events, but the world they work and live in feel like an extension of those comics versus a reboot or reimagining.  There's genuine history there to be reckoned with.
The entire DCU has had to reboot at least three times since then
Posted by The League at 3/26/2021 12:12:00 AM